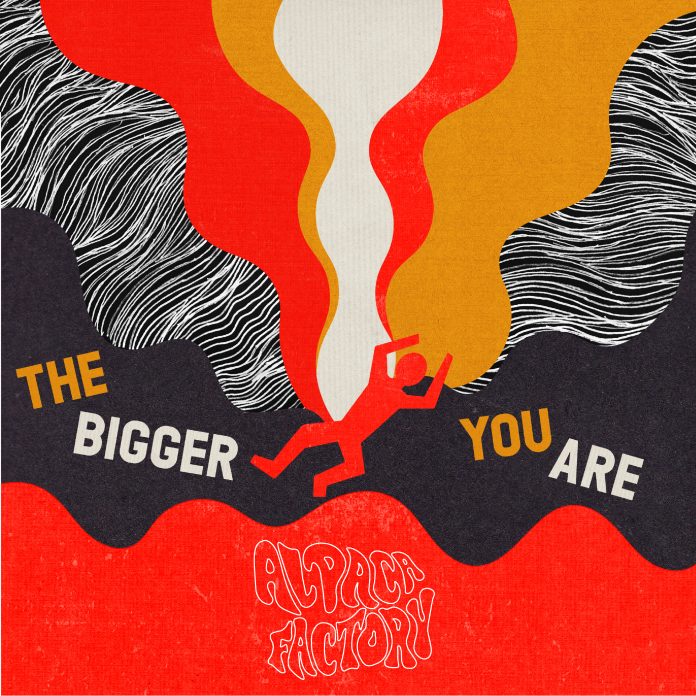 I think I may have to revise my stance that I don’t really like indie, I’ve made so many exceptions to this that it’s getting decidedly untrue. Alpaca Factory is the new exception to the rule.

Lead track on the single ‘The Bigger You Are’ is indie but it’s rockier, it’s basically on that fine dividing line between indie and indie rock, it’s pretty heavy on the guitars. So what is it about this track that made me make that exception? Well, I’ve already mentioned the guitars on it, they’re damn fine. The other thing that musically had me grabbed was the vocals. Tom’s vocals are indie yes, but there’s something about them that is compelling. At times they drift into sounding like The Associates (as does the music in the ‘slower bits’). Talking of the vocals, the words of this song are great. Sometimes words to songs don’t necessarily grab me but in this case, I found myself playing the song repeatedly to get more of the words.

It alternates between slow languid sections and brief frenzies of passion. Again the playing is great, the vocals are fantastic. The words are brilliant. And the thing that really grabbed me is that it’s loose, it’s slightly ragged, it’s not been polished to perfection.

I’ve clearly been missing out, Alpaca Factory are fab. These two tracks show different sides of the band, and both are fantastic. It’s indie yes, but it’s indie that has an edge, the band are doing something of their very own, something that is compelling.

Alpaca Factory formed in 2018 and come from Chesterfield. The band are: