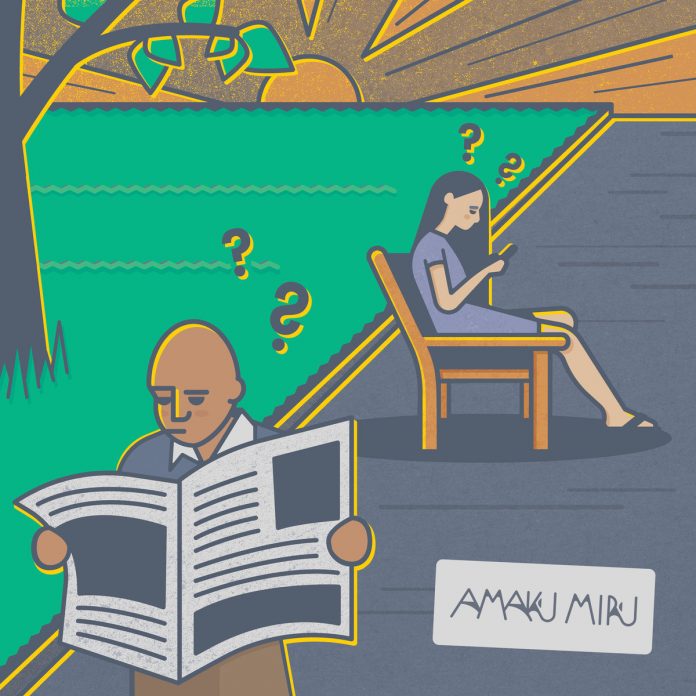 So when Amaku Miru got in touch the first thing I asked myself was ‘why haven’t I heard of this band before?’ and ‘where have they been all my life?’ so taken by these two songs as I was. This is, of course, a case of failing to read the email they sent properly before checking out the link to their music (What, again, you really must remember to do that – Ed). For Amaku Miru are a ‘relatively new band’, although this could mean anything from a month ago to say six months ago.

‘Read All About It’ starts with of all things a kind of chiming bell sound over which a bassline comes in. This bassline is kinda stalky and slow. And then there is gentle guitar – and this is even before the vocals.. But it was the vocals that really and truly had me hooked, for these are female vocals that have vibes of all sorts of strange things – folk, plainsong, weird late 70s/early 80s DIY bands (of which I have way too much of in my music collection).

The thing about this song is that slightly sinister stalky bassline fits the what the song is about – it’s a sarcastic tune about opinion columns and how out of touch they can be with the real world.

Anyway back to the music – gradually it builds, it builds with simmering guitar, then a guitar that is almost blusey in a way, then guitar that is roaring in a sort of restrained way, until it isn’t restrained it’s a full blown almost Samothrace-y guitar thing. This sounds as though it might be jarring, but it isn’t because that voice rings out in the most lovely way over it.

And yes, the more you listen, the more you hear, that the chiming sound sits there under everything else, that there is rather clever doubling of vocal lines in places. That there is this really sparse use of some sort of rhythm track – it’s just this sort of cymbal sound that comes and goes. That I could swear there’s some sort of synth somewhere there. And all of this is mesmerising, it’s hypnotic, it’s compelling.

This would be enough, it’s almost too too much really, but there’s a second track to this single, the rather witty and clever ‘An Introvert’s Guide to Partying’, a party tune about not liking parties. That rather cleverly – although I may be guilty of reading far too much into something musically – uses a bass line that sounds like the one’s you hear in the room or flat next door to a party. It’s kind of a jaunty thing that still has that slightly churchy and folky thing going on in the vocals; albeit in a rather spacey sounding way. And it has the loveliest guitar.

I love and adore music like this. It’s clever, it’s witty, it’s oh-so well put together, it has a charm. And while it’s obviously constructed – look two people couldn’t do this in real time – it has a looseness that is wonderful, it is loose but tight or even tight but loose. It reminds me of music I loved in my youth way back when. It’s the sound of two people treading their own path. And it doesn’t fit into a genre or even a niche that you can put a name to. And while the band may say that they have elements of indie in there, I don’t get that at all, I get the rock thing and the electro thing, but indie nope. And it has elements of so many other things that the description the band give us could be vast. But that is part of the attraction for me, I love music that I can’t describe in any sort of adequate way in a short pithy sentence; the only way you’re going to get a true picture of what it sounds like is to actually listen to it, which I strongly suggest you do.

You can downland the music from iTunes or Bandcamp: https://amakumiru.bandcamp.com/album/read-all-about-it-an-introverts-guide-to-partying

Or stream from Spotify 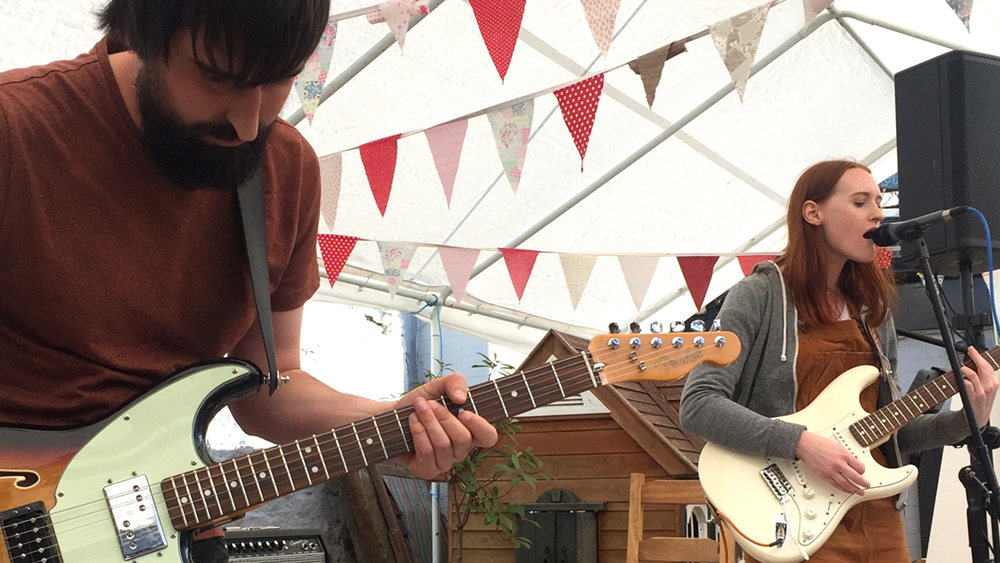 The band say ‘Amaku Miru is a two piece electro/rock/indie band from Leeds, initially formed out of the frustration of trying to keep a traditional four piece band together. Our sound is a mix of live
instruments and vocals and pre-recorded electronic and acoustic sounds.

Our set-up means we approach creating music from an almost backwards place for a rock band – recording and producing our tracks first, and forming our live performance around what we have made after. This also means we are able to add extra layers and collect and mix field recordings into our live sound. Our songs are about the things we know, for example not liking parties and getting angry on the internet. You can listen to and download our music on a wide range of streaming platforms such as Spotify and iTunes’