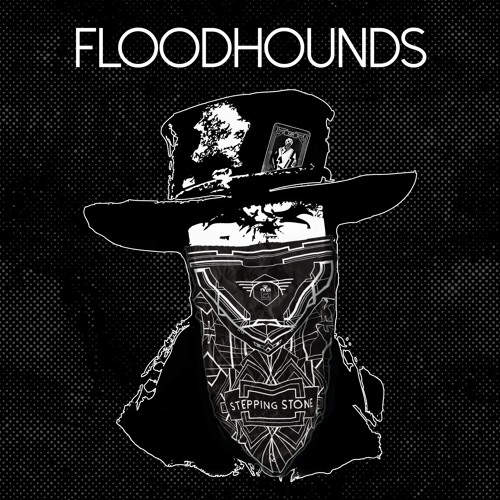 It’s been a while since FloodHounds’ last release, so an email from the band asking whether we could review the new single led to an immediate ‘yep course we could’.

‘Stepping Stone’ is a stomping thing, that trademark bluesy thing that FloodHounds do is still there but there’s something else. Something that took me listening to it a few times before I was able to put my finger on it. There’s more of an indie thing – an old-style indie thing – going on with ‘Stepping Stone’. It’s in Jack’s vocals and the song structure, it’s not in that stomping bluesy riff. There’s other stuff but it’s in the feel, it’s not something I can say ‘well, it’s that and then that’.

This may sound like something that isn’t going to work but it does, it does because FloodHounds know how to write and put together a song, because they can play incredibly well, because they just can, and because I say so.

And once you’ve got past that – and that may take you a couple of listens, it didn’t for me but your mileage may vary – the track rocks, there are hints of a swampy blues-rock thing going on in there as well. In fact the start had me thinking ‘oh boy, FloodHounds have gone all old style blues rock’, that doesn’t last but somehow the contrast between the heavier bits and the lighter bits just makes this song. That and the fantastic drop out section with gentle guitar that gradually revs back up to something huge.

I’m going to have to resort to that reviewer cliché – FloodHounds do it again. This a joyful thing that will you shaking your thang in seconds.