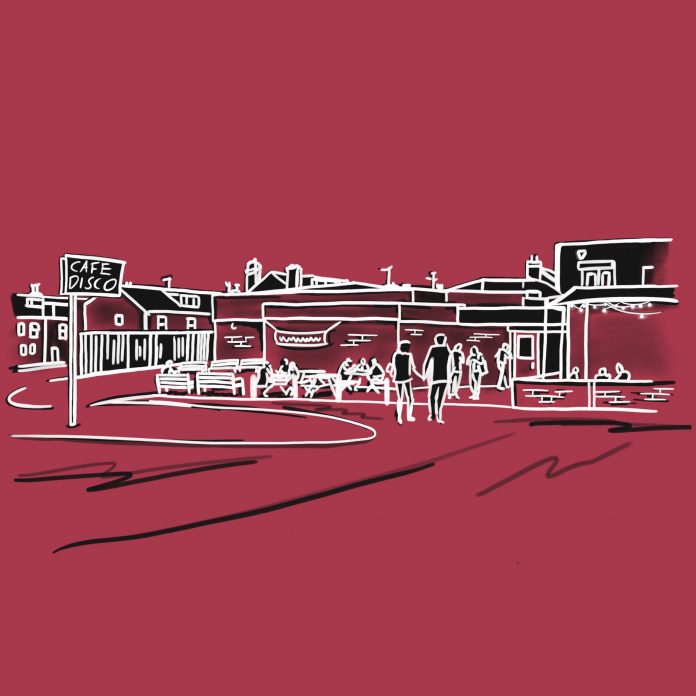 ‘Cafe Disco’ has been part of The Harriets’ live set for some time now, and seemingly for an equal period of time they seem to have announced that it’s going to be released as a single. And finally it’s here, and even better, it’s the lead single from the band’s upcoming debut album ‘Hopefuls’ which is due out on 24th July.

The album is something for the future – I, of course, will be reviewing it so keep ‘em peeled for that – let’s get back to ‘Cafe Disco’. As I said the song’s been a part of their set for a while, and in that time it’s become a firm favourite of mine.

It is, as the title might suggest, a bouncy boppy track, in that Harriets’ thing – big big pop with what I can only describe as umph. It has piano, it has organ, it has harmonies you could live on. It also has that other Harriets’ thing – great words.

There’s something in my head, which is admittedly strange at times, that says It has something of a Squeeze thing going on. It’s in that slightly New Wave approach. It’s in the way the vocals switch between semi-spoken, sang and harmonies. And the difference between this and the live version is that you get to hear Jess’s vocals better which are cool, way cool.

People, this is wonderful. It’s wonderful because it has a tune that’s so damn earwormy, because it makes you want to dance all of your troubles and worries away, and because it leaves you with a huge smile on your face, a spring in your step, and a chorus in your head that you just have to sing again and again. This is 3 ½ minutes of utter joy. It’s summer in a song.