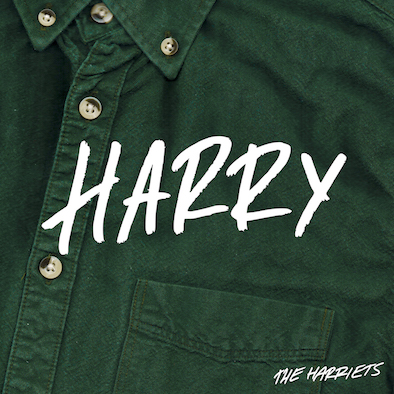 Although I had heard of Leeds’ band The Harriets I’d never heard anything by them until I was offered a chance to review ‘Harry’ their latest single. I got around halfway through the track and I was grabbed and I said yes immediately.

OK so I’d better ‘fess up here, one of the reasons I really liked the track is that it reminds me of one of my favourite 80s garage psych (although we called it The New Paisley Underground sound) bands The Playn Jayn. It’s that dual vocal thing and that sort of rev’ed up R’n’B sound. Plus what we might call a rather prominent bass line that really sets up the groove.

Aside: Personal trivia: The Playn Jayn were incidently either managed or promoted by Neil the Ents VP of Chelsea College where I went to university, he’s actually pictured on the inner sleeve of The Playn Jayn’s live album ‘Friday The 13th’. Nice guy except for the fact that he nearly turned a free gig offer by Marillion. In fact he was going to turn it down until persuaded that this was a bit of a coup. He did however really like Here & Now (after I’d lent him all my Here & Now albums so he he could work out whether he did like them) which makes him OK in my book. The Playn Jayn actually played at Chelsea in a strange semi-underground building usually used as a coffee bar, pool room and band rehearsal space.

Aside over. In addition to the rev’ed up R’n’B dual vocal thing The Harriets bring a slightly out there punky edge. Something that really had me grooving. And I have developed a certain liking for the words of this track which are just brilliant. Look any song that starts with the line ‘Harry wears a green shirt’ you know is just going to be fab, and this song is fab, it’s really fab.

Look this isn’t anything deep and meaningful it’s a just a huge blast of fun, a huge blast of slightly fuzzed up, raucous R’n’B influenced punky edge psych. Add in those vocals – all slightly loose and a guitar solo that just thrills, and it leaves you with a huge smile on your face and tired dancing feet.

Put this on, get up and get down, repeat till exhausted.

The Leeds-based duo, made up of the musical minds Daniel Parker-Smith and Ben Schrodel, have made waves in the Yorkshire music scene since day one, being chosen by independent industry expert judges such as Alan Raw from BBC Introducing and organisers of festivals End Of The Road and Tramlines to work with Higher Rhythm as part of their Breakthrough development programme. More recently the duo have been picked up by BBC Introducing and BBC 6 Music’s Tom Robinson.

Daniel and Ben form the perfect formula, dealing in jangly, melodic tunes, with a focus on the bright distinctive vocal harmonies. Adding another layer to their live shows is Ryan Bailey on the drums.

As well as writing and producing their own music, The Harriets create content based around their DIY musical process, which you can watch on their YouTube here – https://www.youtube.com/watch?v=UnpamMW41ZA