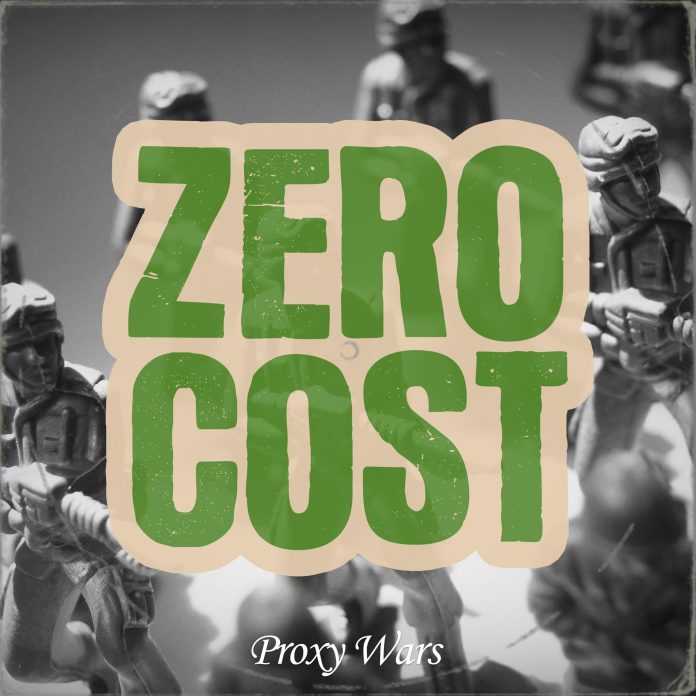 Hull’s Zero Cost do raucous as fuck hard punk with a message, a meaning. And this is just how it should be. Got that, good, let’s delay no further.

‘Proxy Wars’ should need no explanation, after all we’re in one right now. But this one is not the first as the ‘found speech’ at the start of this track reminds us. We are talking breakneck raucous ear pounding here, with guitars that slice. The odd sound that you might identify as metal. This, and this is no surprise, rocks musically, and gets you thinking.

Now ‘Moving Up’ was a previous stand alone track, this is what I said then. Yep there’s still those metal elements but this is punky as fuck. Played at breakneck speed, vicious guitar upfront and centre, vocals spat out in a tumbling rush, drums thrash. The song seems to be about not being held back by society, making the most of your life and fulfilling your potential – from what I could work out, those words come thick and fast.

The final track of the three is a surprise. ‘Tartuffe’ is a weirdly almost folky sparse guitar and voice track that kind of reminds me of early Rainbow in what I can only describe as a completely bizarre way. The title is going to need some explanation – I had to look it up – tartuffe means ‘a hypocritical pretender to excellence of any kind’. From what I can work out, and I may be wrong, it’s a call out to bands that don’t live their music, who just put on an act.

The more I hear from Zero Cost, the more impressed I am. This is a band who do it right, fucking right. The writing, the playing, is just so good. And while they have a sound, the songs don’t do same-y. And the unexpected ‘Tartuffe’ shows me that they are a band prepared to step out and do something fantastically different. Blast your post New Year cobwebs out of your brain with this.