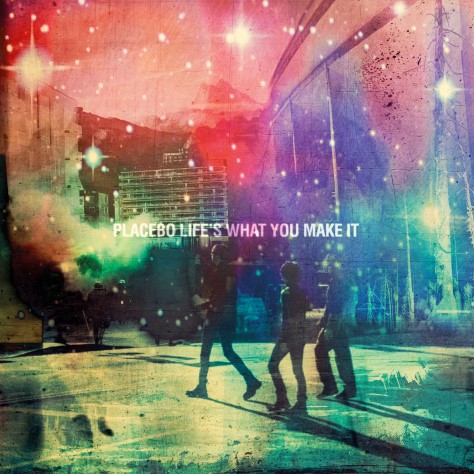 An unmistakably 21st-century take on an 80s art-rock classic, complete with a thought-provoking short film. Watch the video here

For a band with such a strong and unmistakable catalogue of original material, Placebo have always had an impeccable way with a cover version. Starting with a take on Syd Barrett’s ‘Dark Globe’, way back in 1996, they have freely interpreted the songs of others to complement the originals. Their choice of covers – from Nick Drake to Boney M; Serge Gainsbourg to Depeche Mode – demonstrates Brian Molko and Stefan Olsdal’s musical influences and heritage. Rather than keep their musical passions locked in an ivory tower, they approach each interpretation with an excitement to share what they love.

With its sledgehammer beat and Molko’s keening vocal, ‘Life’s What You Make It’ – the lead track from last year’s EP of the same name – instantly reminds you of all the reasons you fell in love with Placebo. There is a great deal in common with the work of Talk Talk (who sang the original in 1986) and Placebo: both remained true to their artistic vision, even if that has sometimes meant not taking the easy route. The song’s message of making the best of circumstances strikes a particular chord in the challenging era in which we live.

“We covered Talk Talk’s Life’s What You Make It because it is a song from the 80s that we still liked, and wondered if we could replicate Gwen Stefani’s global smash hit with her band’s cover of ‘It’s My Life’. That remains to be seen…” Brian Molko says.

Molko wanted something different for the film to accompany their song. He had a concept in mind that was loosely based around the original 1986 Talk Talk video that was shot at night on London’s Wimbledon Common. It featured the band surrounded by nature, complete with, as Molko puts it, “little beasties crawling over leaves”. Brian felt that there could be an updated version, where “the band would be robots playing instruments and that e-waste would replace nature, as it appears to be doing only a few decades after the song’s original release”. The brief that the band put out to prospective directors was short, simple and open to interpretation: “e-waste, please!”

It’s not that Placebo were inundated with appropriate responses. Brian continues, “The only director who actually came back to us with a treatment about e-waste was Sasha Rainbow. I called her up to sound her out and discovered that I was speaking to a very brave and passionate woman.”

Rainbow’s accompanying film for ‘Life’s What You Make It’ was shot in Agbogbloshie, a former wetland in the heart of Accra, in Ghana, which is home to one of the world’s largest electronic waste dumps. It sets an apocalyptic backdrop of first-world waste against the daily lives of those who inhabit this thoroughly otherworldly space.

“I told her that she had balls of steel for actually daring to go film on location in Ghana and that, no, we would not be coming, since we were timid little souls,” Molko says.

“The two boys in the film live in this extraordinary place,” Rainbow says. “Which for me, highlights a human’s ability to adapt with incredible strength, resilience, and humanity.” It is a compelling look into a world that few know exists: “I hoped to capture the environment in a dreamily meditative way that would at once juxtapose and yet synergise with the theme of the song, and glimpse at part of the repercussions of our current technological revolution. On the one hand, technology is enabling us to create things beyond our wildest imagination, and yet little discussion has been had about what to do with all our discarded e-waste.”

“I think that it is important to stress that the video is not anti-technology,” Molko adds. “That would be ridiculous, considering how much it enriches our daily lives. To me, it is about the triumph of the human spirit in the face of adversity that has not been chosen. We do, however, hope that it will make the viewer think about the repercussions of just throwing away tech that doesn’t work anymore. There are several new and ingenious ways to recycle tech these days. Some companies will even give you money for it. All it takes is a little more effort.”

One of songwriter Mark Hollis’ key phrases in ‘Life’s What You Make It’, “yesterday’s favourite”, is sung so powerfully by Molko, and underlines the e-waste message strongly in the film; yet it is far from being downbeat – the boys are seen dancing and laughing, making the most of their circumstances.

‘Life’s What You Make It’ continues Placebo’s remarkable run of singles, and its accompanying short film will provide one of the most thought-provoking moments you’ll have all year.

We are delighted to announce that Placebo will be returning to the UK to play a run of dates in October.

Fans have the opportunity to get tickets in a special 48 hour pre-sale that begins at 9am on the 7th June via www.aplaceforustodream.com