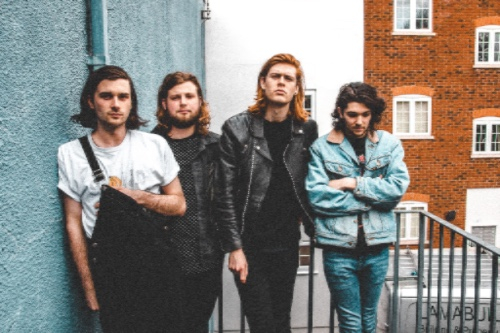 The Amazons are officially the most hotly-tipped guitar band of year after featuring on all of the biggest tips for 2017 lists. And things are still hotting up for the quartet with the release of their new single ‘Black Magic’.

After the ominous atmosphere of their previous single ‘Little Something’, ‘Black Magic’ takes a brighter, more playful approach to their revered alt-rock onslaught. Their relentless rhythmic drive continues unabated, but the track’s spiralling guitar motif immediately lays a foundation in the mind while frontman Matt Thomson adds an adept falsetto to his already mountainous vocal range.

“This song has been 3 years in the making. We had some of the parts floating around without any direction until I wrote the chorus, which gave the track focus.” Thomson marks, adding “Black magic is about the helplessness you feel when you realise the feelings you have for someone are no longer reciprocated. The despair at the awareness that there is nothing you can do to change the way they feel.””

‘Black Magic’ was produced by the band’s regular collaborator Catherine Marks (Wolf Alice, Foals, The Vaccines) and was recorded in Flood and Alan Moulder’s famous Assault and Battery studio in London. Both ‘Black Magic’ and ‘Little Something’ will appear on their eagerly anticipated debut album which will follow later in the year out on Fiction Records.

The Amazons’ first show of 2017 was a short set before a tiny audience at the BBC’s Maida Vale Studios for Radio 1’s Future Festival. They’re now poised to hit the road for the following dates which include a London show at Dingwalls and a homecoming gig at Reading’s Sub89: