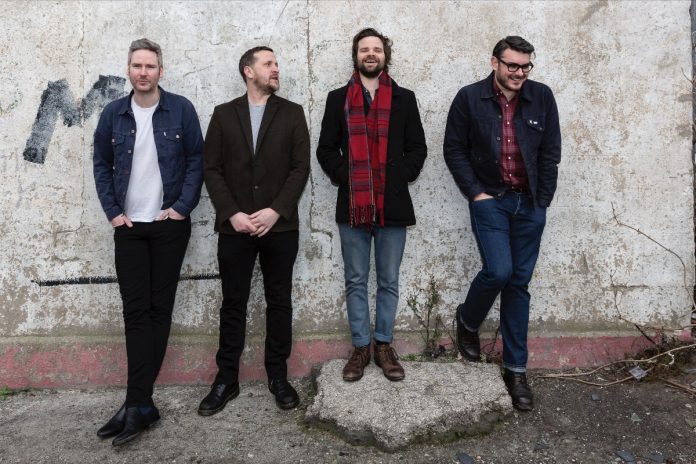 ‘Powers’ is The Futureheads sixth studio album and their first electric guitar release in almost a decade. Recorded and self-produced at Newcastle’s First Avenue Studio, ‘Powers’ is a record that looks “at the balance of power in a personal, political and relational sense” and puts it to some of the most vital, invigorated material the band have made since their first steps.

Lead single ‘Jekyll’ received its first radio play on 1st May from 6Music’s Steve Lamacq and has since been played by Marc Riley, who recently had them in session, and Shaun Keaveny, who made it his single of the week. It has been played by Radio X’s John Kennedy who made it his X-Posure show’s ‘Hot One’, and when Felix White sat in for him, he interviewed the band. The band also recently did a 5 Live Session as well.

Having first emerged at the start of the ’00s amidst a burgeoning swarm of guitar bands, the Sunderland quartet, with their proud regional accents and spiky, playful sensibilities, stuck out from the off. Over the following decade The Futureheads – comprised of vocalists and guitarists Barry Hyde and Ross Millard, vocalist and bassist David ‘Jaff’ Craig and vocalist and drummer Dave Hyde – amassed five critically-acclaimed albums, headlined countless tours and earned an NME Single of the Year accolade for their iconic cover of Kate Bush’s ‘Hounds of Love’.

Returning with ‘Powers’, the band’s aim is one of forward motion not nostalgia; though the quartet could probably rely on the successes of old to push them through the next couple of festival seasons, that isn’t – and hasn’t ever – been the point. “Obviously it’s an absolute privilege to come back and still have fans and that’s something to cherish,” Ross says, “but I also think we’ve got a bit of a job to do about letting people know that there’s more to this band than you might have thought.”

It’s a risky statement, but one that’s confirmed immediately once you press play. Across the album, the band push further, melodically and lyrically, than ever before; there’s no safety net here, but a band putting everything out there and driving it to the wire again. “I love the thing Bowie said about how an artist should be slightly out of their depth because that’s when you get the good stuff,” Barry affirms. “Or as David Lynch says, ‘If you want to catch the big fish, you’ve got to go deep.’”

Cumulatively, it’s a record that kicks harder and more intensely than you might have ever understandably predicted. “The record we’ve made is a little off kilter and maybe a little more out of step than you might expect from four lads in their 30s. I think it might surprise people,” smiles Ross.

But if you were ever a fan of The Futureheads, or – just as importantly – if you were never a fan of The Futureheads, you should get the same thing from ‘Powers’: a record that sounds invigorated, with something important to say and an idiosyncratic, exciting way of saying it, made by four people here for all the right reasons. “There’s power and sophistication and simplicity, and it’s bloody hard to play, which I think will keep the shows interesting because we’re on the edge of our abilities with this,” grins Barry. “It’s musical audacity: that’s what this album’s about.”

The band, who have just finished a successful tour of the UK that included a sold out show at The Garage, London, have just announced a December UK tour that will kick off at the Electric Ballroom, London on the 6th. The tour celebrates 15 years of The Futureheads and will see the band playing their debut album in fullalongside new and old favourites.Catch them before that over the summer, where they will play festivals across the UK and Europe. Details below.