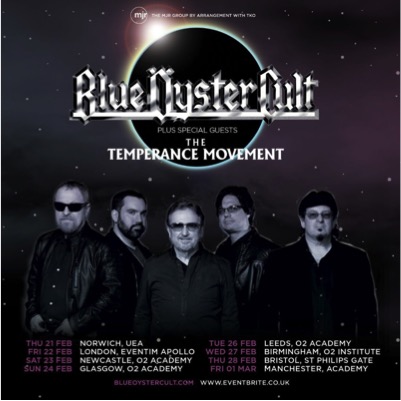 Blue Öyster Cult have announced a UK tour for February 2019. Supporting will be acclaimed blues rockers The Temperance Movement. Since formation in 2011, the band have made a huge impact with three studio albums including their most recent A Deeper Cut, which includes the latest single ‘Caught In The Middle’. The band are also a notorious live entity having honed their craft opening up for the likes of Jamiroquai, Ray Davies, Feeder and The Rolling Stones.

Over their four-decade career, Blue Öyster Cult have established themselves as one of the most iconic bands of their time, with a repertoire including the hits ‘(Don’t Fear) The Reaper’, ‘Godzilla’ and ‘Burning For You’.

Following their highly-acclaimed performance at last year’s Stone Free Festival, which saw the band play their eponymous debut in full, Blue Öyster will play eight dates, starting in Norwich on February 21st and finishing in Manchester on the 1st March.

Full tour dates can be found below.

Tickets go on sale at 10am Friday 27th July and will be available here.