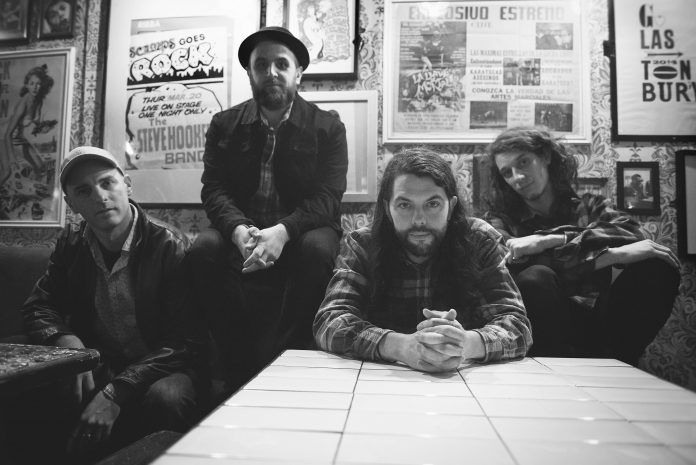 TRUE STRAYS have announced a UK Tour this Spring around the release a brand new single: ‘Campesina’

‘Campesina’, recorded on 8 track tape in New Cut Studios, Bristol, on analogue equipment, is the first single from the forthcoming debut album from True Strays. The song was recorded in one day as a challenge to recreate the studio process of the pre-digital era. Tracked live, Campesina (Country Girl in Spanish) is a joyous declaration of love between two people from different worlds and how by celebrating our shared commonalities and connection to the land we can overcome our differences. The track will be released in conjunction with the UN’s World Happiness Day on the 20th March. “This year’s theme is Happier Together, focusing on what we have in common, rather than what divides us.”

The challenges of forming a band mean that most split up before they even leave the practise room. True Strays met in a sandpit when they were in playgroup and have seen many a great band fall by the wayside. But despite many previous band break ups and hard knocks, Joe James and James Cameron are using these personal experiences to fuel their latest endeavour with greater urgency and honesty than ever. Lifes too short to hide yourself and give up on your dreams. Based on friendship, honesty and hardwork, True Strays is the culmination of a life times ambition.

True Strays make sounds for an America that didn’t quite exist. Influenced by the blues of Willie Dixon, the calls for justice of Bob Dylan and Neil Young, the dirt of QOTSA and the sonic brilliance of Alabama Shakes. Not just brainless rockers, the music is concerned with zero hour contracts, the destruction of the National Health Service, climate chaos and the mental health epidemic.

From sand pit beginnings, the band have completed countless UK tours winning fans old and new, supported bands as diverse as My Baby and Elles Bailey, been jump started by Keith Allen, played by BBC Introducing and BBC Radio, played their first European dates, survived 70+ festival shows at prestigious festivals like Green Man, Boom Town, Larmer Tree and Shambala, been featured on the Spotify Nu-Blue playlist, and even curated their own venue for 5 years at the now legendary Fieldview Festival.

“It’s a dream for your band to be the reason to visit new places. We can’t wait to meet new people and share our latest music.” – Joe James

“This tour is our most exciting one yet because it’s a full UK tour. It’s always been our intention to get up to the North of England and Scotland and now it’s happening!” – James Cameron

Beyond The Horizon Tour