The Battery Farm make raw, sometimes raucous, visceral music. This, their second EP, has build on that, they’ve stretched out and showing they are capable of much much more.

The first indication that this is something more than just a collection of songs is that this EP starts with what I’m going to call an ‘introductory sound piece’ called ‘Don Brennan’s Lament’. I’m guessing that this is a nod to the Corrie character, and not the baseball player, given their Manchester origins. Although given that the band are mischievous characters it’s quite possible that they are referring to the cricketer.

The first track proper is ‘When The Whip Goes Crack’. This does the quiet/loud thing – tuneful and melodic and then hard and heavy as fuck. And remember that the band are gutter punks, both of these come with a punk attitude and sound to the max. That contrast between the melodic and the heavy is an absolute joy.

‘I’ve Never Been To Gorton’ is, at heart, a modern take on old style punk. The modern take is that this song has lots of clever touches – clever little sounds that pop up, My helpful friend says that it has something of a punk indie feel; I get that. It is of course about parts of Greater Manchester that have been visited but not, as you may have worked out, Gorton.

Another interlude – ‘Sunita’s Last Gasp’. Given the previous reference to Corrie, I’m guessing this is another.

‘Drowning In The Black’ starts eerily; sinister sounds swirl, a rhudding bass. And then it starts to gradually take off. It has, to my ears at least, a sound that mixes ‘that Manchester Sound’ and post-punk. Guitars stab and slash, fast as hell sections that positively reek of loud punk. It’s angry, it’s raw, it’s more than a little bit scary. 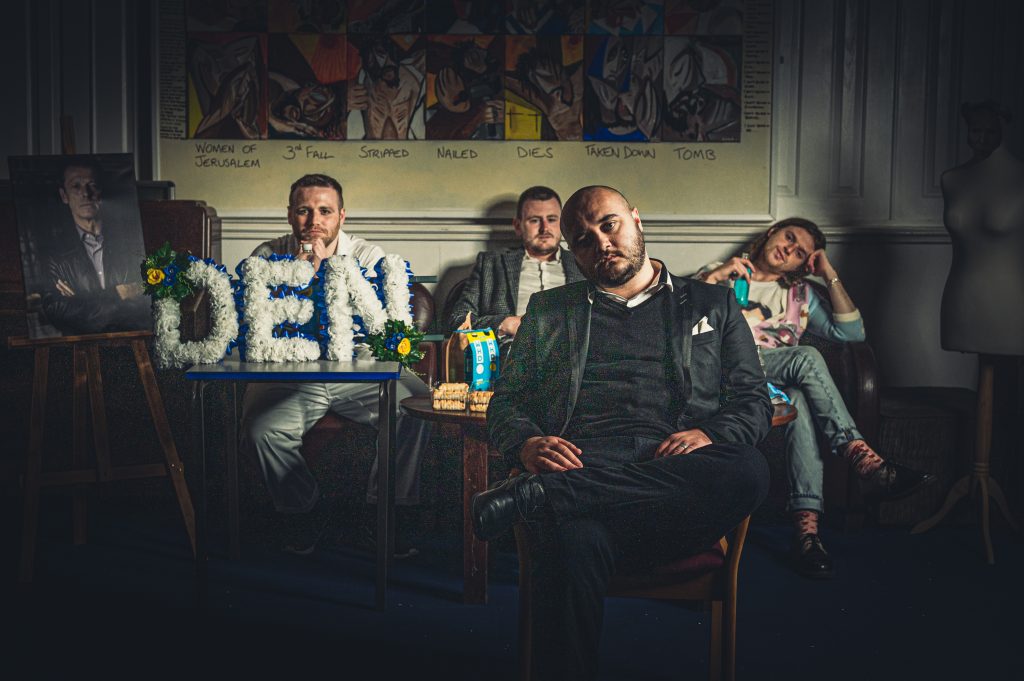 And now for something out there, loud and heavy. An unholy mix of punk and heavy rock ‘Roy Keane Isn’t Real’ hammers you into pieces, it roars out of the speakers. It dares you to throw yourself around violently, to annoy the neighbours.

Another interlude ‘Michael Rodwell Dies Alone’, another Corrie reference. There’s a kind of connection in the interludes, isn’t there? One that goes beyond Corrie.

Oh fucking hell do the band throw in one last surprise ‘We’re At The Top’. A ballad, a lament. Glorious backing vocals, slightly Spanish guitar, a lead vocal that tears at your heart. Gorgeous swells of sounds that astound. A build that takes you to the top and let’s you down gently.

This wasn’t quite what I was expecting. Yes it’s raw and visceral, but it’s taken that and added sophistication and cleverness. The great thing, the best thing, is that while the music has all these touches, it still has that punk attitude. This is music with attitude and soul. Music that is grounded in the band’s life. It is ‘real’, not constructed. It’s a band doing their own thing because they love it.

This EP is incredibly impressive. The individual songs shine through but the whole is so much more than the sum of the parts. It demands your attention; it makes you want to listen to the whole not skip and choose. Fantastic stuff, listen and be amazed.