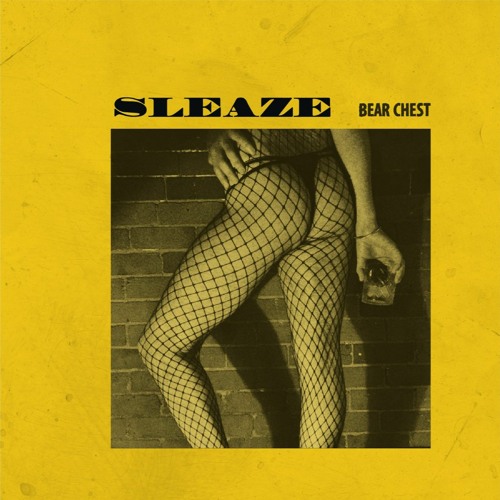 Three years ago I reviewed an EP from Sheffield band Bear Chest called ‘Leather and Sweat’; I loved it. So it’s been a while. But now we have an album of Bear Chest goodness.

Before I dive into the review I need to tell you something about the EP. Bear Chest played heavy, no heavy heavy, loud music. Glorious but it felt a little like having your head rammed into a brick wall repeatedly; I mean this, of course, in a good way. This album, however, had surprises lying in wait.

The opening track – ‘Holy Roller’ – is different to what I reviewed 3 years ago. It’s still loud, bass heavy, and hard riffing but it kinda sits in a psych-grunge space rather than a metal/sludge rock space. This is not in any way a criticism; I can’t imagine that a band would stand still completely over a period of 3 years. The kicker is that sometimes over that hard fast riff the vocals are the sweetest. It’s the contrast that makes it fantastic.This thing comes at you like a tidal wave; occasionally pausing for breath before it hits you hard again.

‘I Know You Hear It’ does that bass and grungy guitar intro; this signals something different is on the way. It jerks, it jerks good. It’s kind of like psychedelia as interpreted by Black Sabbath. The weird thing is that what you left with is that this has a great tune that stays with you. And a great guitar break.

Ah now, 70s heavy rock. ‘Burned Away’ is heavy but it has a groove to die for. The vocals come on like a sinister preacher while the riffs lay down a bed of sonic joy. ‘Don’t Feed It’ continues that heavy with a groove theme. Guitars stab out. Hints of Led Zep in the feel – it’s that swing, that groove. And then a guitar break that thrills.

‘Swinger’ is slow, way slow. Grinding guitar, vocals buried in the mix. This is all good, in fact very good, But the extra here is the drumming, which is mainly splashes of cymbal, because it follows that grinding riff so closely. You sit and wait for the track to speed up but it doesn’t, it appears to slow down – a searing guitar. Wonderful, quite quite wonderful.

Suddenly it’s a faster track – ‘Strip The Leather Away’. What I get here is 70s Heavy Metal – it has that guitar riff feel, the ‘screaming vocals’. But it’s way bassier than 70s Metal. But then it drops out to a bass note repeating before it blasts into noise.

‘Snake Breath’ burns, it burns hot. Guitars grind, on the edge of being out of control vocals. Words that tell of something I can only describe as disturbing. Soundwise- let me think – Mutant Black Metal is what I’m getting.

‘Eat From The Inside’ reminds me of something I can’t quite put my finger on. Oh wait there are hints of early Sabbath, more than hints, What I can only describe as NWOBHM guitar solo. It’s a mash-up that becomes something all of its own. Glorious.

‘Red Cavern’ is a surprise. It starts with a rattling beat, delicate guitar, then a quiet voice. It’s hypnotic, melancholic, atmospheric and moody. And gradually it builds; guitars start to boil, and then it explodes but briefly. It quietly makes its way into your head and sticks there. The builds come at times you just don’t expect. This is epic; Bear Chest’s take on a big epic 70s rock track.

Another surprise – ‘No Love’ is a guitar and voice ballad. I was so shocked by the change in tone I had to go and check whether I was still playing the Bear Chest preview stream. I was. It’s simply a lovely song. Album closer – ‘Bleeding Through The Eyes’ – is another riff laden grinding guitar track. With the most incredible 70s sounding guitar break I’ve heard in a long time. A great album closer.

This album is both what I didn’t expect and what I expected. Yes, it’s mainly loud, grindy and bass heavy but there are things I didn’t expect – that psych-grunge feel, the light and shade in some of the songs and that acoustic ballad. BUT it hangs together, at no point – except for the ballad – did I feel I wasn’t listening to Bear Chest doing their thing. And that ballad, make no mistake, is wonderful.

And their thing is fucking fantastic; it burns, it grinds, you feel it through your whole body. It’s played brilliantly – the guitar, bass, drums and vocals can’t be faulted. And this is in no way mindless noise – and let’s be honest it could be – there are inventive sonic touches all over this album.

This is an album of music made by a band taking guitar based rock – in all its guises – to the edge and beyond. Play loud enough to wake the dead and wallow in its glorious fucking sound.