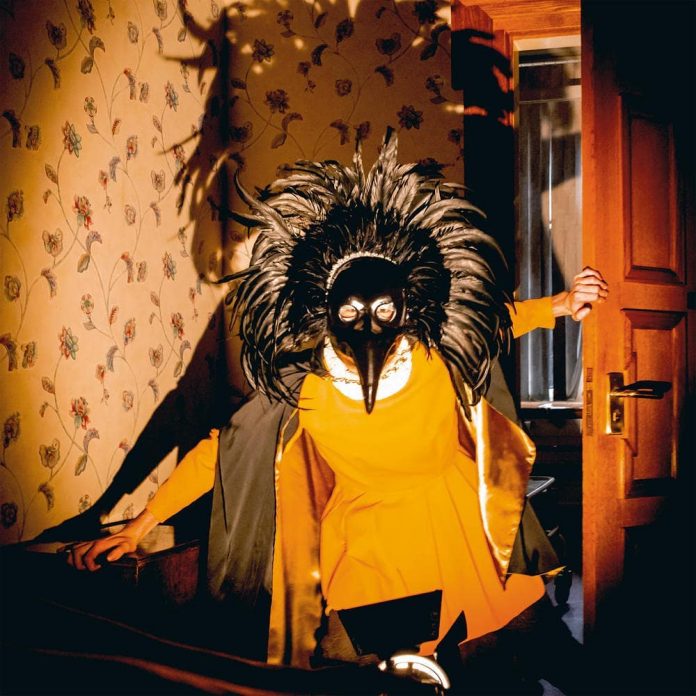 This one of those ‘hmmm not sure about this, I’ll just try listening a bit more, hey wait a minute there, this is brilliant’. Drenge are new to me, yep sure I’ve heard about them, but I’ve never actually – to my eternal shame – listened to anything by them. I’m regretting that, I’m regretting that big-time.

So at some point in this review, perhaps now, you’re going to expect me to tell you what they sound like – it’s here I have what might be described as a problem. It’s just not easily summed up. It’s kind of loud and kind of hard in places, it has sounds that remind me of post-punk way out there electronic music, it has bits that remind me, of all things, Bauhaus. It even has things that remind me strangely of Soft Cell, Siouxsie and The Banshees, Nick Cave, The Band of Holy Joy and The Associates. Some of it is what I’m going to call epic and huge, and some is strangely intimate. It’s somewhat retro in a late 70s and 80s sort of way but on the other hand it’s just of now. It’s kind of timeless.

And the songs have so much variation, differences in feel, that saying that they are this or that is just impossible. There isn’t an easy way of reviewing this, one approach would be to try and tell you what each track is like, another might be just to pick my favourites and cover those, and yet another might be just to tell you it’s brilliant and you should go and get this into your collection immediately.

Let’s discount the third, that seems like a lazy bad reviewer approach. The first seems perhaps a little tedious for you the reader. The second seems to be the best compromise I guess, so we’ll go with that. So here we go.

The opener ‘Bonfire Of The City Boys’ is strangely kinda New Model Army, it starts with a long section that is spoken words over this bass thing. It sounds dangerous, there’s a threat. It crashes into a whirling spinning sound that is part guitar and part something else. The spoken words return. The whirling sound returns. It is stunning, it is attention grabbing.

‘This Dance’ has a kind of mutant post-punk, mutant Goth thing going it. It swirls, it swirls fast. It never let’s up. The guitar kinda rips at your brain, it stabs, it hurts if you play it too loud. But it’s a good hurt, it’s hurt I need.

‘Teenage Love’ is all strangely retro – but then again not – synthy, it’s all bass synthy. It has perhaps nods to electronic music from the band’s home town Sheffield. But it has a groove, you could, if you were inclined, dance to this. It would be a strange dislocated jerky dance but why in the hell not.

It’s all sinuous ‘Strange Creatures’, it twists and turns. It has the epic and huge thing going on. The soundscape in this track is huge. It is strangely conventional in the context of some of the other songs. It brings to mind The Associates, a host of post-punk bands. It has the loveliest ringing guitar that runs through the song.

Not to allow us to get complacent ‘Prom Night’ is one part Nick Cave and one part 50s death ballad and one part Band of Holy Joy. It has of all things a saxophone. It might strike you as a kind of light relief from the rest of the album, some kind of parody but it isn’t. It’s strangely compelling, strangely moving . It’s fantastically put together, it has these sounds in the mix that surprise, that thrill. It is a joy.

In contrast ‘Avalanches’ is all fuzzy guitars, bright keyboards and buried vocals. I guess you’d call it kinda shoegaze-y. It’s all slow and hazy. But there’s this epic keyboard that pushes through. It has a tune, it makes you want to stand up and sway to the music. The louder you listen to this, the more it just takes over your head, it invades it.

And just what the is going on with ‘When I look Into Your Eyes’. It has this weird backing vocal thing, acoustic guitar, weird percussion. It sounds almost cheery, almost poppy, but that weird backing vocal stops it being that. It has these Orange Juice guitar sounds, they’re all jangly. Yet at the same time it sounds like The Associates. It’s strange and wonderful.

This isn’t an easy listen. If you like your bands to sound vaguely the same with everything they play then this isn’t that. There is a feel, a way things are put together, that says ‘yes this is Drenge’, it’s not always obvious but it’s there. Having said that, proper, and repeated listening, is going to be rewarding. You’re going to grow to love the different things they throw at you.

Me? I’m really happy that I’ve actually heard their music, this is great stuff. ‘Strange Creatures’ is hugely compelling and intensely rewarding. I love this, I love this big time.