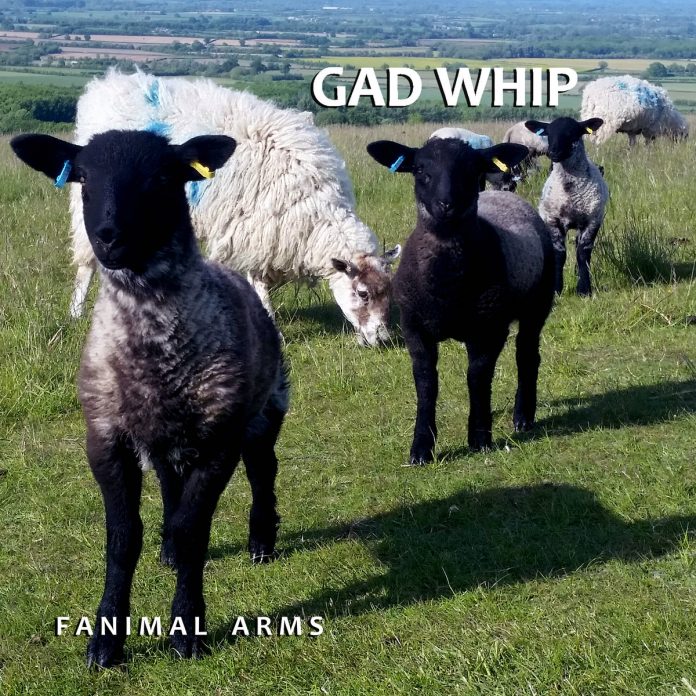 Gad Whip ‘are mainly from Lincolnshire, England’s second largest county with the big skies’. So why am I reviewing this, given that we focus on music from Yorkshire? Well my friends it’s basically because from the moment I pressed play on the preview stream I was hooked.

I was hooked because on the one hand this is a band who just do their own damn thing without giving a fuck for musical fashion, and I like a band that do this a lot. And on the other it’s this marvellous mix of music that I’ve loved, and love, put together in a fantastic way, with great, and sometimes weird or mysterious, words; sometimes semi-spoken words that in a strange way add to intensity of the music.

I am not going to be doing any sort of track-by-track review, it’s not that sort of album. It’s the sort of album you need to discover for yourself. Let it unfurl, wash over you, let it take you where it takes you.

Gad Whip might be loosely defined as a post-punk band. I say loosely because they add in elements of out-there dub-influenced space-rock in the style of one of my favourite bands ever – Here & Now, splashes of electronica, hints of acid, hip-hop, garage-y hard punk and sounds woven into a maelstrom of tumbling mesmerising sound.

In addition to reminding me of Here & Now, their sound kinda reminds me of present day King of the Slums. Although sometimes, and I have to be honest here, not at all. Look I’m trying my best to do some sort of FFO here.

It sounds like a band exploring their imaginations both musically and lyrically; but with, and this is key, a full bag of excellent musical tools at their disposal.

The other reason I love this album is that it’s so obviously a labour of love, each song is crafted, put together so well. And the playing is just ‘out of this world’ good.

And I adore that ‘just when you think you’ve got what the band do, they just go and do something that throws you completely’ feeling that I get listening to this album. This makes it into a journey, a surprising and wonderful journey. A journey where you sometimes feel bewildered, sometimes full of the joys of life, sometimes giggling at quite how good it is – it does that to me.

This isn’t an album for fans of bands that make music that has a consistent sound. Although there is a Gad Whip sound and feel, an approach if you will, that you’ll get. It is for those of you that are willing to listen with an open mind. I’m not saying this is hard music to listen to, on one level it’s easy to listen to; but there is a level beyond that, as you’ll discover, that demands closer listening and concentration. Once you do that you’ll find yourself down a rabbit-hole, in a maze that you don’t want to find a way out of.

I urge you to give this a go, once you’re in it’s a great place to be.

The album is available in a limited edition of 100 copies 12” black vinyl / full ‘kraft’ sleeve, 3mm spine, ‘tipped on’ front cover, individual collage & printed track listing on the back, with lyric insert from the band’s Bandcamp. As well as digitally

Gad Whip are mainly from Lincolnshire, England’s second largest county with the big skies. Since 2014 they self-released their first four cassette albums, with subsequent releases coming out on Ever/Never, Arachnidiscs, X-Mist and Fourth Dimension Records.

‘Fanimal Arms’ is the follow up to 2018’s ‘Post Internet Blues’ (on X-Mist), reviews of that album accused us of shitting on conventions, having an atmosphere akin to a night drive through zombie ravaged Lincolnshire, with the added bonus of getting a ‘God bless these weirdos” from yellowgreenred, that’s Matt’s from Pissed Jeans review blog.

It contains more bittersweet tales of going the wrong way down the one-way of life, looking at the world from a rest home for retired horses, ancient river crossings and abandoned museums. Blending avant-garde sensibilities with a contemporary take on the place where DIY culture meets post-punk, hints of deconstructed garage rock and interstellar voyaging through sweat-drenched waking dreams. Immediate, powerful, confounding and kept in place by wry, sometimes observational, semi-spoken vocals that recall Jason Williamson and the late Mark E. Smith, this is music primed perfect for any 21st century meltdown in a suburban sprawl.

Recorded and mixed at Yuba Studio