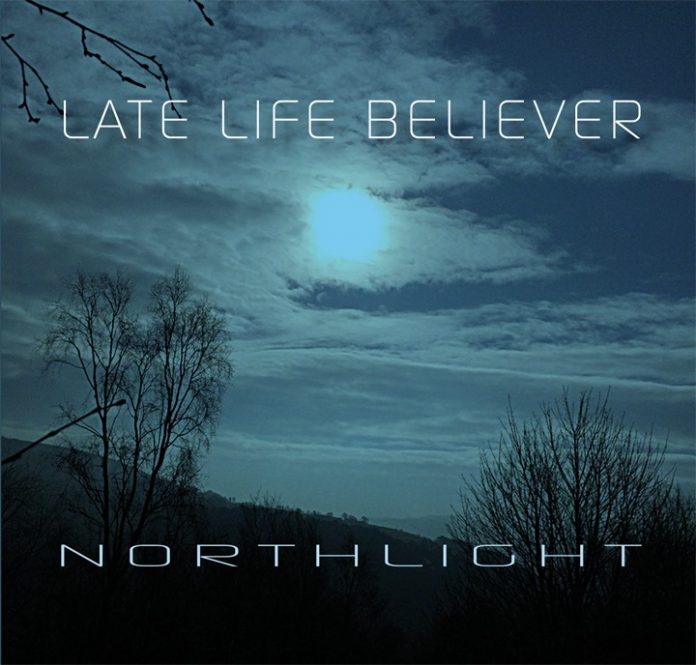 Northlight is a project put together by Martin McGroarty, a songwriter and musician who has many years of songwriting and performance behind him. Martin currently lives in the Calder Valley and the other singers and musicians on the album are friends from around there (There’s more about Martin and the people involved in this album below). The songs are a mixture of those written by Martin, co-writes and one cover of a Welsh song written by Catrin Gerallt who also co-wrote a couple of the other songs.

You’d expect somebody with Martin’s experience to produce, along with the musicians and singers collaborating on this, to make something that is musically great – and there’s some fantastic playing on this album, vocally impressive and really well produced and arranged. So I’ll start by saying it is, there’s no song on this that doesn’t impress. The songwriting – both the words and tunes (so to speak) – is equally as impressive. Style wise the songs range from jazzy R’n’B to folk.

There is, to be honest, something of a slightly retro feel to the music. This isn’t a criticism, it’s actually a compliment, it has that concentration on putting the song across – the words are important – as well as showcasing the players and singers. This reminds me of music from the late 60s and early 70s. However it isn’t completely retro, that’s a feel, there is something of a ‘brought up to date’ thing going on.

I’d not going to be doing a ‘track by track’, I’ll be picking out favourites. Album opener ‘In Too Deep’ is a jazzy Latin tinged thing with lovely vocals by Ruth Gardziel and a sax break to die for. I say ‘jazzy Latin tinged thing’ but there are parts of this which kinda remind me of Joni Mitchell. It drives along in a great way, and has a tune that stays with you.

‘Late Life Believer’ has something of a Tom Waits thing going on – more early Tom than later Tom – if I’m honest. It’s jazzy, kinda RnB-ish and the vocal – by Dave Rigg – is in that spoken bluesy way. The standout thing about this track is the flute. It has me in mind of an album my Dad had – oh do I wish I could remember who it was by – that I loved.

For ‘Share The Gold’ the feel shifts into 70s’ balled. It’s basically guitar, voice – Antonia Bycraft in this case – and oh so delicate drums. With a lovely restrained sax solo. ‘Rainstorm’ has me in mind of that classic folk-rock sound.

‘Cân Yr Haf’ (Summer Song) with vocals by Catrin Gerallt is a track that left me reeling – it’s just beautiful. Voice and guitar in perfect harmony.

This may not sound like the ‘sort of thing I love’ given my rather obviously liking for loud and difficult music but if you’ve been keeping up with my reviews (you have haven’t you?) you’ll know that I love a well written, played and sang song; and these are very definitely that.

The album can be previewed and purchased as downloads from CDBaby: https://store.cdbaby.com/cd/northlight1

Martin McGroarty in his own words

The sounds of Aretha Franklin in her gritty soul mode, Think, Chain of Fools, the heart rending melodies of Brian Wilson, In My Room, Don’t Worry Baby and the blitz attack of Cream grabbed the heart and soul of this fellow in his early adolescence and entranced him into the limitless joys of music in all its manifestations. The constant weekly output of the 60’s meant music was a daily topic of peer chat and argument but that wasn’t enough, it had to be an active engagement.

So the journey started with £30 to buy an old Ludwig drum kit of an old lush from the “Barracks” area of town. It certainly made an impression on the neighbours but it got him into school based groups like Creative Mind playing the oddest mixture of music from The Doors to The Hollies. The charismatic frontman was a goth (slept with an open coffin over his bed) decades before they they became part of youth culture. He prematurely entered another coffin via a drug overdose, an early casualty.

Drumming was looking like the route to go but world events interfered when having left his kit in a local pub while he buggered off to London to taste real freedom, he returned home to find pub and kit had become victims of the “Troubles”.

Ok so a transportable instrument was required and that had to be a guitar. Focusing on “wooden music, all the Bob Dylan, Leonard Cohen, Neil Young singalongs were learnt and played on the dope gets you through times of no money better than money gets you through times of no dope nights, which were many. That was all very well and good but things got a wee bit more exotic when he having now left school hit the open road and found himself in Aix en Provence busking and meeting international musicians, troubadours of the very same open road and the learning curve shot up to embrace John Lee Hooker, JB Lenoir, Bert Jansch and many more. This period included taking in a trip to fascist Spain, with the coal scuttle helmeted military/police and purchase of a quality bespoke Spanish guitar.

The learning curve bottomed for a while, actually far too long, on return to Blighty with the loss of said guitar while living in the barbiturate fuelled junkie world of early 70’s London bedsit land.

It took a period travelling in the US a number of years later to reignite the musical flame and on return armed with a quality axe, he began to start playing in bands, most better to forget about apart from the eccentric and ground breaking Suns of Arqa – https://www.sunsofarqa.co.uk/ – .

In the process of forming a “Western Swing “ band he met up with a singer and started such a band which then, sensibly, went on to do original soul/r’n’b/country flavoured songs. They, The Well Knit Frames (some of them were of that stature) were a star band in the Greater Manchester area with regular appearances at the legendary Band on The Wall.

Co writing with this singer led to what seemed like the perfect poker hand, a publishing contract, management contract and then ace of spades a massive 2 album recording deal with EMI (the uber label of the day) recording at A&M studios Los Angeles – Herb Alpert didn’t fritter his money in the stereotypical West Coast manner – and getting Glyn Johns as producer-http://glynjohns.com/, who had produced, mixed, engineered such as The Rolling Stones, Joe Cocker, Joan Armatrading and The Eagles. Add to that some fantastic musicians of the day – definitely one for the vinyl oldies here – such as Bill Payne and Richie Hayward from Little Feat, Steve Lukather from Toto, Michael Landau from Joni Mitchell Band and Mr Wide Eyed and Legless himself, Andy Fairweather Low. The albums were called “Blue Slipper and “The Weather Inside” –
https://en.wikipedia.org/wiki/Blue_Slipper
https://en.wikipedia.org/wiki/The_Weather_Inside

This two album extravaganza flattered to deceive as they say in the horse racing world and sales though good in Europe were not what was hoped for in UK. A transfer was in order so we went from Manchester City to mid table Wolves and another album was recorded with RCA produced by a lovely man called Bob Andrews off Brinsley Schwarz and The Rumour – This album was called “Companion Gal”
http://www.neworleanspiano.com/

You make your own luck in this business but sometimes you can be shortchanged and 2 weeks after the release of this album RCA were bought by BMG who immediately dropped all those acts that were not already top major sellers. Boohoo but you realise you are not in this business just to make money and and buy a pile in Surrey, its about the doing and the making so the intrepid duo went back to their roots, started playing the Art Centre and club circuit with a small band and made another album on their own label called “Notes on Desire” which is a less produced, jazzy r’n’b style album with a couple of original (!) covers, Anita O’Day’s “I Told I loved You Now Get Out” and Billie Holiday’s “I Want More”.

The band toured regularly until 1997 when your man decided to take a break from it all and focus on earning some steady crust for his brood. This also meant ending his association with the co writer of all those years.

Music making is a life long thing and therefore sometimes has to take a back seat to other more significant life events. For such reasons he found himself away from music writing and recording for some time.

However during these barren years he played with the odds and some of the sods of the valley such as the Might Inseminators and The Free Sandwiches. A more regular activity has been working with the 844s who write and play 90% original material in a dance bluesy r’n’b style.

But the time did come when the desire to write and record again finally started, initially, as occupational therapy, working with a couple of good friends who were actively writing and recording as Uncle Wally and Uncle Steve

This led to recording a couple of EPs and finally the album “Late Life Believer”. This has involved him meeting and working with many of singers and players in the small but perfectly formed small town and valley where he resides I.e. Hebden Bridge in the Calder Valley.

The album offers a range of music styles from jazzy r’n’b to folk. It is no way a concept album but reflects Northlights musical writing diversity and ability to work with various partners.

Singers and players on the album

Produced and Arranged by Martin