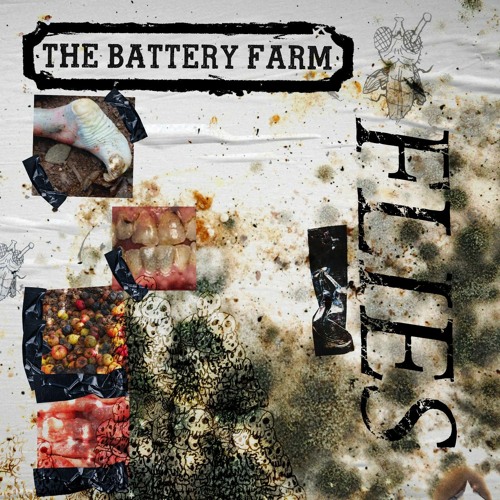 The Battery Farm are one of those bands who I always look forward to hearing their new stuff. So here we have a whole album of goodness, a whole album of ‘where are this band going next’ excitement.

I first want to say that this is a band who take their sound to places you don’t expect. They are capable of sweet beautiful songs and hard heavy sounds that batter you in submission. And they do all of this with an obvious musical ability. The sometimes DIY sound doesn’t hide the fact that they really know what they are doing.

The opening intro ‘FLIES’ builds from a low omminess buzz to a full on scream. Sonically it’s a wake-up call. Pay attention people this is a band on a mission.

The blast that is ‘A Working Class Lad’ hits you with a power that’s awesome. It’s punk, Gutter Punk; raw, guitar heavy. Its power is in the relentless riff that pounds you. What’s going to hit you straight away is that this is a band who can play.

And then, oh boy. do the band go another direction. ‘Crude Oil Water’ skitters with an almost frightening post-punk pulse. This is a track that twists and turns, it goes off at tangents; one moment bursting into a big ballad, the next bounding into frantic punk. The indication that this is no one trick pony, the indication that this is a band who do their own thing. ‘Wooden Spoon Number’ takes the sound of ‘Crude Oil Water’ and stretches it. That relentless pulse is there but there are also strangely disconcerting noises, a burst of screamingly fast thrash. Is this post-punk? Is it mutated No Wave? Who cares, it’s wonderful.

‘In The Belly Of The Beast’ is heavy; guitars roar, vocals on the edge of chaos. And yet, weirdly, strangely, scarily, there’s something else. An edge of art-rock. So surprising was this that I wondered if the streaming service had suddenly jumped to another artist.

After ‘((flies))’ a short spoken word piece comes ‘Everything Will Be OK’ a beautiful haunting ballad. Sweetly sung vocals, whispered words. But wait for everything will not be OK, as this song builds to a warped swell. If you were questioning whether this is a band who do their own thing, this is the confirmation. The words of this are moving, they seem to come from a very personal place. In a word, amazing.

As if to remind us that this is a gutter punk band ‘Poet Boy’ blasts in with a searing punky post-punk sound. Guitars cut through you like knives stabbing. It builds to a wondrous thrash. ‘DisdainGain’ takes that gutter punk sound into the hardcore. Pounding drums, guitars set to stun, weird stuttering sections, odd changes in tempo. A track to mosh to.

‘I Am A Man’ takes us into swirling pulsing roaring punk with that post-punk edge. Moments of respite serve only to allow us to recover our breath. It is an angry primal scream. It speaks of the state of maleness in our society.

One thing I have not mentioned during the review so far is the words. The words of the band’s songs are compelling. At times they appear more like poetry set to music than lyrics. Their songs are really worth listening to properly.

The words take me to another subject. There seems to be a theme that holds this album together. It seems to talk about societal decay with flies representing those that cause that, that feed from it, it talks about the personal effects of this. Because of this – and the fact that the album has an intro, a kind of intermission and outro – this is really something that you need to listen through from start to finish for the full effect.

The Battery Farm are a band that take the wandering musical path to their destination, a path with unexpected surprises around every corner. The songs on this album compel with great words, songs come with sounds that make you exclaim ‘what are they doing now’, sounds that wonderfully contradict their own description of their sound as gutter punk. This is fucking brilliant, listen to this now, right now.