The question which lurked in the back of my mind when I first heard this album was whether Two Spirit’s music is pop, folk, Americana or indeed alt world music. The thing is it’s any or all of these. So on this level it’s a head scratcher. On the other hand, it’s not; this is an album of incredibly endearing songs that charms you.

The aforementioned head scratching started with the first track ‘Brighter Than The Sun’. It sounds a bit like a Beatles’ ballad. Acoustic guitar, great incredibly catchy tune, lovely words. But in the middle of this track sits a viola solo in a Country style. And actually, and it took more than one listen to get this, the track carries that Country twang. Put simply I was charmed.

‘Dream Song’ carries the vibe from the opening track. But it’s more plaintive, it’s emotional. And crucially it has a koto (Japanese harp) on it, which I mistook at first as a banjo or mandolin, given that it sits in the Country musical slot those would occupy. But the tone of it adds this other worldly wistful sound that adds yet another level to the song.

There’s a kind of retro Country sound to ‘Got Me Under His Thumb’ which the first two tracks hinted at. The standout on this track, apart from the vocals which I’ll get to later, is the viola which provides a counter melody to the vocal. Given that by now that I’ve got used to their sound at this point it’s the song as a whole that I’m concentrating on;p and it’s sadly beautiful, the story of an unequal relationship. The words tell a story wonderfully.

With ‘You’re My Boy’ we go slightly more uptempo, that Mersey Beat ballad feel returns but the koto takes a central role which makes this song sound ‘different’, fantastically differently ‘Be My Muse’ swings people. And boy, that string solo. Lyrics with humour.

And then ‘Boy’ surprises me. Musically it has more than the hint of electronica turned acoustic, vocally it sits in an arch art-rock style, that is until there’s a rap break – provided by Leeds based Jodie (AKA Chubby Chubbsta). It’s pop people, but not as you know it.

‘Rockin’ In Ma Stockins’ kinda hits a sorta early Dylan talking vocal note. There are whoops, there are laugh out loud words. It’s a riot. ‘Don’t Need That Man’ is a kinda Country Blues stylee. The words, dear readers, the words are an utter joy.

And now album closer ‘How Long’, a slow Country Blues track. The emotional impact of this song! And bloody hell what is going on with that acoustic guitar, fabulous. It may be down beat but it’s no downer. Incredible.

This is a wonderful album, The songs are about life, love and the world through the eyes of Riana, there is humour, there is heart wrenching emotion. The band’s sound is kinda based in Country and Americana; except when it isn’t of course. And the playing and the vocals are compelling. These songs sound very personal, and you can’t but help hear the influence of Riana being a transgender woman. I didn’t mention this before because it’s not important, these are beautiful songs, although personal, with a meaning for you whoever you are.

Fantastically written and played songs, and that’s all we need isn’t it. This is charming, beautiful and emotional. 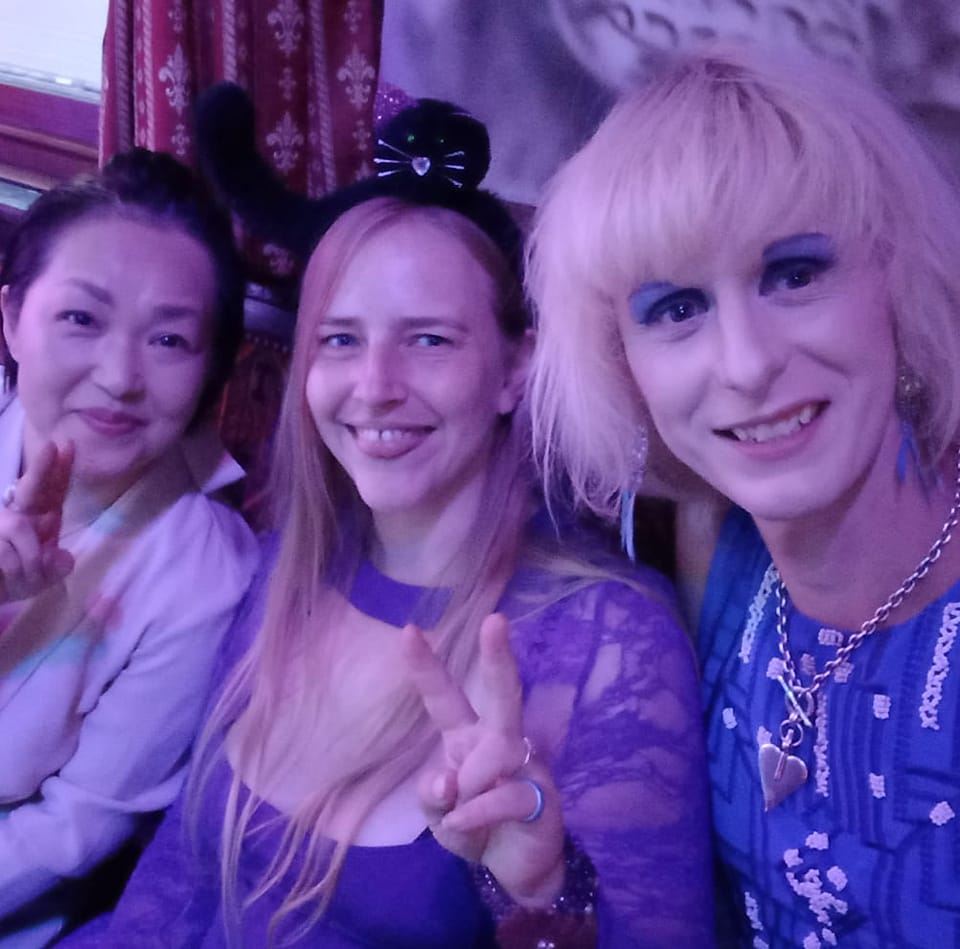 Two Spirit utilises two minority instruments, viola and (Japanese harp). They are fronted by local transgender female busker, Riana McGovern who wrote all the songs on the album.

They have also recently dropped a single ‘Cheeky Bums’