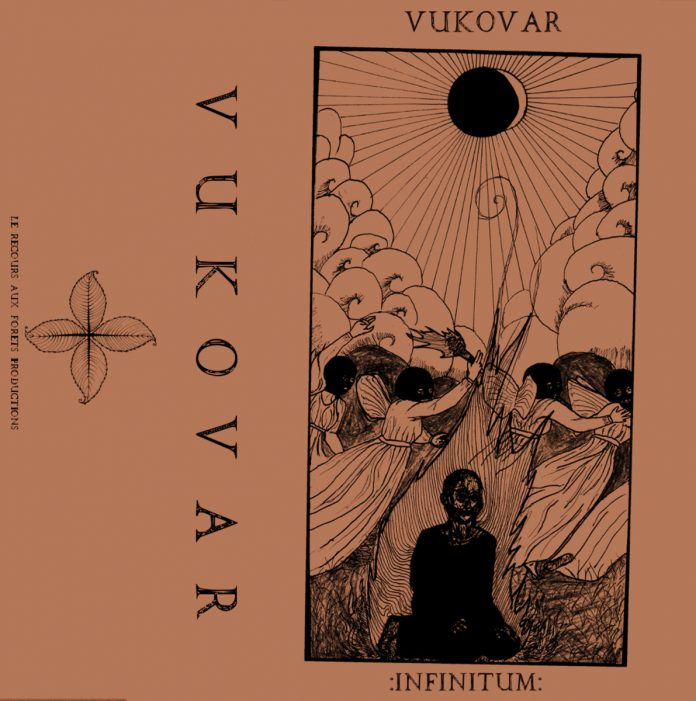 Usually a release from Vukovar is accompanied by some sort of text that hints at what has shaped the work on the release. In this case – and most intriguingly – ‘i n f i n i t u m’ is described as ‘an audacious alchemy between a kind of ethereal and aristocratic Synthwave, Military Pop and a ‘fasci-nating’ Post-Folk’. What this seems to indicate, at least to me, is that musically (or should that be sonically?) the tracks continue on from the last album ‘Puritan’. And indeed my first ‘scan listen’ seemed to confirm that.

The other thing is that that ‘scan listen’ left me frankly quite disturbed, I’m honestly not sure that for everyone this stuff is best listened to late at night when you are on your own and the house you are in is making those sort of end of day creaks and cracks. But, and it’s a big but, I really like music that leaves me feeling unsettled and disturbed, I’m like that. If you’re not like me then perhaps try listening when the sun’s out. However for me Vukovar’s music is best listened to in a darkened room with headphones on, or loud so that it wraps itself around you.

So for the purposes of this review I want you to imagine me late at night, typing only by the light coming from my laptop screen, listening to the album played loud (for this is indeed what I am doing).

The opening track ‘Rites’ starts with a pounding, a pounding that fades into something that sounds quite, and I’m not entirely the band would thank me for this, prog. It’s all keyboard ethereal washes. However then the ‘vocals’ – look it’s this spoken, indistinct words – come in and it becomes disturbingly gothic. It reminds me strangely of church music at points.

‘In The Overgarden’ reminds me faintly of early Human League, it’s sparse, a simple synth line, an uncomplicated rhythm track. A fragile sounding vocal. There are some spoken sections – your guess is as good as mine as to whether they are found sounds or performed by the band – although it matters not one jot to be honest which of these they are ultimately. As a whole this thing is hypnotic, it’s disturbing, there’s a sense of dread, a sense that something is happening or perhaps better put will happen.

Warped sounds open ‘The Skin Is New, The Skin Is Ours’, joined by a voice, and then a crash. There’s a warped synth, a spoken lyric. Look it’s at this point that I got scared, this track is scary. It gave me this strange disturbed feeling somewhere at the front and middle of my head. I was so disturbed by this that I really really wanted it to end. It actually became painful emotionally to listen to. But sticking with it is worth it, honestly. It’s worth sticking with for what comes afterwards.

‘An Invisible Prison’ is one of those things that makes me smile, because it’s just so strange. The opening synth is just so gloriously weird and warped that it filled me with joy. And there is just the most wonderful noise towards the end of this.

In some ways ‘The House Of Thirteen Scenes’ reminded me of some the tracks from ‘Puritan’ at least initially. But this is disturbing because it decays into something else, something filled with this sense of foreboding, a sense that the thirteen scenes are not going to be good. The synth becomes more and more decayed, stray random noises creep in. Random words stick in your head – ‘torture’, ‘bravery into sin’. The phrases ‘I will tear your mortal coil apart, I will tear your mortal coil in half’ repeat and repeat. There are random organ sounds, cracks, buzzes

Left feeling scared and desolate ‘Dead Pressed Flowers‘ feels like light relief. Although made up of things that may not sound like much – a bass line that almost hits a groove but jerks, a drum sound, a spoken vocal, synth noises. The whole is something else. It’s something that if you were so inclined you could dance to. It’s actually quite groovy in a disjointed jerky sort of way.

And so to ‘Small Acts Of Mercy’. Opening in a vaguely military sounding way, it becomes something quite disturbingly beautifully sweet sounding. It’s layers of simple synth lines, a spoken vocal, a sung vocal. A restrained drum pattern.

‘The Destroying Place’ has this most fantastic contrast between the music and the vocal. The vocal almost sounds quite poppy, the music is dark. My friend, and every music reviewer has to have a friend they can play stuff to, said it sounded like ‘a gothic New Order’. I know what they meant by that.

And so to the nine minutes of ‘Remains’. It starts with children’s voices, a drum sounding out. And then this organ-y sounding synth comes in, it’s all almost church music sounding with a hint of military. It builds, there is sung vocal buried in the middle of the mix, a spoken voice. It stops, a voice speaks, it starts again. Musical phrases repeat. It’s not a song as such but it isn’t a sound piece. It’s a piece of music, it’s almost classical in construction, it’s those repeating themes. It ends with this whirling synth sound. And as it ends you are left feeling sad it has ended. This piece creeps up on you, it latches into something in your head. It’s disturbing but in a good way.

As a whole, and I’d recommend that Vukovar albums need to be listened to as a whole, this is something that leaves me feeling several things – to some extent relieved that it’s over so disturbing are some of the tracks, sad that it’s over because there is a beauty in this ‘music’ that is hugely compelling, disturbed both by the music and the lyrics, and frankly quite scared about having to move away from my pool of light, and go to bed because it’s going to be bouncing around in my head, keeping me awake and giving me bad dreams if I manage to fall asleep.

There is one thing I need to say here. And this is that the ‘listening experience’ of this, and indeed the band’s other albums, is different when you hear it with other people around. Listened to with others you sink less far into the dark and the beauty of the ‘music’ is more to the fore. When I listened to the whole album in one go with my friend, nice glass of red wine to hand, it felt like an event. We didn’t speak until it had finished, and then we spoke quietly about our ‘favourite’ tracks, how it left us feeling. That isn’t what usually happens when we listen to music together, usually we talk over the music, play stuff on repeat, pause things to say ‘well that was great’ or ‘just listen closely to the next bit’, but this album somehow made us feel like we should listen to it in one hit. It’s that compelling and absorbing.

‘i n f i n i t u m’ is deeply darkly beautiful, that’s not to say that some of the sounds in the music are not jarring or ugly or frankly horrible, but it’s the way they are put together that is beautiful. There is a restraint here, things go just far enough to make a point, to drive a feeling into your head, but they never go too far. It’s disturbing and scary but in a good way, a way that makes you want to go back and experience it again. It isn’t, and this should be fairly obvious from my track by track review, an easy album to listen to. there’s no obvious ‘easy’ track that gives you an ‘in’, you just need to start from the beginning. It’s easier if you’ve listened to the previous two albums because you get the progression to this, but if this is your first experience of the band you just need to stick with it, really listen to it and let it take it where it takes you.

‘infinitum’ is released through Solar Asceticists Productions/Le Recours Aux Forets on two different cassette editions – the Vukovar Ultras ‘Totenpop’ Edition and an ‘Ordinary’ Edition – and in digital format, and is available from: