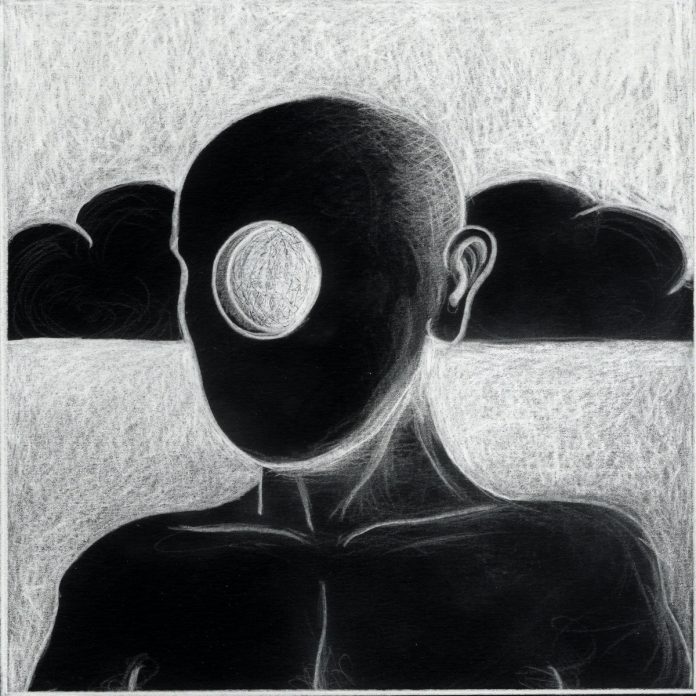 Vukovar, oh Vukovar, bless you for existing, bless you for subverting the very concept of music, bless you for not being afraid to scare, to twist the listener’s mind, for taking us on magickal journeys. And bless you for the sheer delight of what you make, craft, compose and play.

I am, if you’ve been keeping up, something of a fan of Vukovar – you understand I am understating my feelings about the band here, I am apt to get carried away and gush. It’s hard being a fan of the band; they’re not afraid to change, to move on, to leave what they’ve done behind. This leaves you wondering whether you are going to like their new material. Usually I do but there’s always that chance that I may not.

‘The Colossalist’ is the first album in what they describe as a ‘triptych’. The use of the word triptych is interesting because it’s more usually applied to the visual arts rather than music, but it’s appropriate because there is something visual in their music. It’s cinematic. It provokes visions.

They are describing the ‘new’ Vukovar as the NeuPopAct. And yes, there is somewhat of a pop feel – albeit not conventionally pop – to some of the music. It’s more accessible than some of their previous releases; you note I say more accessible and I say that in comparison to some of the material already released. This isn’t pop in the usually accepted style. But some of the tracks have tunes – great tunes – and vocals that are sweet as.

And while it may be the first of three, don’t for one moment assume that the next, and the next after that, will sound the same. Assumptions with Vukovar are just not a sensible thing.

On this album there are songs, or what broadly fall into the concept of songs, and there are things that are not songs. These could be described as soundpieces or musically based atmospheric pieces. This is what the band do, you should expect that..

The album opens with ‘There Must Be More To Heaven Than This’. Out of kilter, discordant piano over sounds of people. And then the sound of a fuzzed something – that may be a bass, it may be a guitar, it could be a keyboard; who knows or cares really – sparse but insistent drums. Voices from the depths, the piano reappears It’s hypnotic, compelling and mesmirising.

‘Here Are Lions’ is an electronica pop song. Think early Human League, think Heaven 17, think, even, OMD. Distinctly retro synths, the heavenly sound of female backing vocals. But, and it’s a big but, this isn’t retro, it’s just what Vukovar do, it’s their present sound. Look you can dance to this, I did.

This is followed by a short interlude, a sound piece – ‘The Higher Law’. And now for something different. ‘End of Life Delirium’ sounds like the bastard child of Nick Cave, Tom Waits and some sort of experimental post-punk electronica band. Words are spoken, words are half sang. Keyboards threaten, but never quite do, to fall into distortion. That piano reappears, closer to the edge. It is quite quite brilliant.

‘A Danse Macabre’ is a song and then not a song. A frankly scary keyboard sequence that leaves you on edge. The feel of a manic puppet dance. Deep deep sounds behind it. Vocals that have you straining to hear them. It is strangely beautiful, it may leave you feeling anxious, but there’s a beauty there.

‘Vukovar (The Double Cross)’ follows. Now I understand that this is the last track on side one of the album. This is important because Vukovar albums have structure, they put the albums together in a way that takes you on a journey. If you are streaming the album you’re just going to have to imagine that.

This is a song, a rich, many layered electronica song. A song that reminds me of Depeche Mode – that’s dark Depeche Mode, Heaven 17. And then it subverts that, it mutates into some sort of mutated psychedelic pop song – distorted organ. In all of it’s 5 ½ minutes it’s a joy.

The opening track to side two – ‘The Dark Backward And Abysm Of Time’ is another soundpiece, a layering of sounds. Sounds that pierce, sounds that oscillate. A voice that is full of something, it’s hard to say what but it’s not good.

It’s at this point that I am reminded of something that these soundpieces sometimes remind me of; and that is the spoken word pieces on ‘It Crawled into My Hand, Honest’ by The Fugs (released in 1968, and well worth a listen if you can get your hands on it). Not in sound, as Vukovar’s are electronica, but in feel. It’s the use of the voices as another layer of sound.

There are some luscious lead vocals in ‘Dark Envoy’ but this is subverted by a deeply dark and discordant musical backing, backing vocals that jar. It’s electronica pop, but warped, got at, electronica. And this takes it to another level, a different place. And as the track goes on the darked warped sounds take over. This is just wonderful.

‘In A Year of 13 Moons’ sounds, of all things, like an organ driven hypnotic psychedelic pop song, as does the title to be honest. A halting drum rhythm, sounds that sound like a cello. Eastern sounding. The piano makes a return. In the time I’ve been listening to the album this has become something of a favourite. One because it just isn’t what you expect to hear, and two because you can dance to it.

‘I’m Becoming Yourself’ is led by a piano on the edge of distortion, a mutated toy piano. Sounds sweep at you, across you. Sounds leap out at you. It continues that eatern sound but taken to another place, a swirling dream.

Closing out side two is ‘Hearing Voices’ (written by Galaxie 500 and rewritten by the band) is a song, or something like a song, you can treat it like a song. As the title might suggest there are voices, layers of voices talking over each other, while a frankly jaunty martial sounding keyboard and rhythm sound out. And as it progresses there are sung words. Words that are sung to a beautiful tune that isn’t quite all there.

And it builds and then it falls apart, and then builds again with more layers of sound added, it’s more insistent. But always in the background there’s a voice. And after 6 minutes 40 seconds it ends after fading out. This is a beautiful ending to an album.

But it’s also a kind of tribute to Simon Morris, the member of the band who died some time ago, for the spoken words featured in the track are his, taken from interviews and archive material. I may be reading too much into it but the song’s structure may reflect the feelings of the band, the way Simon’s death affected them – the broken sound, the way it builds and falls. The use of his voice reflects that, and this is something I can relate to, you may hear the voice of somebody important to you who has passed away.

Taken as a whole – and this is something I urge you to do, Vukovar albums are meant to be taken as a whole and in the order the band have put the tracks in – this is yet another incredibly impressive album. Yes, it’s a development of sounds, moods and feels that you can hear on previous releases. And I’d thought I’d miss the scariness, the audible disturbing darkness of previous albums but I don’t. It has a darkness but it’s subtle and hidden within the richness of the music. Some of the songs could be described as pop but Vukovar never do anything straight. They mutate, they warp..When they play it straight, like ‘Here Are Lions’, that’s a surprise, a great surprise.

What hasn’t changed is the way the band put their music together. It’s rich, it’s layered, there’s always something new every time you listen. The music takes unexpected directions; you think you’ve got what a track is doing and where it’s going but then it swerves off somewhere else. There are new things that you suddenly notice the more you listen to the album – like an influence of minimal music, the odd dose of psychedelic pop, a hint of soul in the vocals, something that reminds me of an album made by The Cocteau Twins and Harold Budd (‘The Moon and the Melodies’ released in 1986). Vukovar’s music does that to you, it’s a swirling mixture of sounds, of influences.

As I said right at the top this is an accessible album, it takes less of a commitment to listen to than their previous albums. It still has that ‘Vukovar’ approach – the warped and mutated sounds, the discordant and jarring sounds – but they are fitted into a music that is more obviously beautiful.

This for me is the album I can recommend as an entry point to the band to my friends who don’t get quite why I like the band so much. And, it points the way for their sound in future releases, (or may not, who knows); and it’s a great sound, a great feel. A sound that has a beauty of its own.

I can’t recommend this highly enough, just go bloody listen to it OK.

The album can purchased digitally or on limited edition CD (hurry now) from: https://vukovareeh.bandcamp.com/album/the-colossalist

“Following the death of one of Theirselves, various failures and ever deepening reliances, VUKOVAR have finally emerged once more. With the disintegration of the old group, a new, stable line up – the NeuPopAct – have collided and colluded to here present ‘THE COLOSSALIST’, their 8th LP and part one of the Eternity Ends Here triptych; the most ambitious thing attempted by the group and the most wrapped in turmoil.

“VUKOVAR have reunited with OTHER VOICES RECORDS, a label to match the group’s ambition, to bring out this first CD in a planned series of releases in collaboration with world renowned artist Andrzej Klimowski.

“VUKOVAR formed in a crumbling placefiller of a town in 2014. They were always dying and reorganized after cease to exist in 2019. Effete artists pretending to be northern hardcases pretending to be uniform fetishists in iconoclast drag. “Do not trust us; we are fragile stars.”

For Simon Morris; His Name Means First And Last.

All songs written and recorded by the 5/5 of Vukovar (except Hearing Voices written by Galaxie 500 and rewritten by Vukovar). Engineered and produced by The Brutalist House And The Ghosts In Their Machine. Mastered by Phil Reynolds.