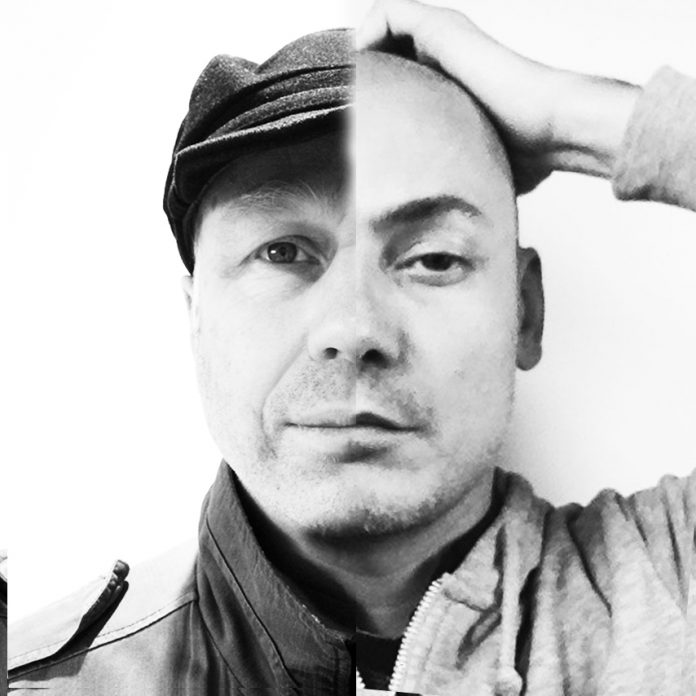 They make deliciously dark and moody retro but bang to date electronica – I know that’s a strange way of describing them, they use analog synths but the production is ‘of now’ if you get what I mean – that is influenced by those post-punk electronica bands, ‘original’ electro-pop bands, as well as more recent music. Their music is dark, has depth, and more importantly has heart and soul.

They’ve released four singles – ‘Darkest Lines’, Glass Rain’, ‘Held’ and ‘Wild & Wooly’ – with another ‘Make It Shiny’ due out soon.

I came to Scenius having reviewed Steve’s other musical outlet – the post-punk band Klammer – both releases and live. And I’ve fallen big-time for their ‘retro’ electronica influenced sound. Hearing that their album was out soon it seemed a good time to ‘talk’ (I say ‘talk’ because due to various things I was forced to do this by email) to the duo.

What did you both do musically before Scenius, or indeed at the same time as Scenius?

Steve: I’ve been in loads of different bands since I was 17, playing synths, guitar and bass. Currently I’m also in the guitar driven band Klammer. I’m also a producer/engineer, so I get to work with lots of different bands and musicians. I’ve learnt a lot from that, how to do things and sometimes how not to do things. I was lucky to be the engineer on The Cure’s Wish album and I definitely learnt a lot of great things from Robert on how to organise/run a band.

Fabrice: I started playing guitar and singing in a band around 16. We were getting rather bored in the small town where I’m from. So, when we read in magazines that some bands we were then getting into – mostly UK post-punk, French new-wave, Belgian EBM and US garage pop – had formed without taking any music lessons first we’ve thought “hey, cool, then we could do this too”. This band went on for about 10 years. We played noisy guitar pop in which we ended up adding samples and synths. After working for the labels that released our records, I also started my own label. Then, as studio tools were getting more affordable, I started to delve into recording, mixing and producing.

How did you two come together as Scenius?

Steve: I recorded Fabrice’s guitar band years ago and we got on really well and stayed in touch. He came over to England last year and popped into visit. He saw my studio and asked if I still used my old analog synths. When he got back to France he asked if I fancied trying to write some songs together using the old synths. Once we’d done the first one there was a burst of creativity and very quickly most of the album came together.

You live on opposite sides of The Channel – Steve lives in Leeds and Fabrice lives in France. How does putting together the songs work?

Steve: We both have studios at home and we’ve been sending files, emails and Face Timing to write, record and mix the songs. Fabrice and I haven’t been in the same country, never mind the same room through the writing and recording of the singles and album!

Fabrice: I more precisely live in Angers. In a way we’ve had a long tradition of putting things together with people beyond the Channel here since the Plantagenêt inherited the throne of England ☺ Just kidding of course. I keep saying that we’re really lucky to live in a time when technology makes all this possible. It would have definitely been much harder for Scenius to exist only 10 years ago.

There’s a certain darkness, and sometimes a bleakness, in Scenius songs, is this something you’re both attracted to?

Steve: Yeah I’ve always been attracted to darker sounds and songs, but at the same time I’ve always liked good pop music. So even if it’s bleak it still has to have a good melody. To get all muso about it, I think I’m very attracted to minor key melodies. I like those odd notes that almost sound wrong.

Fabrice: I wouldn’t say I’m attracted to music that’s dark for the sake of it and I definitely enjoy uplifting music too. When I heard Steve’s tracks for the first time I was simply touched by the soul they got. Which is what I need to feel to put vocals and write lyrics. It felt inspiring – and challenging too: you don’t want to ruin a great track with lame vocals ☺

While I hesitate to use the phrase – but I’m going to anyway – there is a retro electronica feel to Scenius’ music. This seems to be something that electro-pop in general is moving towards. Is this deliberate on your part or does it just reflect your influences?

Steve: From the start we did decide to use as much vintage synths and drum machines as possible and really limit the use of more modern equipment. But saying that it was all recorded and edited and then mixed using modern software (Pro Tools). We also play a fair bit live into the computer rather than using midi and then over quantising (tightening up) the notes. I think that’s helped keep a warmth and a bit of human feel to it. There were no preset sounds used either, each sound was hand crafted to the song.

Fabrice: So you’re definitely right about the retro approach but we also wanted to find our way to take this heritage forward. So we’re glad that that’s generally what people say about our music: they can hear where it comes from but they’re also enjoying that it’s got a modern and personal approach to it. What we also like in the great tunes of the late 70’s/early 80’s era is that they would always have an unexpected, twisted side to them. So that’s probably another thing that we’re trying to keep retro in a way. I tend to feel that today’s electro-pop is too often obviously aiming for mainstream success.

This is one for Steve. Klammer have covered some electronica classics – like ‘Being Boiled’ – albeit in what I describe as a Klammified way. Has this cross-influenced the distinct post-punk sounds in some of Scenius’ music?

Steve: When I first got into music I got into punk/post-punk and Kraftwek at the same time, so noisy guitar and synths have always been with me. Someone once said I play guitar like a synth player and that I play synth like a guitarist! So I guess those two influences are in both bands. As Klammer did a synth classic (Being Boiled) and only used guitars to make it their own, if Scenius ever did a cover I’m sure we’d pick a guitar song and only use synths. I like covers that are completely different from the originals

You’re releasing your first album – ‘Enough Fears’ – in early December. Was an album planned right from the start of Scenius?

Steve: No not really. We originally just wanted to work on a track or two just to see if we had anything, and then bang! We had almost a whole album’s worth of songs written very quickly last year. After 6 months of writing together we knew we were going to do an album

What can we expect from the album? Are there any surprises, things that are going to make us sit up and say ‘well I didn’t expect that’?

Steve: Mmm that’s a hard question Frank. We’ve just done what feels natural to us, so I’m really unsure whether there’s any surprises. I guess that’s for the reviewers and public to decide on that one. So far I’m really pleased that people have been saying that it’s influenced by early electronica but at the same time sounds like it’s contemporary for 2020.

There seems to be a theme to the songs – a certain foreboding, a sense of apprehension, as where we are as a world right now, and where we are going. Am I right, or am I just reading something into the songs that isn’t there?

Fabrice: I never start writing lyrics with a subject in mind. In fact, most of the time there’s bits of lyrics that come along as I’m trying to come up with a melody. I quite like that kind of automatic writing. When I write the final lyrics to the melody I try to preserve those bits and kind of build around them. But that doesn’t mean that there might not be an unconscious common theme somehow. In the end I’d say that anything you’re reading into the songs is there as long as you’re reading it. It’s just that not everybody will read exactly the same thing and that’s cool. 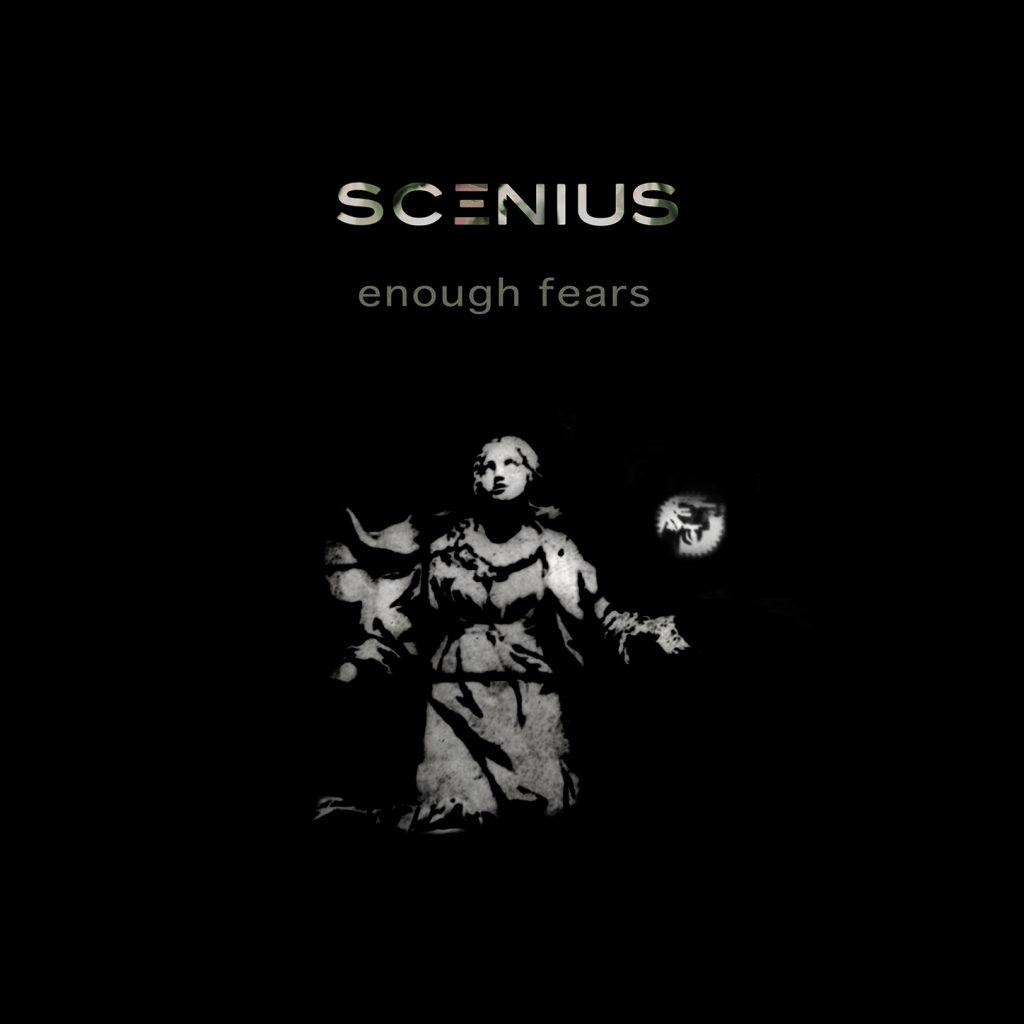 Scenius is currently a studio based project, is this something it’s going to stay as? Would you ever consider bringing it to the live stage?

Steve: We definitely want to go out and play live. We have already started work on the live set and I’ve bought some new synths to take out live, as I don’t want to take my old analogs out on the road (too precious and unreliable)! I’ve taken it all out to Klammer’s rehearsal room and blasted through the PA to check it’s going to work.

Fabrice: We’ve already got one serious gig offer, in France, which has made us have to think about that probably earlier than we’d have otherwise. Hopefully more opportunities will come in so it’ll make it worth putting money into shiny silver leather suits.

Steve: I think I’ve been pretty much influenced by everything I’ve listened to and worked on (the good and the bad). If I have to mention a few bands it would Bowie, The Beatles, Joy Division, Kraftwerk, The Cure, Orbital, Boards Of Canada, LCD Sound System and ……

Fabrice: Same for me. There’s lots of others of course that I’m never bored to listen to like Neil Young, The Clash, Leonard Cohen, Lou Reed, Serge Gainsbourg, but they’ve had a lesser influence, if any, on Scenius’ album apart from the inspiration they provide in general.

And finally, is there anything in the pipeline for after the album?

Steve: Well we already have the bones of 8 songs for the next album! So it’ll be full stream ahead to work on the 2nd album and get the live thing happening.