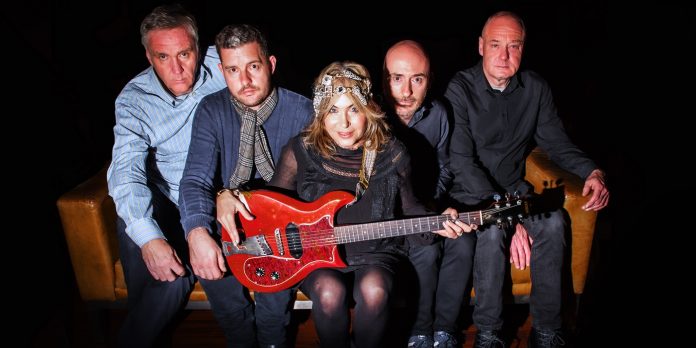 The band will release the highly anticipated album ‘Part 2’ on 22nd September 2017 on Blang Records. The band has – in the words of an old Fall lyric – something of a “track record”. Brix Smith-Start is one of the few true female rock icons of the indie and alternative era, an inspiration for generations of women, not just those who play music. Her best-selling 2016 autobiography, The Rise, The Fall And The Rise, detailed a hugely eventful life including the years in which she was married to Fall singer Mark E. Smith and wrote songs and played guitar in the group. Steve Hanley’s own acclaimed memoir, 2014’s The Big Week, revealed what is was really like to spend 18 years in the Fall, the longest spell of any member of the iconic and influential Salford group.

If Hanley’s elastic bass lines defined the Fall sound, Brix’s arrival in the 80s and two spells in the group redefined that sound and took it chartward (and brought a touch of LA glamour to the band’s Salford mean streets look). Together, with Steve’s brother Paul, guitarist Steve Trafford (both also Fall refugees) and Irish guitarist Jason Brown, they are now Brix & the Extricated, but while the Fall have given them a foundation, a history and a pedigree, this is a new group with new songs and a new sound, who are writing their own history now. Yes, in their terrific debut album, ‘Part 2’ (a title suggested by Alan McGee, because it’s exactly that) there are elements of vintage Fall, such as strange sonic textures and off-kilter found sounds, but Brix & the Extricated also bring the raw power of the Stooges, the pop sensibility of prime Blondie, walls of big glam rock guitars and dollops of psychedelia. “It’s not as polarizing as the Fall,” says Brix. “Yes, there are dark, hypnotic grooves, but there are rays of sunshine. I realized that a piece of my soul was missing, so I had to do this and I’ve given up everything to do it. I never thought I’d touch an instrument again, so to pick up a guitar and have it all come back racing through me because of the connection between us was a gift from God.”

As the best things often do, Brix & the Extricated came about almost by complete accident. Until three years ago, both Brix and Steve felt their musical careers were long since over. Steve’s memoir opened up opportunities in writing and public speaking. Brix had been so “broken” by the end of her Fall experience – never an easy band to be in, never mind being married to and then divorced from the singer – that she didn’t pick up a guitar for 15 years. “I felt my connection to creativity had been severed,” she explains. Thus, she went from being one of the true female icons of the UK alternative scene to a household name as presenter of TV’s Gok Wan’s Fashion Fix and helped run her husband Philip Start’s fashion empire. However, when Steve put together a makeshift band to play Fall songs for his book’s launch in July 2014, Brix was in the audience, and something happened. “Something went through my body like a lightning bolt and made me just want to get up and grab the guitar,” she says. “I hadn’t felt that fire for 25 years. Afterwards I went over to Steve and asked why he didn’t ask me to play and he said, ‘We never thought you’d do it.’”

In fact, Brix had been “secretly” playing again, admittedly only to her dogs Pixie and Gladys. On hearing this, Steve suggested, “Why don’t we get together and do something, write songs, just for fun?” This germ of an idea became something much more the moment they plugged in, initially jamming through Fall classic US 80s 90s (which, importantly they’d both been involved in writing). “I just had goosebumps,” says Brix. “I said, ‘Oh my God, there’s something there’.” Before they knew it, they were putting together a full-line up, which wasn’t easy. Brix wanted to feel how she felt in the peak Fall – “like standing in front of a freight train!” as she puts it), so the Extricated had to be a rhythmic and melodic powerhouse. Up stepped Steve’s drummer brother Paul, who played on no less than seven classic Fall albums. “Having the Hanley brothers as your rhythm section is amazing, because as brothers they play together intuitively,” grins Brix. Steve had got to know guitarist and songwriter Steve Trafford, who did such sterling work on 2005’s Fall Heads Roll, one of the greater later Fall albums. Irish guitarist Jason Brown had done such a good job with Brix’s guitar parts at the book launch gig that she realised he would be the perfect foil to allow her to concentrate on vocals.

However, the thought of playing classic songs long discarded from the live set by the Fall – never mind singing the lyrics once sung by her redoubtable ex-husband – was daunting. However, she acquired a mantra – “I always say, ‘Right guys, let’s scorch the earth and poison the wells. Because we’re gonna take no prisoners and no one’s gonna come after us’” and at the early gigs, fans were weeping. “They said, ‘We never thought we’d hear those songs played live again,’” says Brix of songs that they will only play if they were part of their creation. “We wanted to take things we were really proud of and bring them back… in some cases for me to do them the justice that wasn’t done before.”

On ‘Part 2’, an example of that process is the spellbinding, psychedelic pop treatment given to 1983’s Hotel Blodel or new, anthemic focus brought to Feeling Numb. However, Brix & the Extricated were always intended to be more than a vehicle to remodel Fall songs. Almost from the off, they started writing songs. Something To Lose was the first, boasting Brix’s killer opening couplet “Today I am clean, but tomorrow I will be filthy” and a tune reminiscent of classic Stooges. For Pneumatic Violet, Brix was surprised by the reappearance of some very long buried vitriol. “It’s a song about revenge, specifically someone who Single White Femaled me.” Valentino is about “the greatest lover I never had, love and sex and about sitting next to someone that you really fancy and your hair is standing and your whole body is throbbing. It’s that!” The exquisite Moonrise Kingdom is testament to the unheralded songwriting prowess of Steve Trafford, who felt that his song Midnight In Aspen hadn’t been properly treated by the Fall. “Steve Trafford said, ‘This is the best song I’ve ever written and I don’t want it to go to waste,’” explains Brix. Thus, under Steve’s instructions, Brix completely reworked the song with new lyrics and a melody and the result is one of Part 2’s strongest songs. A classic Hanley bassline propels the defiant Teflon. Album closer Hollywood – which forms a formidable closing segue with 1985 Fall song LA – was penned by none other than the younger Hanley, who clearly has much more in his locker than trademark powerhouse drum beats.

The two bands will always have a connection. Brix learned much about editing lyrics and using strange sounds from Mark E. Smith. Since writing The Big Midweek, Steve has realised that people acknowledge that he was far more than “some idiot that stood behind Mark Smith”. However, Brix & the Extricated are not in competition with the Fall. “We wish them well, but they are a completely different beast,” says Brix. “Coming back, I feel like we’re the underdogs. A woman in her fifties taking it on – there aren’t many of us – but in a cool way. Neither myself or Steve got the credit we deserved, but Steve is one of my five favourite bass players in the world. I can look back now and appreciate what we did, but this is…. Well, Part 2.” And that telling band name? “Steve suggested it,” smiles Brix. “Of course, Extricated is a 1990 Fall album but also we’re all extricated from the Fall. Extricate is another word for freedom. So we say to audiences every night, “Sheffield – or wherever – prepare to be Extricated!”