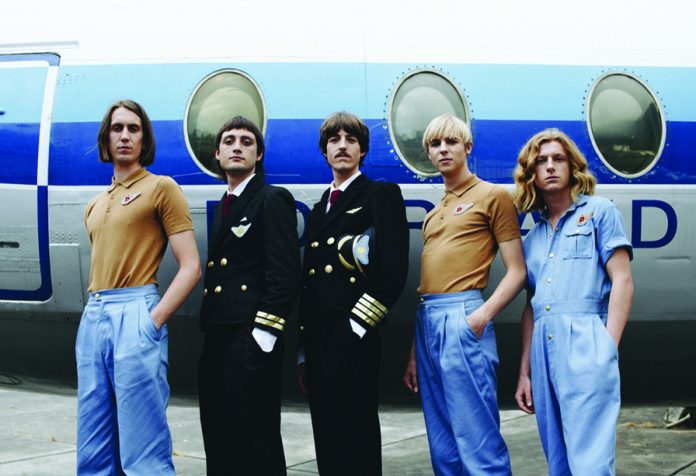 PARCELS have announced details of their self-titled, hotly-anticipated debut LP, which will be released on October 12th via Kitsuné / Because Music.

To celebrate the news, the Berlin-based Australian five-piece have revealed new song ‘Lightenup’ alongside a striking new video, which follows the sultry, disco-infused single ‘Tieduprightnow’ alongside “beach party jam” (Stereogum) recent track ‘Bemyself’. Having already surpassed 65 million streams, sold out sizeable venues worldwide (including London’s Koko, on top of touring with Phoenix), made their US TV debut on Conan and collaborated with Daft Punk (who co-wrote and produced “Overnight”), here is a band – as their arresting artwork and imagery reflects – well and truly on the ascent. Parcels headline London’s Roundhouse on November 11th as part of an extensive run of global shows heading into 2019. Order LP watch ‘Lightenup’

Immaculately self-produced and written by the band in Berlin, the twelve tracks of ‘Parcels’ are introduced further today by new single ‘Lightenup’. It takes, says the group, from “disco and funk and classic grooving music. And it was an important song to us because the lyrics come from the voice of the band. Usually the lyrics are personal. But these ones are really coming from the band. That’s the most representative of us.” The ‘Lightenup’ video, meanwhile, explores the seductive allure of power, and was inspired by iconography ranging from Helmut Newton to the Guy-Bourdin-shot sleeve to Bozz Scaggs’ ‘Middle Man’ album.

Ambitious, infectious, and marking the arrival of a genre-crossing new band, Parcels’ debut album is the brainchild of five young guys barely in their twenties, who nonetheless have appeared as if beamed from another planet. Louie Swain (synth), Patrick Hetherington (synth), Noah Hill (bass), Anatole Serret (drums) and Jules Crommelin (guitar) are schoolmates from Byron Bay. 3 years ago, they made the big leap of moving to Berlin, finding in one Europe’s most creative cities the prospects that equaled their ambition. Parcels’ early sound suitably reflects this ability to travel, and transform yourself: following an eclectic thread from The Beach Boys and Chic through to yacht rock heroes like Steely Dan, all the while blending elements of electronica, funk and tirelessly-drilled live musicianship into classic but contemporary pop. It’s in their Berlin exile – and its long history of creative breakthroughs – that the alchemy which makes Parcels so refreshing first crystallized. Theirs is a maniacal taste for perfection when it comes to production, composition and arrangement, with a live show so accomplished that Daft Punk offered to work with them on the spot (the first time the duo have chosen an emerging act to add to their list of collaborators, which also includes the likes of Kanye, The Weeknd and Pharrell).

It’s typical of Parcels, though, that these 12 musical doses of sunshine aren’t coming out in high summer: think of them as aural sunbeds to get you through the winter. Still, the cold isn’t so much of a worry for them these days. “These days,” Swain says, “we’re all in houses that have great insulation and heating.” And when the weather’s cold, they’ll bring the sunshine with them.