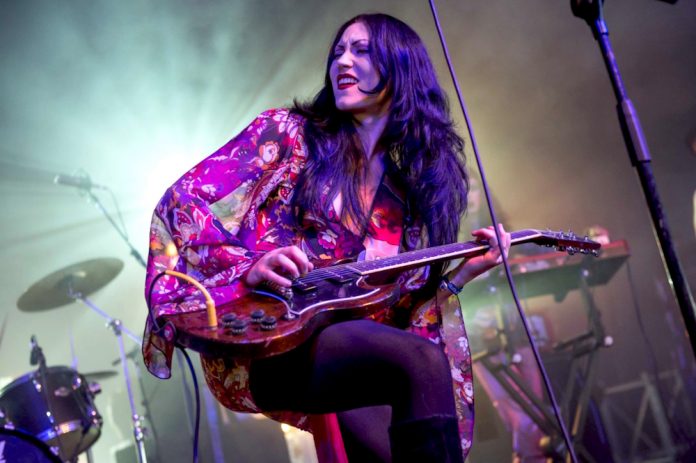 Ever since her critically acclaimed former band Purson played their final gig in late 2016, singer, songwriter and multi-instrumentalist ROSALIE CUNNINGHAM has been working on solo material for this, her debut album.

Across eight genre-spanning tracks, fans will be able to hear the incredible progression in both style and substance. With psychedelic roots still firmly in place, her music is still chock full of the drama and performance that typified her previous work, alongside an evolution in her song writing craft; this album shows off the growth as a writer in the past two years.

Songs like ‘Fuck Love’ and the epic closer ‘A Yarn From A Wheel’ have a theatrical element to them, and while the focus is still firmly rooted in ‘60s and ‘70s rock like Cream, Deep Purple and Jethro Tull, there is a psychedelic haze that ripples through songs like ‘Ride On My Bike’ and ‘Riddles and Games’ which are awash with fuzzy guitars and Wurlitzer organs.

There is an organic feel to Rosalie’s album, a testament to her ability to work with almost exclusively analogue equipment, giving songs like ‘House Of The Glass Red’ and ‘Nobody Hears’ a warmth and nostalgia, but with a clarity and maturity that marks it’s contemporary take on the classic. The album was recorded in three different studios, using mostly analogue equipment as Rosalie says: “The approach I started with was very modern, at a high-end digital studio. I soon realised it wasn’t for me and went right back to basics. I took it home, stripped it right down, experimenting with tape machine tricks, running mics down corridors and using radio broadcasting mics to get the guitar sound. After that I went to Gizzard, an analogue studio I’ve worked in before, for the final mix; all of which was done live. Being able to take time over arrangements without pressure meant that everything felt right, without being contrived.”

Once again in her burgeoning career Rosalie has proven she can thrive in multiple universes, accomplish any genre she chooses and grow as a musician and songwriter with every song she writes.

The self-titled album will be available on CD, 180g vinyl and via all streaming services. Rosalie’s headline tour travels across the UK from July.

1. Ride On My Bike
2. Fuck Love
3. House Of The Glass Red
4. Dethroning Of The Party Queen
5. Nobody Hears
6. Riddles And Games
7. Butterflies
8. A Yarn From The Wheel