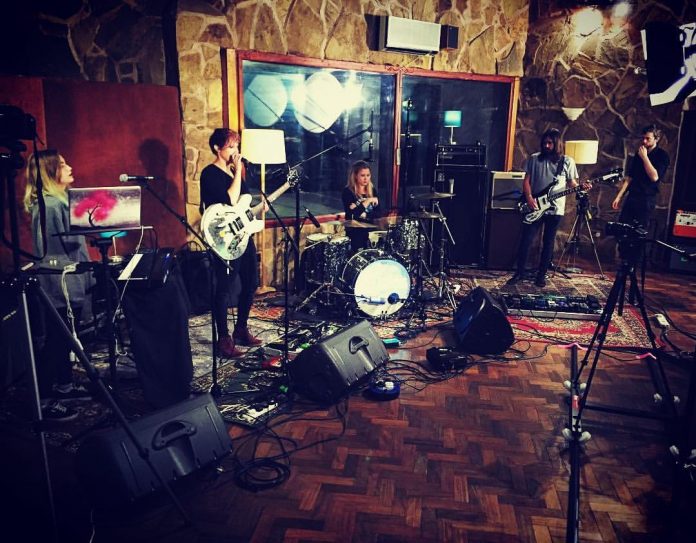 Released March 17 on Skeleton Key Records and produced by James Skelly (The Coral), ‘Memories Of Another Future’ contains the singles ‘Poem’, ‘Pit Pony’ and ‘Since You Were Not Mine’. A new version of the Liverpool quartet’s 2016 debut ‘Memories Of The Future’, the album features three brand new recordings – two original new songs, ‘Sing’ and ‘You’, plus new single ‘No Hole In My Head’, a cover of a 1960s protest song by US folk singer Malvina Reynolds.

“Malvina Reynolds is someone who’s really inspired me,” says She Drew The Gun’s singer-songwriter-guitarist Louisa Roach. “I love her music and her story. She only started her music career in her late forties, but wrote all these meaningful songs and became a legend of the folk song movement.”

Following the album’s release, She Drew The Gun will embark on their biggest headline UK tour to date. The tour includes London’s Oslo on March 24, their first headline show in the capital since selling out The Moth Club last October. Ahead of the UK tour, the band will make their debut appearance at SXSW Festival in Austin TX, where they play the BBC 6 Music Stage on March 16.

2016 was a breakthrough year for She Drew The Gun, who won Glastonbury’s Emerging Talent competition. Festival co-organiser Emily Eavis said “they stood out in the most brilliant way – spiked indie with biting lyrics. Intense and great.” She Drew The Gun’s subsequent appearance on the John Peel Stage drew the biggest morning crowd of the weekend.

Roach began by performing solo in 2013, gradually building the band around her. Her career began to take off after a mutual friend introduced her to James Skelly, who signed her to his Skeleton Key label in 2015. Working from the bare bones of her songs – poetic narrative lyrics set to haunting riffs and melodies – they built up the tracks, developing an electronic element into Roach’s sound. The result is a dark but dreamlike collection of stories which have seen She Drew The Gun win fans all over the country, including DJs at Beats1 (Zane Lowe), Radio 1 (Huw Stevens) along with Radio X and BBC 6 Music who have both playlisted their last three singles.

After spending last summer performing at festivals across the UK, She Drew The Gun were invited to perform at Zandari Festa in Seoul, South Korea, as part of the Liverpool Sound City Takeover, and finished the year on a high, supporting The Coral on their UK tour.