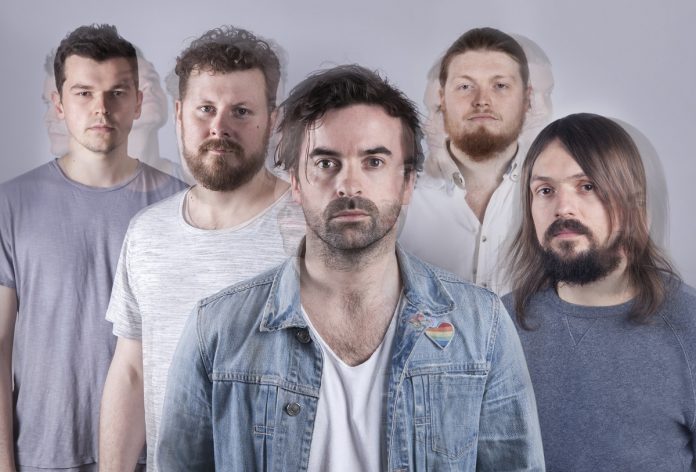 ‘Last Night (I Dreamt of Killing You)’ is the second single from The Travelling Band’s forthcoming album ‘Sails’. The song was inspired by a nightmare in which lead singer Jo Dudderidge murdered his girlfriend. The dark and nihilistic lyrics are set against the majestic guitar and keyboard riffs of a band in full flow, taking you spellbound on an irresistible journey through the shadowy depths of the lover’s dreaming mind.

On the inspiration behind the song, Jo says: “It was a real dream and it kind of messed my head up at the time. The song explores the darkness of love and the brittle nature of relationships and escapism. I’d revisited J D Salinger’s ‘The Catcher In the Rye’ and reflected on the protagonist Holden’s misguided adventures in New York as he searched for a deeper meaning in life. There’s a part of me that hasn’t really grown up and is constantly searching for something missing. I relate to his character in that way. I tried to weave that into the song as best I could. I’m not a killer though, I’m way too untidy to get away with it.”

‘Last Night (I Dreamt of Killing You)’ will be available on all digital platforms on the 28th July via Sideways Saloon/Kartel Music Group.

The Travelling Band play an exclusive album preview show at The Water Rats in London on Thursday 10th August, performing the new album in full for the first time in public. The evening will feature an opening set from label-mates Elle Mary & the Bad Men.

Focused around the songwriting talents and production skills of Jo Dudderidge and Adam Gorman and the rhythmic driving force of enigmatic drummer Nick Vaal, The Travelling Band have been quietly honing what Marc Riley described as “Mancunian Americana”. The resulting album mines a rich seam of influences, with key album track ‘Last Night I Dreamt (of Killing You)’ and the grungy ‘Wasted Eyes’ highlighting the band’s love of American indie rock, but still with that Mancunian twist. ‘Mopping Forwards’ draws on their time spent in East Nashville and the almost Satie-like melancholic ballad ‘Loser’ belies the darker turn that Jo and Adam’s lyrics have taken.

Beneath the surface of the rockier exterior and beautifully woven string and horn textures, the album’s unexpected darker lyrical themes and noir-esque approach reveal a band navigating stormy waters as personal and relationship issues began to emerge after ten years of hard-hitting life on the road. Two of the five remaining founding members jumped ship during the album’s turbulent recording process, and an album that was essentially recorded live ended up taking a further twelve months to complete.

Ironically, it was Spenny, one of the two departing members, who had driven the band to get back in to the studio after the event that Jo has dubbed “the Christmas miracle”. The band made national news when social media rallied round after all their gear was stolen along with their tour van: “what happened made us feel wanted and relevant to people’s lives. The band seemed bigger than just the members,” Jo says. When the van and all the gear was safely returned, Spenny floated the idea of getting straight into the studio to record a new album live, quickly.

However, despite the initial enthusiasm, the band started to fracture. As the recording process stalled, Jo travelled to Nashville and became inspired by the sense of community amongst artists and musicians in the city’s buzzing East Nashville suburbs. He returned to Manchester with renewed confidence and a desire to create a similar kind of supportive hub back in his home city:

“It seemed an obvious thing to me: if there’s a city in the world that has that collaborative spirit at its core, then it’s Manchester.”

It was out of this new-found optimism that Pinhole Sound Studio was born: Jo and Adam consolidated their instruments and recording equipment into a space which they have turned into a hub of creativity for the Manchester musical community.

“All the bands coming in to record at Pinhole Sound Studio gave us the impetus to finish our own record,” Jo continues. “The songs we had were the sails for the band – all we had to do was find the energy to breathe life in to them.”

The Travelling Band are a Manchester-based rock band. The core trio of Adam Gorman, Jo Dudderidge and Nick Vaal have been joined recently by Harry Fausing Smith (sax, violin, clarinet) and Sam Quinn (bass) after the departure of original members Mugger (guitar) and Spenny (bass). The line up is augmented by Chris Hillman (guitar and pedal steel) on their energetic live shows, which feature the dual lead vocals of Adam and Jo. The Travelling Band have released three critically lauded previous albums – Under the Pavement (2008), Screaming is Something (2011) and The Big Defreeze (2014) – they have performed at festivals such as Glastonbury (Other Stage/Park/Acoustic), Cropredy, Green Man, Festival No.6, Kendal Calling, End of the Road and Beautiful Days and spent much of 2016 touring Europe as Lissie’s backing band.

Sideways Saloon was set up by The Travelling Band for their first release, Under the Pavement, but is now spreading its wings, having released the solo debut from UK-based Canadian A. Dyjecinski, and with plans for further releases in the pipeline. This release also marks the start of a new label services and marketing relationship with Kartel Music Group.