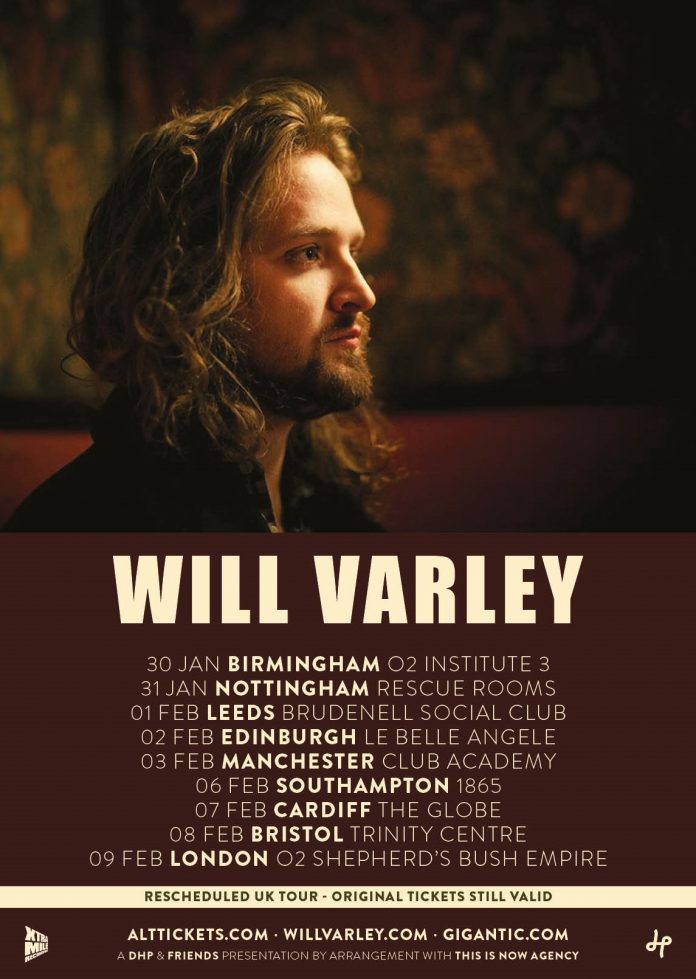 Having spent most of 2017 on the road, including dates with Frank Turner in the US and a European spring tour with Valerie June, Will will be heading back to the studio to record a new album later this year.

Unfortunately, this has meant rescheduling the planned November UK tour for January and February 2018. All tickets for the autumn shows will be valid for the new year shows, all taking place at their scheduled venues.

Will says: “After much deliberation, we have decided to move my November tour to January and February 2018. I’ve been offered the opportunity to work with a really incredible producer (and) hopefully this will mean I’ll have a new album for you all very soon.

“Unfortunately, this is the only way we could make the dates work and although all tickets will still be valid for the rescheduled shows, I’m really sorry for any inconvenience this still might cause any of you.

“I haven’t made this decision lightly, but I feel like it will be for the greater good as I want to make the best record I can. I can’t wait for you all to hear the new songs. See you all in 2018.”

The rescheduled dates are:

Will practically lives on the road, and 2017 has been perhaps even more busy than 2016, when he toured with the Proclaimers and supported Billy Bragg as well as performing on the Flogging Molly Salty Dog cruise. After starting this year on the road with Frank Turner in the US, Will embarked on a headline tour of his own in Germany before the European tour with Valerie June, including his first ever France dates. He also performed the Xtra Mile night of Frank Turner’s Lost Evenings festival at Camden’s legendary Roundhouse in May. He spent the rest of spring and the beginning of summer in the US supporting Lincoln Durham before hitting the festival circuit, wowing crowds at 2000trees, and Greenfield.

With so many shows under his belt, the wait until 2018 will be worth it, especially with brand new songs in tow.

Often politically charged and always emotionally loaded, Varley’s live shows have been drawing crowds across the world, and his headline tours have seen him selling out venues from Berlin to New York and everywhere in between. It’s been a meteoric rise for the 29-year-old who began self-releasing albums and travelling England on foot only six years ago. In 2015 he signed a deal with independent music champions Xtra Mile Recordings, and momentum has been growing around the young troubadour ever since with the release of two studio albums ‘Postcards From Ursa Minor (October 2015) and ‘Kingsdown Sundown’ (November 2016) and toured extensively across the UK, Europe and North America opening for supporter and label mate Frank Turner, Scottish heroes The Proclaimers and Billy Bragg.