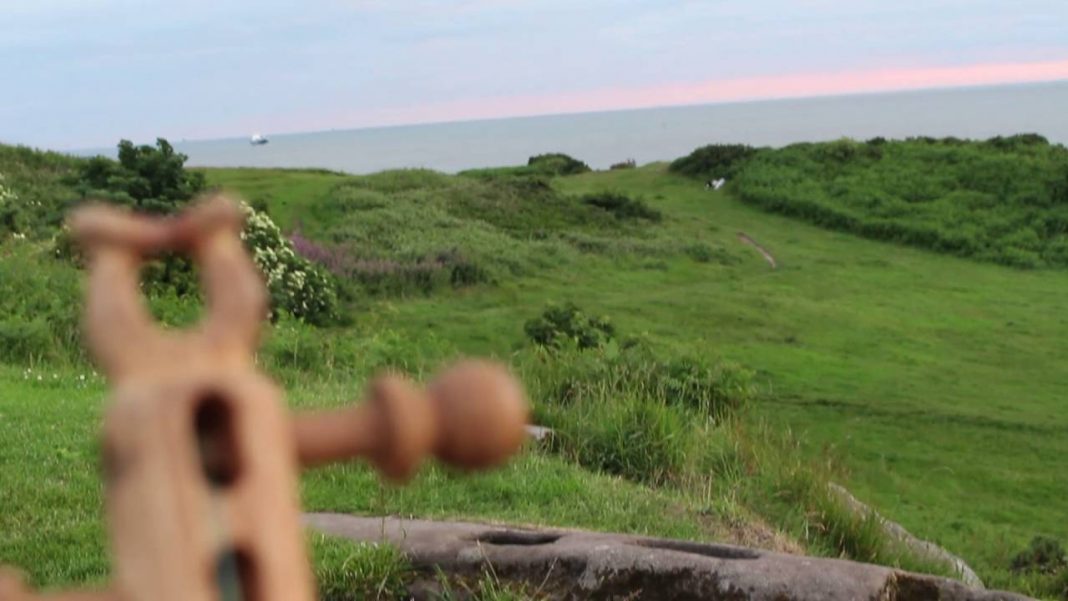 Having previously reviewed John’s album ‘Moorscape’ it was with some anticipation that I received this EP. John has already released two tracks from the EP ‘Dry The Life’ and ‘The Smile’. I reviewed ‘Dry The Life’ some time ago and I see no reason to change what I said:

If you’ve heard any of the album ‘Moorscape’ prepare yourself for something quite quite different. This is no folk-punk protest song.

Lyrically this is a beautiful subtle song that addresses this issue in what is very much a human centred way. So while the subject of the song may be political, the way it’s approached really helps you understand the issue from the point of view of somebody experiencing the problems caused by water shortage.

The music – which features an African instrument called an N’Goni – follows through in the subtle vibe set by the words. It’s beautifully simple.

The combination of the lyrics and music results in a song which I personally found to be very moving.

There two ‘bonus versions’ of the track on the EP. One played on the cittern rather than the n’goni and features some rather lovely backing vocals, and the other a HeyGamal remix. The ‘cittern version’ has a folky feel and the HeyGamal remix has this wonderfully trance-y feel. Listening to the three versions back to back was an interesting experience, you may think this was going to be a tad repetitive but they are all different enough to grab your attention. Clever thing that. And the song shines through, it’s just as moving whatever version you’re listening to.

So onto the other song John released from the EP ‘The Smile’. It would be fair to say that this is a more traditional folk song, at least musically. John told me that this ‘is a song of hope for people who suffer illnesses we can’t see, that they will one day enjoy better understanding, better health, and a better quality of life’ which is hardly your typical folk song subject. I really like the arrangement on this track – there’s really really great violin, some rather nice bluesy guitar moments and some fabulous backing vocals.

I’m going to come back to the second track on the EP ‘Night’ so I’m going to skip to ‘She Cries’ the third song. This is just lovely. It throws more musical elements into a single song than I’ve heard in a long time but they all hang together. It starts off sounding Spanish and turns into a slow bluesy thing. But there’s all sorts of stuff going on in the background of this track. Lyrically it’s simple – and by simple I mean there’s no more words than the song actually needs – but effective, it’s a sad story, well told, well sang and extremely well played.

‘The Sun Goes Round The Moon’ is a lyrically biting comment on religion and on believing what we are told to believe by the establishment – at least that’s what I think it’s about anyway. It all starts off rather ‘pleasantly’ in a musical sense – quiet vocals over some keyboards and backing vocals (with a touch of Led Zeppelin in the backing vocals) – but then all of sudden there is just this fuzz guitar coming in behind it. It works really well but it’s on the edge of not working – if you see what I mean. It sort of reminded me a bit of some of King Crimson’s later stuff – I say a bit because it’s just that fuzz guitar back in the mix that did that for me.

And so back to ‘Night’. For me this is by far the stand-out track of the EP. While at heart it’s a slow folk ballad there’s all sorts of stuff going on in the arrangement – layered vocals, keyboards swirling in the mix, tabla (at least I think that’s what it is), rain sound fx. I can only describe it – and I don’t think John’s going to thank me for this – as progressive folk. And don’t take this to mean that’s it’s self-indulgent and over-blown, it isn’t. There isn’t anything in the arrangement that is there for show.

No review of John’s material can go without mentioning the production, again handled by HeyGamal. It’s full of clever little touches, things that ensure that you’re always discovering new things in the tracks. I recommend listening to the tracks on headphones to really pick-up the nuances in the mix.

So can I recommend this EP, without a doubt I can. Forget the fact that John bills himself as a folk artist, yep there’s folk but there’s a whole lot more to his music than that. These are just great songs played really well.

The EP is out via Bandcamp on 1st January and can be pre-ordered now.