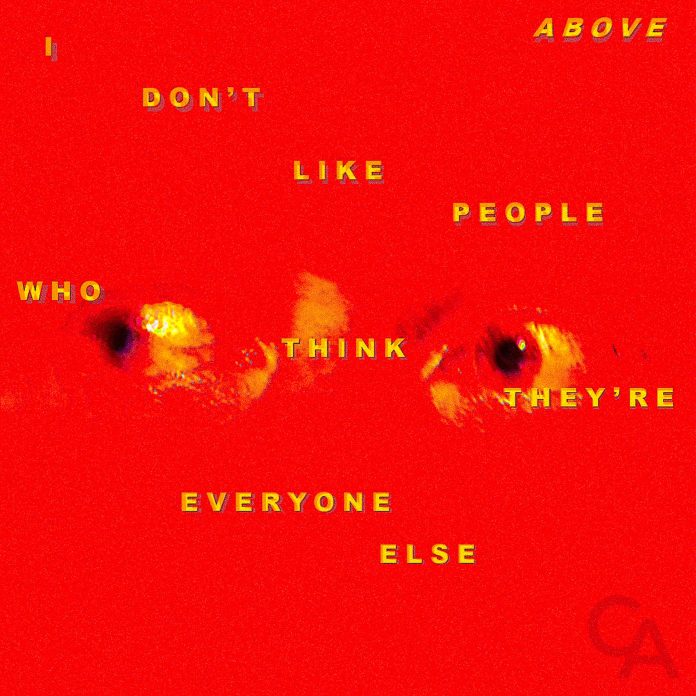 What I love about Concrete Armbands is that you never know what they’re going to do. They’re quite capable of doing a country-ish song or a big art-rock song, as well as making some of the heaviest music I’ve heard; although they’re capable of hiding that in a song that starts off sounding electro-pop. So each release is something of a journey of discovery. It also leads to people saying to me ‘Well Frank I liked that song a lot, but why in the hell can’t they sound like that all the time?’. My response is usually an argument starting with the fact that all bands have different influences, and if they want to express those, then that’s a good thing, and ending with the fact that Queen/The Doors/ Led Zeppelin/Bowie did all sorts of things (often on the same album), and they should ‘open their minds’. I don’t agree with the ‘bands should sound the same all the time’ thing. Equally, and for clarity, I feel that if bands chose to make music that is in the same style/genre then that’s fine as well.

Crucially across all of their songs there’s a feel, an approach, that marks them out as Concrete Armbands’ songs. And this is true of all good or great bands that do different styles or genres of music; you need some sort of anchor to go on the band’s musical journey with them.

A siren introduces you to the EP’s first track – ‘White Noise’, I say ‘introduces you’ but that should be ‘warns you’. This track is heavy. It has loud and – relatively – quiet sections – contrast is good. But the loud sections are loud, riffy, punk tinged, as heavy as metal. The vocals are equally as punky and metal-y. It’s a riot of sound. But there’s nuance in the sound – slashing sounds in the quieter sections, backing vocals to die for, surprising bits of keyboards. And if you can imagine heavy 70s’ Glam that’s what it sounds like at points, it even manages to sound like a way heavy Deep Purple at one point. And as it fades out into white noise you are left reeling.

So at this point I think I know where this EP is going, I’m wrong, so wrong. It is the classic Concrete Armbands’ bait and switch.

‘Baseball Bat’ is something else entirely. Yes, there are guitars but the sound is angular, machine funky. The vocals are something else My first thought was there was something of that angular post-punk funk sound of The Gang of Four, more than a hint of Heaven 17; at least until it takes off into madness, madness that builds, madness that takes over your brain.

That mad angular noisy sound continues with ‘Strawberries’. This time with something I’m going to describe as art-rock thrown into the mix. It swirls, it whirls. Bass throbs, vocal harmonies come at you unexpectedly. And then it stops, it stops leaving you wanting more, so much more.

The lead single from the EP – ‘Sertraline’ – is up next. I reviewed this when it came out. I’m standing by what I said.

‘I have a mixed feeling about songs about prescription drugs – one that oddly I don’t share about songs about ‘recreational drugs’ – in that once a drug gets to the stage where bands are writing songs about it, it’s reached some sort of ‘cult’ status which doesn’t reflect it’s actual usefulness as medication for certain conditions. In the case of Sertraline, this mixed feeling is intensified because I take it for my own mental health condition.

‘Concrete Armbands are in heavy mode on this track. It sounds like a mix-up of grunge and, oddly, math-rock. It either grinds out heavy guitar riffs, is bright and stabby, or does that strummed guitar to heaviness that grunge does. In one of my previous reviews I said that their song sounded a bit like a heavy Sparks, and that’s what this song does sometimes’.

The fact that I love this song musically however outweighs my uncertainty about the song’s topic.

‘I Don’t Like People Who Think They’re Above Everyone Else’ – the EP’s closer – might be trying to compete for a long title award (see below for some, let’s call it trivia). Sounds to me like some mad Sensational Alex Harvey band song – it’s that spoken intro, or possibly System Of A Down if they played art-rock. However you chose to describe it, it’s scarily good.

The theme that connects the songs on this EP is musical. They all have something of a heavy mutated, slightly punky, art-rock feel to them – in variable amounts. They all feel angular, and for that matter, angry.. And as I’ve come to expect from the band they are full of surprises, at times surprises that jar. But they are so good musically that that jarring is part of the song’s feel, it’s not a ‘throw something random in just to throw off the listener’ thing. It’s good to be jarred at times, surprise is good.

The playing is, and I’d expect nothing less from them, flawless. The musical mix-ups they do wouldn’t work if they weren’t. The sound is great, there isn’t one point where I’d say well that just isn’t right.

This is another great great collection of songs from Concrete Armbands. The songs throw you curveballs but because they have that ‘band feel’ I’ve come to expect, the change in style isn’t a shock. It’s just another step on a musical journey for a band who tread their own path. And long may they continue to do that. Go listen now, you won’t be disappointed.

10 words in the title – which is what ‘I Don’t Like People Who Think They’re Above Everyone Else’ has – is basically not trying hard enough. The following is a list of song titles that you’ll say ‘how in the hell did the cover art designer fit that on’:when you see them