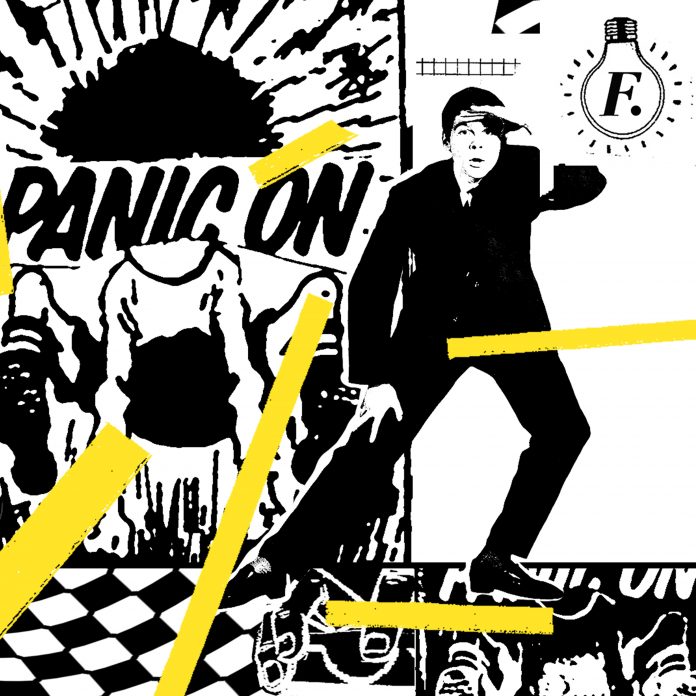 The debut EP from Fudge. collects together their three single releases plus bonuses in the shape of an Intro and a monologue.

Look you’re going to have to listen to the intro – I’m not even going to try and tell you what exactly it is.

So first up is ‘Hugger Mugger’, it’s the extended version so you get nearly 4½ minutes of riot inducing audio chaos. It’s kinda punky, kinda metal in places but most of all it’s something to lose your shit to, it’s a soundtrack to a wild night of completely inappropriate behaviour. If you want an idea of what Fudge. are like live, this, people, is it. And that delicate pulsing guitar intro gets me every time, I hear that and I start to get revved up. And then it just explodes.

This is followed by the ‘Monologue’ – Cam’s monologues are something of a live highlight for me, so the inclusion of one on the EP was something of a joy. And it serves as an intro to the next track.

And then the power of ‘Not A Threat, Just a Warning’. Repeated listens to this track both in its single form and live have not sapped this of the power it has to move me. It still leaves me ready to start a revolution, it still sounds dangerous. The thing is the band mean this song, it’s performed with utter conviction.

The final single on the EP is ‘Walrus’. Now I had something of an initial problem with ‘Walrus’ when I reviewed it when it was released, I just didn’t get what the band did. With the passing of time, and seeing Fudge. play several times, I get it big time now. It’s become something of a favourite. The thing I like about ‘Walrus’ is that it’s musically complex, it never stays the same – it has sections of pure guitar rock and sections of delicately played guitar and sweet vocals. It combines hip-hop, rock, alt-rock and punky sounds into something that is uniquely Fudge..

These three tracks show different sides of the band – the ‘lose your shit’ Fudge., the ‘songs that make you think’ Fudge., and the ‘musically complex’ Fudge.. They also show that Fudge. are both musically clever and can play really well. And they write and play songs that you can just lose it to, or actually sit and listen to them. The words to these songs are great – funny, thought-provoking, all that sort of thing.

Look I’m a fan of the band, so I’m not entirely objective. But I did try and listen to the songs as though I was hearing them for the first time, honest I did. Whether I succeeded entirely I don’t know but they stand up to me doing that, these songs are fucking fantastic.