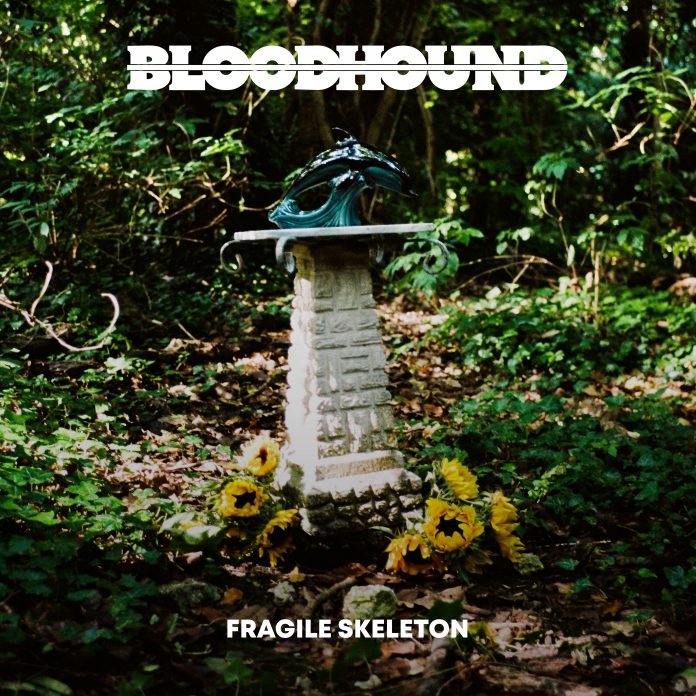 I first saw Bloodhound at Rifffest last year which they opened. I was hugely impressed, in fact my review of their set could be considered to be somewhat gushy. I had them marked out as a band to watch, and this album, and the singles released in the run up to its release, confirm my thoughts.

Incidentally at Rifffest I was in ‘my normal Lending Room reviewing position’ where there was a large group of Bloodhound family and friends. Should you be interested my normal Lending Room position is to the left of the stage as you look at it, right up by the steps up to the stage – if I’m there that’s where you’ll find me, look out for a long haired guy with glasses and either a large camera or a notepad if you’d like to come and say hi.

I’ve already mentioned the four singles from the album that the band released as teasers to the album. These have been incredibly impression, varied – having different feels and sounds – but having something that says ‘this is a Bloodhound song’. If you’ve listened to those, let me tell you that you’ll not be disappointed by the album.

Album opener ‘Everyone Is My Friend’ is a grungy thing. It sounds a bit like, and this isn’t a criticism, a heavy heavy False Advertising song. What I mean by this is that it has a tune, a really infectious tune. It has this lovely edge of poppiness, if you get what I mean. And it’s strangely danceable. And yes it a riff to die for. And this thing changes and changes, it never stays the same for too long, it twists and turns. It’s a blast.

Next up is ‘Again’ one of the teaser singles, you can read my full review but here’s the key stuff ‘This is loud, it’s doomy, it’s grunge-y, it’s riffy. It blasts its way into your ears with scant regard for their safety. There are surprisingly tuneful vocals – at least it was surprising to me, I didn’t quite expect them – and screamed vocals. And buried in there is a tune, honest there is, something that after repeated plays is earwormy. The track would be great if it did this for all of it’s nearly 3 minutes. But it doesn’t, it seamlessly turns into something that has a decidedly spacey and psychedelic thing going on before dropping out to something that’s almost just vocals before riffing out to the end. This turns it from something great to something that is fucking fantastic’. You get it, this one classy track.

‘Praise’ is another one of the teaser singles, again you can read the full review but here’s what I said ‘It’s a Bloodhound song, so you’d expect it to be loud, bloody loud, and it is. You’d expect it to have riffs to die for, and yep, it has that. You’d expect a hint of grunge in there, and again it has that. But what you might not expect is something with a sense of space-rock, and it has that. It’s also a dark moody atmospheric thing, and maybe you wouldn’t expect that either. And perhaps you wouldn’t expect, I did but previous experience has shown me this, vocals that are quite so fab. This song has a tune that drives itself into your head with all the finesse of a drill. It just sets out to embed itself in your head, and you’re barely halfway into the track and it’s there, sitting there ready to ambush you unexpectedly. It also has great words, words you should really take the time to listen to properly’.

The next track ‘Short’ features Ru Cowl from Faux Pas. It’s a ballady thing, it’s a slow song with a great tune. But it’s heavy, it has crunching guitars as well as periods of sweet sweet stuff, but this thing changes suddenly it gets all psychedelic, and then screamy and doomy before going back to being light and sweetly quiet and light. It’s a bit of an epic.

‘Cold’ is another track that features a guest, in this case Fiona Lee, the Yorkshire based singer/songwriter. The first time I played this I was so surprised by how it sounded that I had to check that I hadn’t accidentally wandered away from the preview stream. For this is a beautiful shimmering slow song. It’s melodic and lovely. The lyrics are fantastic. It has hints of psychy sounds but not in an ‘out there’ way just hints. For those of you that think of Bloodhound as a heavy riffing grunge-y band this is going to somewhat freak you out in a very good way.

After a short interlude – ‘Try’ – we are back with ‘Am I Okay?’, again one of the teaser releases. Again you can read the full review but here’s the key stuff ‘Musically, for those of you that expected some noisy hard riffing, it’s going to come as something of a surprise. This is a swirling whirling psychedelic thing. And yes there’s guitar driven riffage but there’s all sorts of psychy sounds going on under that. It has, to my ears at least, hints of Pink Floyd, there’s even some Strawberry Alarm Clock in there, and something that is bizarrely Alice Copper like – if you’ve heard ‘Welcome To My Nightmare’ you’ll know what I mean. Musically this song is absolutely fantastic’.

‘Worn Down’ is another one of the teaser releases, again you can read the full review, but here’s the summary ‘It starts in an almost Manchester Sound way, it has something of a Stone Roses vibe going on. But before long – about 1 minute in – it explodes into guitar driven noise, there’s a brief respite and then it’s riff heavy to the end. But it’s changing, it’s not the same riff, and those vocals well they are just fab. And those quieter bits just add to the power of the noise as it comes in, as it blasts into your ears with a power that threatens to rip them off. That initial explosion of sound is brutal, so brutal it takes your breath away’.

‘FRSTRTD’ features Brooders. You’d expect something that features a band like Brooders to be a heavy guitar fest and it is. But it’s also psychy and has periods of wonderful quietness before it builds back up. In its nearly 8 minutes (yep you read that right) it draws you into a world of swirling guitar. But there are lovely vocals that add more than a hint of beauty. And then suddenly it enters a period of something that I can only describe as full on psychedelic sound – droning sounds, blips, it’s a soundtrack to a light show.

Album closer ‘If This Is The Way It Is’ sounds something like – and I’m fairly sure the band won’t thank me for this – a Crosby, Stills and Nash song. It’s gentle, the vocals are great. There are shimmering cymbals. It floats you out of the album in a lovely way.

This is an incredibly impressive album. It’s varied in sound. The songwriting is brilliant. Musically you can’t fault it. The impact of the album played as the band have put it together is huge, it’s a journey musically and lyrically. And yes, there’s something that everyone could pull out as a favourite. This album is a must-have.

The band say of the album “The album is a journey through all of the material we have chopped and changed over the last three years. It’s more a story of personal experience and how a person can appear strong on the outside but, inside, they are fragile and afraid. It covers a lot of emotional experiences and delves into the delicate problems that so many people hide”.

‘Fragile Skeleton’ features contributions from Ru Cowl, the indomitable, driven vocalist with Faux Pas; Fiona Lee, the captivating singer songwriter whose work is grabbing attention far beyond her Yorkshire base; and Leeds psyche-grunge trio Brooders, whose singer and guitarist Adam Bairstow recorded and co-produced the album with Bloodhound themselves.