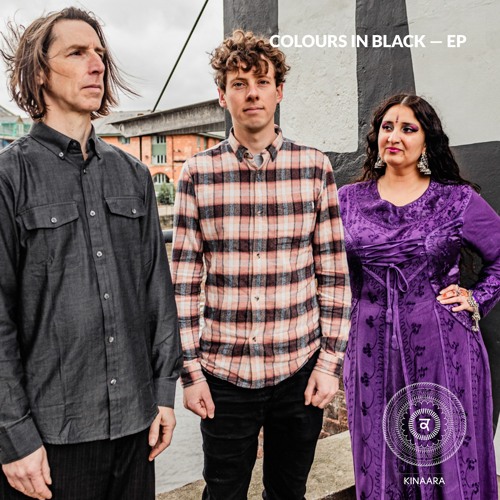 Kinaara are a band I find difficult to describe; I struggled to do this when I reviewed their debut EP – ‘Across The River’, and to be honest I still am. The band describe themselves as an indie/folk – both Punjabi and Western/rock/jazz cross genre band but this merely describes the ingredients of their sound. It’s kind of inadequate in giving anyone an idea of the feel of the songs or what the basis of their songs is.

EP opener ‘Kaalay Rang’ – the first of two Punjabi folk songs – is the story of a woman who has received a gift from her beloved – a black paranda (a hair extending ornament which is plaited into the hair). She dances and celebrates, but their love must be hidden from society. This is given a sound and feel that turn it into a desert blues song. Sparse repeating guitar figures. The extraordinary thing about this song is that the Punjabi vocals fit so damn well. Frankly incredible.

‘Baa-ja-ray’ is a well known Punjabi folk song – ‘I twist a cob of millet on my palm- that’s how I get my moody beloved to come back around.’ The playful indie influenced sound is a joy; clean lilting guitar and sparse percussion.

‘Black is the Colour’ is Introduced by the acoustic tanpura- the Indian drone instrument. This Celtic song comes with a dusky sultry latin blues feel. There are – for me at least hints of that Indian/Celtic mix of The Incredible String Band. It has a simple beauty that entrances.

Next up is ‘She Spoke With Her Eyes’ – ‘My eyes are saying that I want to stay with you, you are the jewel of my heart’. This is a love song from the 1968 film Jumma Janj Naal originally sung by Noor Jehan. The band have reworked this into something that has the musical feel of folk rock with something of a blues tinge but somehow retaining the sonic feel of what I’m going to assume is the original song. The strident guitar figures, vocals and ethereal backing vocals combine into something wonderfully mesmerising. This takes you on a beautiful journey.

‘Epiphyllum’ – a flower that only blooms at night and is often seen as a sign of good
things to come – is described by the band as ‘an instrumental inspired by and based on Raga Rageshree, the ‘queen of ragas’. Pentatonic in ascent, hexatonic in descent. It is a romantic raga to be played late in the night. Folky in its beginnings building to a pseudo Indian classical climax’.

And yes, it is that but so much more. The progressive folk start is a study in the gorgeousness of a simple sparse guitar sound. While the builds to the ‘pseudo Indian classical climaxes show off the musical skills of the band; combining the torrents of notes and the folky feel into something that astounds.

The final highlight in an EP of highlights is ‘Nature Boy’ a gently flowing ballad written by Eden Ahbez, who wrote songs for Nat King Cole, Eartha Kitt and Frankie Laine. Here the band combine folk, an Asian style vocal and touches of jazz into something so beautiful I was left speechless.

This is an amazing EP from a band who have obvious musical craft and skill. The way they take their influences and make of them something that is both separately of those and a new musical genre shows that. This would be enough to make this incredibly good on its own but the beauty and emotion that the songs have take it way beyond that. This is an outstanding EP.

Kinaara are a trio of vocal, electric guitar and drum kit from Leeds. They play Punjabi folk songs, and Celtic songs presented in Kinaara’s own distinctive arrangements. Begun in 2018 by singer Satnam Galsian with the aim of achieving an identity that reflected both her Punjabi heritage and her UK upbringing. She began working on arrangements of the songs of Surinder Kaur and Noor Jehan with guitar player John Hogg. Both musicians are schooled in Indian classical music but they realised that they wanted to keep an edge to the sound with an emphasis on electric guitar and drums. Jazz drummer Simon Henry completed the trio.