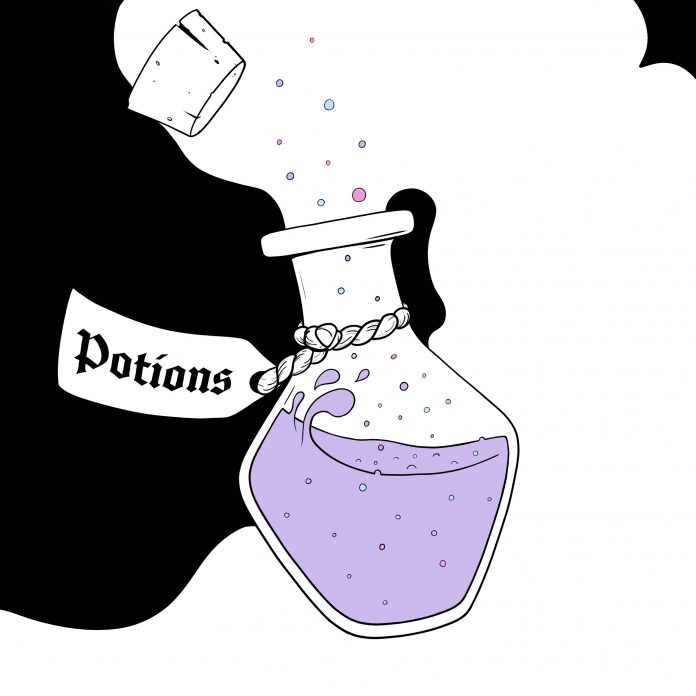 I’m slightly late in reviewing this, for which I can only apologise. New songs from VENUS GRRRLS are always exciting because they always bring something new to the party. If you’ve been keeping up you’ll know that they gave us more than a hint of this with the release of ‘Goth Girl’ and ‘Sudocream Queen’ which both dealt with very personal topics in an open and honest way. And you can expect that in the other songs on the EP.

GK explains ‘Writing this EP has been a product of a vast range of experiences which intertwined with the pandemic. We really were able to spend time focusing on the writing, even when remote, while the live industry was on hold. The lyrics are much more confrontational, we really haven’t held back on this one. Anyone that has listened to us in the past knows that we like to be as open as we can when it comes to our own experiences, in an attempt to share them with others in the hope they might provide comfort or solace. I think the difference with POTIONS is the exploration of body image and insecurity in ‘Sudocream Queen’, as well as ‘Glisten’ being our first love song. It feels incredibly intimate to be sharing, but ultimately we’re incredibly proud of the songs and feel that they really showcase who we want to become as people and as a band”.

It is because the band’s songs always have a message or story that I always wish I had song lyrics to hand, and it’s more the case with these songs. That said, let’s get into it.

It’s been a while since I listened to ‘Hate Me’, and boy is it as good as I thought when I reviewed it. You can go read the review for my longer take on the track but here’s some highlights.

With every release the band push the envelope of their sound changing it in small, or indeed big, ways that add fresh thrills.

You’d expect this to be a song about something, a message, a story, and it is. GK explains ‘The song can be construed in a multi-faceted manner, tackling once again similar issues that exist within our previous tracks such as Goth Girl and Deranged. An example of this being where women are continually judged for behaviours that their male counterparts are not judged for, and thus being looked at differently for no real logical reason. Correspondingly, Hate Me is delivered in a story-telling fashion that focuses on unsaid emotions between people, where there is a complete lack of communication about said feelings and happenings. It’s about the internal complexities this can cause, and explores the desire to have clarity and closure. It’s one of our more simplistic songs lyrically, but with the punchiness of the song we wanted there to be an uncomplicated and bold dialect alongside it’

I know the band surprise released ‘Sudocream Queen’ but this is actually the first time I’ve heard it. What we have musically is something along the same lines as ‘Hate Me’; that mix of pop and hard as hell noise. But this track pushes the pop upfront; their are some frankly exquisite pop sounds here.

Right up front is GK’s vocal – this track really shows off the range of her voice – from so sweet pop vocal to full on alt-rock, and of course everything in between. But listen closer; there is some banging synth going on here.

But above and beyond that, this song has a tune, a tune you can hum, a tune that worms its way into your head. And there’s more, for this track is a bouncy thing that just insists you throw yourself around.

‘Goth Girl’ is still as huge as I remember it, huger if anything coming after the previous two tracks. Again you can go read the long review which addresses the topic of the song in more detail but, as before, here’s some highlights.

What I’m going to say right here, and right now, is that this song bloody fucking rocks. It musically kicks arse, multiple arses. It has just the right amount of Goth sound in there to fit the song’s topic without going over the top. The playing is out there, way out there.

The song is a story, GK says ‘Goth Girl is most definitely a story, there is a running order to it. It begins painting a picture of two friends hanging out, who eventually realise their struggles for their choice of clothes and makeup’. GK goes on ‘t I quickly began to think about the strange and unique stereotypes people associate with alt/goth people. There are still struggles and strange interpretations of counter-culture, e.g. Witches/Goths ‘hexing’ people, but currently Goth has come more into fashion than it used to be, which is fine. Albeit, I imagine it to be difficult for those who were treated unfairly in the past to accept this, just because something was less socially acceptable at the time’.

Banger, nope this thing is one huge fireworks show.

And finally the surprise of ‘Glisten’. Musically it goes from haunting ethereal pop beauty building slowly, oh so slowly, to the release of the noise. The kicker is the return to the ethereal before it explodes in life. That musical form suits the topic – love – so well. The lyrics are open and honest, full of emotion and incredibly moving.

Look I think I need to say nothing more than this song is beautiful – musically, lyrically. It’s a song you need to experience, not read what I think of it.

VENUS GRRRLS continue to grow and innovate with every release, and if you want or need proof, ‘Potions’ is that. Their songwriting has changed; that injection of personal experiences has made the songs more hard hitting, more thought provoking, more real, more compelling. And I, for one, love that.. Musically the songs show that the band are stretching themselves becoming more inventive, adding layers of subtlety to their already wonderful sound. VENUS GRRRLS are getting better and better with every release.