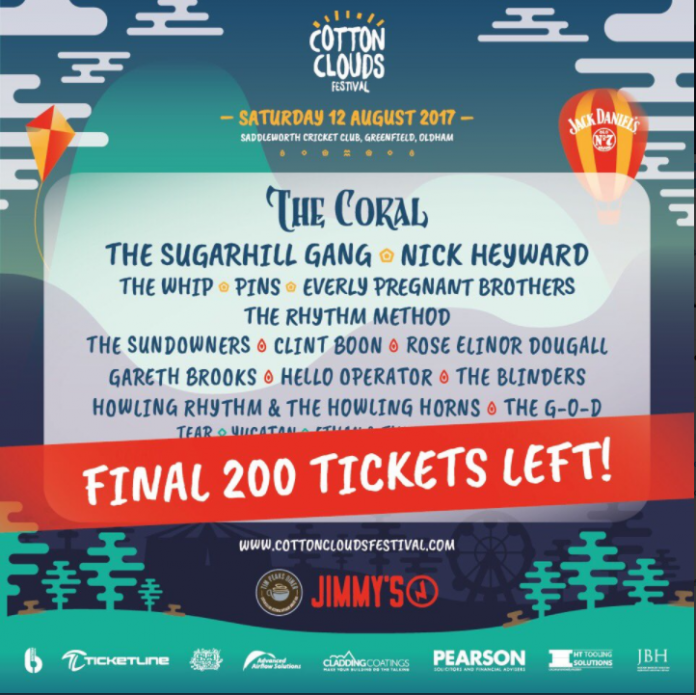 Due to overwhelming demand, less than 200 tickets now remain for the inaugural Cotton Clouds Festival – the all new one day festival set amidst the vales and hills of the stunning Peak District National Park.

Conjured up from the blue-sky thinking of organisers and local lads Max & Rick Lees along with fellow entrepreneur Luke Stanley, the Cotton Clouds trio invite you to join them for a day of idyllic escapism and top-flight entertainment.

“Make no mistake, this is dance music. It’s designed for the dancefloor – its electronic but with our own take on it. It’s a seriously big sound and we can’t wait to play it live to an audience.”

Specially selected street food stalls, pop up bars and a real ale tent will be augmenting your experience, serving all manner of tantalising tastes and delectable drinks sure to cater to your every fancy…

Did someone say drinks? We’ll have you covered with our fully stocked bar & the addition of a special Prosecco bar courtesy of Prosecco At Tiffany’s!

Tim Peaks Diner has proved a real festival favourite over the past 6 years. We are honoured to welcome Tim Burgess’ legendary diner to the very first Cotton Clouds Festival. From damn fine coffee to mind-blowing secret sets. You never know who you might bump into!

We’re also looking forward to being joined by Grandpa Greene’s Luxury Ice Cream – it doesn’t get much better than sunshine, music and ice-cream! And for those conscientious consumers ISpice will be bringing their delicious fresh vegan street food to Cotton Clouds!

EVERY CLOUD HAS A SILVER LINING: SUPPORTED CHARITIES

Committed to creating a festival “we can all be proud of”, our Cotton Clouds organisers have pledged to donate funds to the Manchester Arena Bombing appeal, as well as the British Tinnitus Association, in memory of Greenfield based Craig Gill, former drummer with the Inspiral Carpets.

Having initially played festivals the world over as members of thunderous rock & roll outfit Twisted Wheel, Rick & Max Lees have instead opted to put their guitars back in the rack to take up greater roles in helping to establish Cotton Clouds Festival.

Offering something for all the family, there’ll also be loads to keep the kids occupied at Cotton Clouds Festival 2017. Whether you get stuck in with our sensational “sand art”, go for a fantastical new look at our face painting tent or make your own special memento for the first ever festival at our brilliant badge making classes, there’ll be plenty on hand for all ages to enjoy.

Elsewhere on site, there’s a whirl of home-spun talent from the Northwest to be found with some dancefloor domination compliments of THE WHIP, eclectic and esoteric ukulele escapades with the EVERLY PREGNANT BROTHERS, plus full throttle rulebook-ripping outings from rockers THE BLINDERS, plus many, many more across three stages (see full line up below).

Tickets are priced at £39.00 + BF and are available on the Cotton Clouds Website:
http://www.cottoncloudsfestival.com/