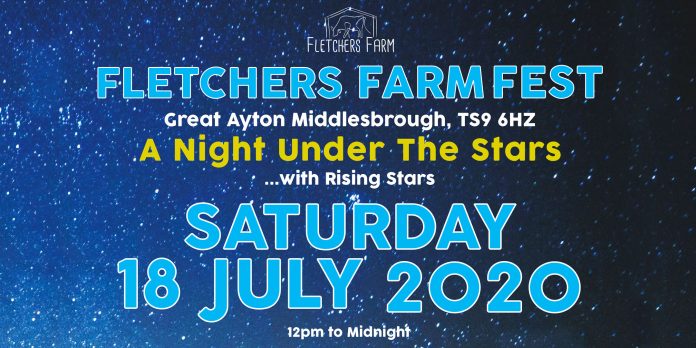 25 of the best musical acts spread over two stages from the UK, Ireland and the USA will rock the Fletchers Farm site for 12 hours from Mid-day on Saturday July 18th.

It promises to be a day of musical entertainment not to be missed.

Headlined by Irish, US based, Celtic -Americana all sister four piece The Screaming Orphans, a genre-breaking, chart topping all sister band from Ireland, who are known worldwide for their award-winning sound, combining their original pop songs with a unique take on traditional Irish music. The band have toured globally and recorded with the likes of Sinead O’Connor, Peter Gabriel, The Chieftains, Joni Mitchell and World music star Baaba Maal. Screaming Orphans have released 14 albums and have topped Billboard, iTunes Pop and World Music charts.

Opening the main stage will be local good time band Ed Parrish and The Councillors, followed by BBC Tees Introducing supported band Be Quiet. Shout Loud! One of Teesside’s brightest new bands, SWEARS will bring their brand of alt rock to the main stage before London duo Ooberfuse bring you their unique and chilled out Electronica to the farm setting.

Must watch indie bands complete the afternoon with appearances by La Dharma and London bands Butterfly and Officer.

The fest have announced a special guest performance from the beautiful Elaine Palmer to lead us into the late afternoon. A celebrated songwriter and performer, Elaine has shared stages with an impressive roll-call of artists – toured with KT Tunstall, David Gray, Paolo Nutini, Damien Rice, Donovan and Joanne Newsome over the years as well as playing shows of her own around the world. She’s also picked up a string of accolades from the media for her three studio albums, with Mojo Magazine, Maverick and Uncut Magazine all delivering rave reviews and the iconic Bob Harris declaring himself a fan with airplay on his BBC Radio 2 show.

Teesside lads, and UK festival favourites, The Balcony promise a special end to the daytime entertainment on the main stage before Shaun Kelly and The Returned Gifts raise the heat once more ahead of the night times entertainment. Wonder Stuff / Levellers Dan Donnelly graces the main stage with his unique brand of Celtic Rock before Fargo Railroad Company take you to the deep south of the US with their set of southern rock originals. Newcastle’s finest The Jet Reds mix a set of their best originals with some indie anthems to get the crowd well and truly warmed up for the headline act The Screaming Orphans. An all-girl Irish four piece based on the West Coast of the US, who are the ultimate feel good band with a host of TV and festival appearances racked up over an illustrious career.

It promises to be a spectacular end to a night under the summer stars.

The acoustic stage based under the café at Fletchers Farm is packed full of the finest acoustic talent from the UK and Ireland.

BBC Introducing supported Scott & Maria and Laura Victoria promise to bring some guaranteed quality to the stage. One of Liverpool’s top Americana songwriters John Jenkins heads to the stage with his three piece acoustic band and nu-Bluesman Ben Hemming heads north from London and is a must see live act. Tracey Browne is a unique songwriter from the north west and country blues man Benjamin W Pike promises to deliver a gravel soaked live set. Two of Ireland’s finest musician’s RTE Radio 1 acts Padraig Jack and Steo Wall #both of whom promise to raise the café roof!

Headlining will be local musician Joe Ramsey  who promises to pack the acoustic stage with his burgeoning reputation.

Numerous local food stalls and bars will make up the food village and on-site camping is available as well as free parking.

No Dogs Allowed (Only assistance dogs)