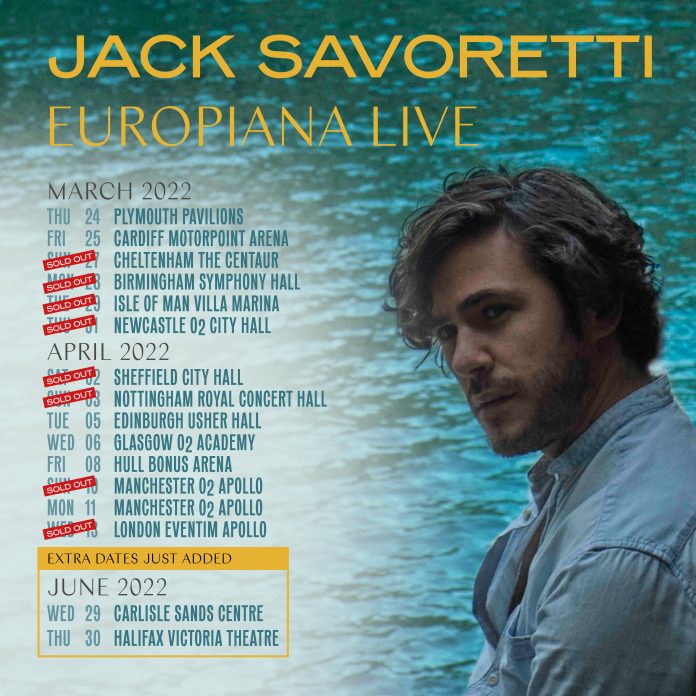 Poet turned acclaimed acoustic singer-songwriter Jack Savoretti has extended his hotly anticipated tour and will be performing at The Victoria Theatre, Halifax on Thursday 30 June. This news coincides with the announcement of the release of Europiana Encore, a special extended edition of his critically acclaimed, 2021 chart topping album, Europiana. The album will be released on May 20th on EMI.

A special extended edition of Jack’s acclaimed album, Europiana Encore, features six brand-new tracks including new single ‘You Don’t Have To Say You Love Me/ Io Che Non Vivo Senza Te (Medley)’; synth driven, heartfelt banger ‘Dancing Through The Rain’; the dance floor swagger of ‘Late Night’; and the funk filled ‘Why Not’. “The same way you don’t want the night to end, I don’t want this Europiana journey to end. More than a repack, Europiana Encore is the sequel,” Jack said of the album.

Tickets for this extra date go on general sale on Friday 18 February at 10am and Jack has partnered with War Child & PLUS1 so that a portion of proceeds goes to support children and families in communities affected by war throughout the world.

Tickets for this show are available from £40.45. Purchase tickets online, www.victoriatheatre.co.uk, or by calling the Box Office on 01422 351158