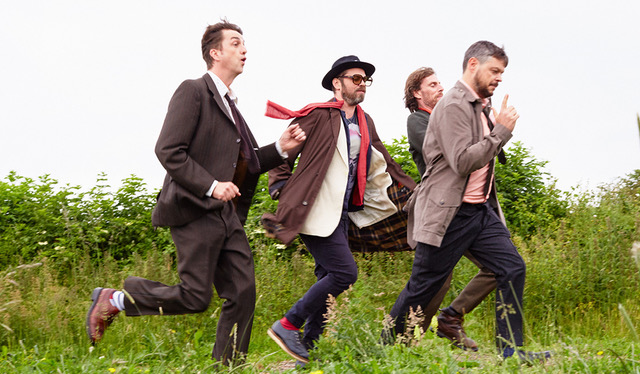 On Saturday 16 May 2020, everything’s guaranteed to be ‘Alright’ as the 90s trailblazers bring their stereo-pumping shenanigans to Doncaster Racecourse for an unmissable open-air fixture.

Promising a day-out like no other, this unique event will allow audiences to enjoy an entire day of racing at one of the UK’s most prestigious arenas, with the added bonus of a full set by Supergrass late into the evening.

Bursting out of Oxford’s hotbed of musical talent to become overnight household names of the thriving British music scene, it was clear from the moment go that Supergrass were destined for greatness. Releasing their debut single ‘Caught By The Fuzz’ in 1995, the band instantly scored a Single Of The Week in flagship titles NME and Melody Maker; but this was just the tip of the iceberg.

One of the most popular and enduring bands to emerge in the last 25 years, Supergrass (AKA Gaz Coombes, Mick Quinn and Danny Goffey, along with longterm collaborator Rob Coombes who officially joined the lineup in 2002), would go on to score an unbroken run of five Top 10 albums (six, if you include a greatest hits), among them three platinum sellers generating millions of worldwide sales spawning ten Top 20 singles. With a sound that oozed its own unique personality — a frantic explosion of energy, humour, hooks, and sonic references to everyone from The Beatles to Roxy Music; Supergrass were an instant smash with press and public alike, and always one step ahead of their peers too.

Earning a Mercury-nominated debut album ‘I Should Coco’ (which hit the charts at Number 3, before rising to Number One in the week following Glastonbury and alone ended up shifting over 500,000 copies in the UK and a million worldwide), the band would also go on to win awards at the prestigious Brits and Ivor Novellos. In the thirteen years between their first album and their last they were chased down the street by fans in Japan, scored the biggest-selling debut for Parlophone since The Beatles, were helicoptered into Glastonbury, turned down a Calvin Klein pants ad, toured the world on their own and supported everyone from Blur and Arctic Monkeys to Foo Fighters, Radiohead and The Cure.

But like all roller coaster rides, they must come to an end sooner or later. Releasing their sixth and last studio album ‘Diamond Hoo Ha’ in 2008, Supergrass toured the record, before announcing they would be parting ways with a short farewell tour in 2010.

It would not be until a full decade later, that the news of Supergrass’s surprise reunion would be on everyone’s lips; and not a moment too soon either. In 2020, the band are now preparing for some of the biggest shows of their career to date, including an unmissable 17,000+ capacity fixture at Doncaster Racecourse this Spring. With their back catalogue sounding as fresh, compelling and essential today as it ever did, expect a true Proustian rush as songs like ‘Alright’, ‘Mansize Rooster’, ‘Richard III’, ‘Sun Hits The Sky’, ‘Pumping On Your Stereo’, & ‘Moving’ fizz, thrill, and tickle your senses once more in their first outing in over 10 years.

Whether you’re a music fan, a racing fan or both, it’s horses for courses – ‘Live After Racing’ is a unique event with something for everyone.