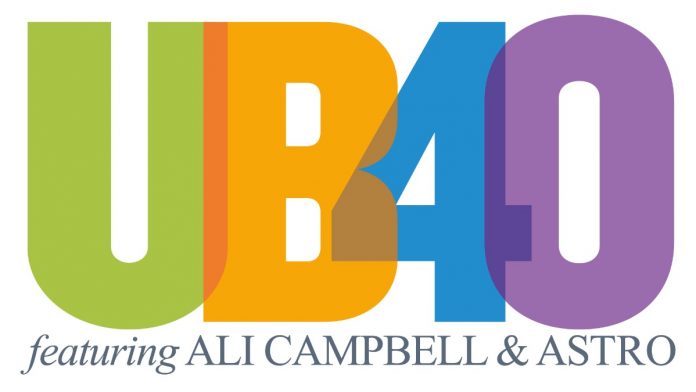 The Jockey Club Live and Aintree Racecourse are pleased to announce that UB40 Featuring Ali & Astro complete the line-up for Aintree’s summer season, headlining an open-air concert on Friday 14th June alongside previously announced Madness on Friday 17th May 2019.

You can expect to hear your favourite UB40 tracks including ‘Red Red Wine’, ‘(I Can’t Help) Falling In Love With You’ and ‘Kingston Town’ alongside hits from their fresh take on reggae classics from album ‘A Real Labour Of Love’, which entered the UK charts at No.2 when it was released this time last year.

As founding members of Britain’s biggest reggae band UB40, singer Ali Campbell and second vocalist Astro topped the UK singles chart on three occasions and sold 70 million records as they took their smooth, yet rootsy, musical blend to all corners of the globe. Since the band’s inception 40 years ago, they have been nominated for multiple awards including both a Grammy and BRIT, and are one of the most commercially successful reggae acts of all time.

With a firmly 80s influenced line up for 2019, UB40 and fellow headliner Madness jointly hold the record for most weeks spent by a group in the UK singles chart during the decade, with an astounding 214 each.

The Jockey Club Liveare leading promoters on the UK live scene, delivering spectacular line-ups of some of the hottest chart talent and legendary household names to some of the world’s most famous racecourses. The Jockey Club Liveconcerts at Aintree Racecourse are turning into a staple in the region’s social calendar and over the past few years have hosted thousands of fans of live music, with performances from artists including Craig David, Lightning Seeds, Jess Glynne and Kaiser Chiefs.

The events are renowned for combining a fun filled evening at the races with a spectacular evening concert in the informal and relaxed open-air setting of the hallowed turf.

The Jockey Club racecourses have world-class customer facilities, featuring an array of award-winning restaurants that cater for all tastes, be it Fine Dining through to delicious bistro food. The Jockey Club venues welcome over 2 million people a year for some of the UKs biggest racing events so you can be sure of a fantastic evening.

Tickets will be on sale at 8am on Wednesday 13th March via thejockeyclublive.co.uk, with a presale available to customers at 8am on Tuesday 12th March. Tickets are priced starting at £35 for adults and £15 for under 18’s. All T&C’s are available on aintree.thejockeyclub.co.uk. There will be hospitality packages available to suit all budgets.