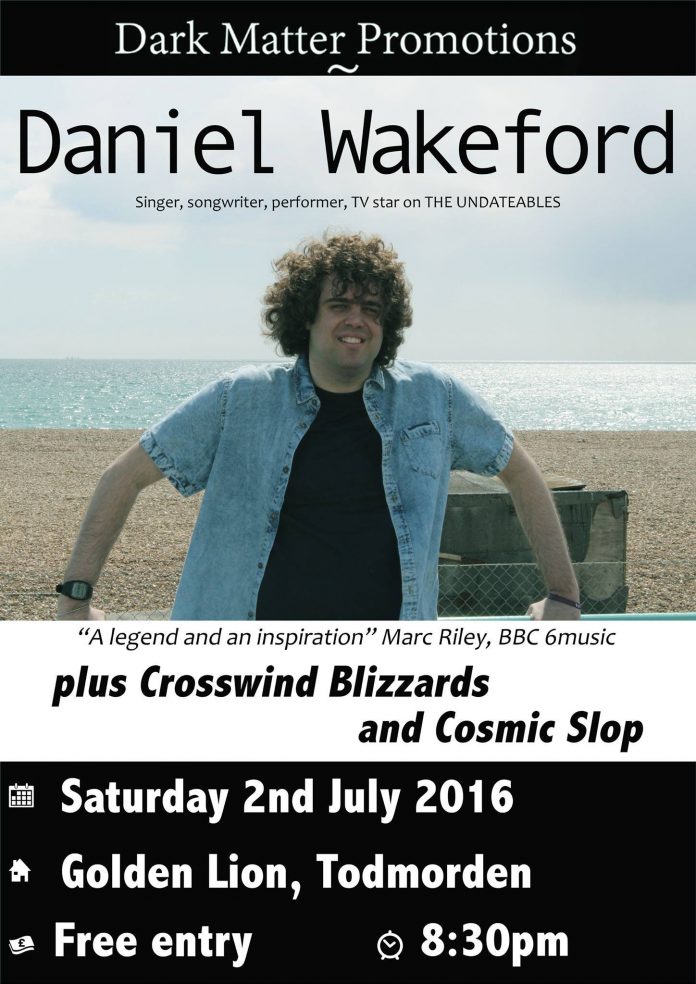 When I originally agreed to write this article it was because it’s being organised to raise awareness of an issue I heartily support. Especially as several of the performer for this event are affected by autism – either personally or through their families – and a number of my own friends are affected by the strains of living in a world where they’re made to feel that they are ‘different’, while the rest of us somehow pass as ‘normal’ (whatever that may be). And I’ve always been very aware that music crosses all those divides. You love something which I hate, I hate something which you love. Or we both love something – and you love it because of the way it’s technically put together and I love it because it makes my emotions go a bit weird. Because music’s like that and nobody has the same reaction as anybody else, and that’s the whole beauty of it.

Anyway, since Dark Matter put this gig together I’ve somehow got myself even more embroiled – because I made a silly joke about the gig needing a middle aged poet banging on about having ME/Chronic Fatigue, and somehow this comment was taken seriously by Lou Karwowski, founder of Dark Matter. So now I’m going to have to be even more careful what I say about them, or otherwise I’m going to be booed off before I even get on stage…

The headline act of the night is Daniel Wakeford– Singer/Songwriter from Brighton – who is starting his tour with an appearance at the Golden Lion. I guess I’m one of the few who didn’t catch Daniel’s show-stealing appearance on Channel 4’s The Undateables, but I know his music is being very well received Mike Watt (Minutemen / The Stooges) says: “Daniel’s got words he sings that really inspire me, great stuff for a tour’s last gig – thank you big time, Daniel.”

According to his press release Daniel ‘’has been writing and recording music since 2009. Working alongside musician Tom Cook, Daniel brings lyrics and a melody to him every Friday and within an hour and a half a song will be created. Taking this approach Daniel has amassed an impressive back catalogue, in excess of 60 songs. 10 of these songs have been taken to Metway Studios in Brighton, re-recorded, given the time and attention they deserve and compiled to create his first album proper, The Songs Of Gigs. His songs are about his life and the things he loves, from his family and friends, to bad feelings and Beethoven.’’

Daniel’s album, ‘The Song of Gigs’ will be released through Carousel, the learning disability arts organisation that supports him as an artist. Alongside this Daniel has teamed up with Constant Flux, with funding from Arts Council England, to put together a tour to promote his album.

Founder of Dark Matter, Lou Kawowski has a background of working with people with disabilities and feels passionately about positively influencing the public perception of disability, to break down barriers and quash some of the stigmas that exist out there. ‘We support an inclusive platform in the arts and are thrilled to be involved in this pioneering project with Daniel and Constant Flux that has been made possible by funding from the British Arts Council,’ she says.

The two support acts of the night (after my own stab at poetry) will be Crosswind Blizzards, a recently formed new punk/dark folk band from Hebden Bridge, and Cosmic Slop, who describe themselves as ‘no shit like it’ who hail from Bacup,

‘I feel really excited about doing this gig because it raises issues that are important to me – there are two of us in the band who have children with disabilities, and it really touches a cord… Because it’s something we live with every day,’ says Skye Shadowlight, who’ll be playing a three string cigar box guitar in Crosswind Blizzards. Skye’s 12 year old daughter, Libby, who will be joining the band for a couple of songs on stage was diagnosed with autism at 5-years old.

It’s hard for children with autism to fit in, Skye explains, because they don’t understand the rules that the rest of society expects them to conform to. ‘I had a funny upbringing and I’m hardly conventional myself, but there are things these children get wrong on a daily basis and you want to help them understand that there are some rules you have to follow. Music is an escapism from the pressures and stresses of trying to fit in, but it’s also a way that my daughter can connect in a world where sometimes she feels like she’s an alien.’

While I’m talking to Skye her daughter Libby is in the background, and I ask if I can have a word. Libby comes to the phone and is an incredibly articulate and thoughtful girl. ‘I have a disability – I have ASD,’ she tells me. ‘Music means everything to me. I’ve been singing forever and I can’t seem to stop. I found a song abut puzzle pieces which is the symbol of autism…’ Libby pauses to sings to me on the phone – and then explains it’s called ‘Take on the World’, the theme song from a show called Girl Meets Word.

Libby says she wants people to know how much music matters to her, and she wants opportunities to share her voice. ‘I want to get myself out there and make myself heard. No matter what, you got to follow your dreams and never give up…’

Music is a brilliant leveller, according to Simon Partridge lead guitarist with Cosmic Slop. ‘‘It isn’t right or wrong but personal and expressive. You hear and feel and make your statement. Everyone does it differently and when a group of people do it together a new identity is formed.’’

Simon says it was years after he’d learnt the great Black Sabbath riffs before he realised that Tony Iommi didn’t have the ends of two of his fingers, and this had helped define his style. He also discovered that Django Reinhart ‘the gold standard in jazz guitar’ was playing solos with two fingers that most people would never be able to do with four.

‘It’s no surprise that music therapy continues to grow as people discover further ways in which music can heal and help all of us. A prominent example recently has been the use of music and sound within dementia groups to activate memory,’ Simon says.

David Foulger, Cosmic Slop’s drummer believes passionately that people who are musicians who also happen to suffer from a disability need more help financially, and support from the community so they can practice and perform their arts. ‘This should be a fundamental human right because of the therapeutic effects music or any artistic endeavour can have on them,’ he says.

Last but not least on Saturday night will be dancing to Dark Matter’s own DJs. And all this is being put on for free – so it’s guaranteed to be a pretty amazing night. So long as you arrive after my poetry.