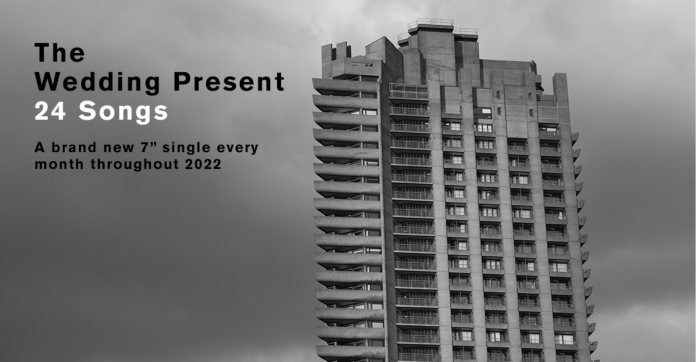 A brand new 7″ single every month throughout 2022

You heard it right. The Wedding Present will be releasing a new piece of shiny vinyl every month for a year, starting in January. Does that sound familiar? For Wedding Present fans you may remember The Hit Parade series.

’24’ Songs sees David Gedge writing with legendary Sleeper guitarist Jon Stewart for the first time, and a more perfect union could not have been predicted.

The first release includes ‘We Should Be Together’, a gorgeous duet featuring David and Louise Wener [also from Sleeper] and it’s coupled with ‘Don’t Give Up Without A Fight’, which combines classic Wedding Present feistiness with a Krautrock finale.

‘We Should Be Together’ will be available to listen to at The Wedding Present’s official YouTube channel from Tuesday 19 October at 2PM.

Each of the records will come in a beautifully designed sleeve featuring brutalist photography by Jessica McMillan. And there’ll be a hand-numbered collector’s box to put them all in, too.

You can buy them one at a time or subscribe for the whole series by clicking here. They will, of course, also be available at all good record shops.

“In 1991, The Wedding Present were rehearsing in a studio in Yorkshire when we hit upon an idea that immediately thrilled us all. Our bass player [Keith Gregory] had been a member of the ‘Sub Pop Singles Club’ – a service that allowed subscribers to receive 7”s released by that Seattle label on a monthly basis. Keith wondered if we, as a band, could attempt a similar thing. In that instant, The Wedding Present’s Hit Parade series was born and, during 1992, we managed to release a brand new 7” single each and every month.

“The Hit Parade went on to become something of a significant milestone in the history of the band and it’s a project about which I’m often asked. As its thirtieth anniversary approached, I began to wonder if we should celebrate it in some way. A ‘Hit Parade Part 2’ didn’t feel quite right, though. Then, someone said to me: “Other bands have released music in similar ways but there has been nothing like the Hit Parade.” And they were right! A 7” single a month seems, somehow, very ‘Wedding Present’. So, inspired by that little idea from three decades ago, we’ve embarked on this new project, 24 Songs.

“Even though The Wedding Present have never been known for taking the easy route, the idea of recording 24 tracks and releasing them in this way could seem daunting to any band. However, I’ve been inspired by the music that has been written since Jon and Melanie joined the group. The thought of celebrating this exciting new line-up with an exciting new series has motivated us all… and I suppose we also didn’t want any of these songs to be hidden away in the middle of an album!”