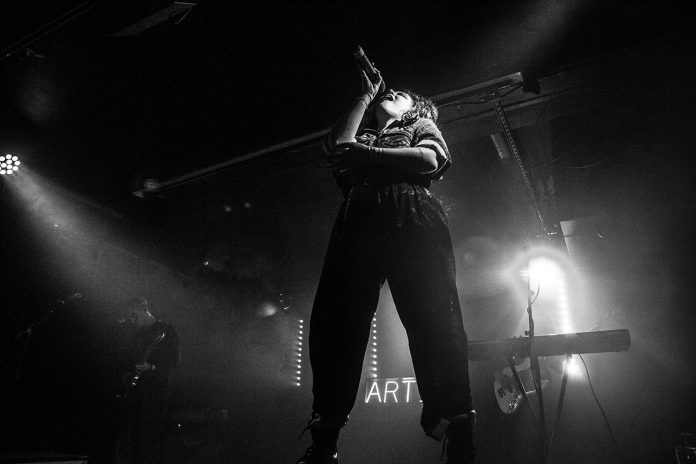 It was with a sense of anticipation that I made my way to The Wardrobe. It seemed ages since I’d last seen Artio live, way too long. Yes, I’d had the ‘Backbone’ EP (read our review) to keep me going but Artio rock live. But first there were three support bands to get us revved up, let’s dive right in.

But before I do (not again – Ed) you should be warned that I’m kind of on the fence about two of the bands and that there will be gushing.

In the period since I last saw Backspace they’ve changed. They’ve got damn rocky and guitar to the max. Yet somehow their songs retain that pop sensibility. This band can write tunes that are catchy. If you’ve caught their last single release – ‘Letting Go’ – you’ll have got an indication of this rockier Backspace.

So this was a new Backspace I was seeing. There are some things that have stayed the same – great playing and great vocals. Rosie’s voice seems stronger now, she needs that with the band roaring away. The guitar is more upfront and there’s some great guitar breaks on show.

I really liked them the last time I saw them live, this time I liked them more. So rock are they now that moshing broke out at one point. I think Backspace are still developing, I’m looking forward to seeing them on their journey.

Ava in the Dark were new to me, apart from a small hint from somebody I knew that ‘their guitarist is crazy’, I had no idea what to expect. Basically they do what I’m going to call darkish alt-pop with a rock edge.

The person I knew was right, the guitar is totally insane, there are more effects than I’ve seen in a long time and there are all sorts of layers of sounds going on. The singer has a voice that could shatter windows.

About half way through their set I was kinda on the fence. Objectively I knew it was good but it wasn’t quite doing it for me. I found that individually the elements were great – the guitar was way cool, the singer was fantastic – but taken as a whole it just didn’t do it for me. There were bits where I really liked what I heard, but that was it. One of those bits was the second to last track which was a darker heavier thing.

This may have just been me, there are bands that I now love but positively hated the first time I saw them. I just may not have been in the mood for what they do. The small hints of things I liked have made me make a note to check them out again. As I said objectively I know that what they do is good. I’d recommend checking out their stuff online, and making up your own mind.

And now to Dakota Avenue. They do that indie-rock/alt-rock thing. You know big big soaring songs. They have great vocals and the playing is really good.

The problem for me is that I’ve just seen too many of these bands, I’ve got jaded and I’ve lost the ability to judge this sort of music.

Again objectively they have great tunes, every song’s an anthem. Visually they are fab. I get that, I really do but on the night they were just not for me. They had a lot of fans in the crowd, so I’m very much in the minority. Check them out, make up your own mind.

And now to Artio. I had planned to move from the photopit about three or four songs in but I couldn’t. I just sat, camera in hand, completely stunned. They were amazing, outstanding, brilliant, wonderful. You get the picture. Artio nailed it.

Touring seems to have made Hol’s voice stronger, there is not one moment where her voice let her down. And that’s important for what Artio do. The band is tighter than a tight thing.

And visually it’s a beautiful performance, the lighting complimented the music, Hol is all over the stage and the two ‘podiums’. The way the stage is set-up and lit makes Hol the centre of the performance – actually seeing Ieuan and Rob through the washes of coloured light was at times impossible – but she’s a great frontperson.

I am biased – i love this band – but picking out a favourite song from the set was virtually impossible. Look if you held a gun to my head and made me, I’d say ‘Arrow’, ‘Dancing In The Ashes’, ‘Fear Is Funny’ and ‘Blood Brother’ were the standouts for me, but only by a really really small amount.

Look I know the band play guitar and bass live but it’s largely synth and sequenced based music, Artio somehow make what they do sound organic. A lot of this is down to Hol’s voice but some is also down to the way they put their music together. What they do live is perform the songs rather than reproduce the recorded music. And the words of the songs and what they about comes through live – Artio tackle some big and important subjects in their songs.

Their set whizzed by, it seemed to be over way too soon, but that’s the thing sometimes with bands who are fabulous. I could easily have sat through them just doing the set all over again.

I don’t really care whether electronic alt-pop is your thing but Artio are a great live band, one you should see.