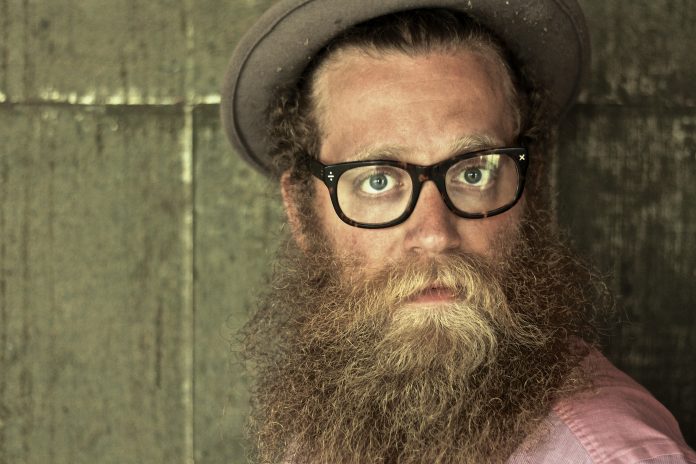 Canadian Ben Caplan is a troubadour in the Bob Dylan or Leonard Cohen mould. Like those distinguished predecessors, his surreal lyrics express a keen appreciation of human absurdity, but his singing is something else. In this respect, he has often been compared to Tom Waits. Perhaps a better comparison is to Dylan’s Greenwich Village guru, gravel-voiced Dave van Ronk. He was recently remembered in the Coen Brothers’ movie Inside Llewyn Davis and described by Dylan biographer Robert Shelton as “a garrulous hairy man…topped by light brownish hair and a leonine beard. He resembled an unmade bed.”

Since the release of his debut album, ‘In the Time of the Great Remembering’, five years ago, Caplan has toured almost constantly, playing more than 1,000 shows, including Glastonbury in 2013.

Now, promoting his second album, ‘Birds with Broken Wings’, Caplan is on a European tour. This finally provided him with the opportunity to make a first-ever visit to Manchester. The chosen venue was Gullivers in the Northern Quarter, and, boy, did the heaving audience appreciate the visit!

There’s no getting away from it: Ben Caplan is a veritable force of nature, a giant in charisma who makes everything around him seem very small. His show in Gullivers’ first-floor gig-room, in fact, was rather like the Berlin Philharmonic Orchestra playing in an, admittedly upmarket, airing cupboard.

Caplan’s backing band, The Casual Smokers, preceded him on stage. On this occasion, they comprised singer-songwriter Taryn Kawaja on backing vocals, piano and melodica, Ringo Starr-lookalike Jamie Kronick on drums, and Jordan Stevens on upright bass.

Caplan’s appearance prompted a stadium roar from the tense crowd. His capacious curls tastefully knotted in a cherry-like chignon, his magnificent beard bristling with the welcome, thrashing an acoustic guitar, Caplan launched straight into the title track of his new album.

This is a song that recalls Dylan’s ‘Highway 61 Revisited’, with its introductory lyric: “God said to Abraham: ‘Kill me a son’.” Caplan’s chorus has: “I climbed up the mountain just to kill my son.” The tune, according to the writer, is about “taking ideas to their fullest potential, not necessarily good ideas”, and seems inspired by the so-called Islamists of ISIS.

“Bring me birds with broken wings, Men with all the answers,/People who have killed, Give me incurable cancers,” he sang. “I want that hopeless-dream depression, Punishments without a cause,/Give me impotent obsession, And disregard for laws.”

Incidentally, the cover image of Caplan’s ‘Birds with Broken Wings’ album tells us a great deal about his purpose as a writer. It’s based on a painting by the 19th century German Romantic artist Caspar David Friedrich called the ‘Wanderer above the Sea of Fog’. Caplan stands in for of ‘the wanderer’ in the image. The point, I would suggest, is that Caplan, like Friedrich, is concerned with contemplating the mess of the human condition.

But, like Dylan and Leonard Cohen before him, Caplan also writes great love songs, and ‘Beautiful’, from his first album, provided a tender foil to the bitter irony of his opening number in the show. ‘Drift Apart’, a breaking-up song from his new album, followed.

With ‘Deliver Me’, we were back to ‘I’ve had it up to here’ mode, with its summation of the world’s sad ways: “And you always eat the mother after drinking her milk.”

But things aren’t always that bad and Caplan soon had the audience singing their hearts out with ‘I Got Me a Woman’. Cue a change of pace as our hero laid aside his guitar and took to the piano for ‘Belly of the Worm’, a cheerful ditty celebrating humanity’s final coming-together at The End: “Don’t succumb to despair/Fill your lungs with the air/And we’ll meet in the belly of the worm.”

Caplan stayed at the piano for ‘Down to the River’, no doubt to underline the point that we should always make the best of a bad job: “You gotta rage against the dying of the light/Live for the moment that’s left.”

Pause for a moment just to allow me to say what a wonderful audience we were. I don’t think I’ve ever been to a gig with so much affectionate banter between star and fans. ‘Manchester’, as ‘Ben’ persisted in calling us, made sure he ‘felt the love’ and the man responded in kind.

The upshot was that, by now, Caplan was almost completely bonkers in the extremity of his performance – in the most charming way, it has to be said – returning to the guitar for his wild rock dirge on the touring musician’s separation from his loved one, ’40 Days and 40 Nights’.

This proved to be the grand finale to an unforgettable show, one which, naturally, the rapturous audience refused to accept. Not unwillingly, Caplan was persuaded to return to the piano for an encore of the barn-storming ‘Stranger’ from his first album. This is a song that speaks of a young man first recognising himself as an artistic outsider. As such, it presaged his new album with its theme of the Wanderer.

You have to hand it to Caplan: he really knows how to round off a performance to make it whole. We’d gone from where he is now as a songwriter all the way back to the very beginning. Clearly, there was nothing more to sing, nothing more to hear. It was time to go home, still glowing from a great night out!