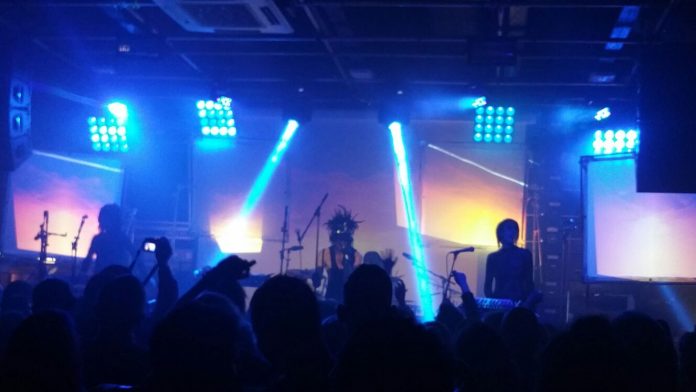 Grinding out hard-core, techno inspired fury from the outset, it soon became clear, moments after IAMX—like a beast from the nether world—began to wield their might and invoke the hammer of grisly, debauched, hypnotic trance, that all those in attendance should brace themselves for a twisted ride through the tortured mind of Sneaker Pimps co-founder, Chris Corner.

Addictive, and on occasions bringing to mind Fields of the Nephlim, the mood generated was deeply gothic and led me to recall the flamboyant and grotesque Megadog Midi Circus, a nineties staple for those like me reared on warts-an-all electronica. And the apocalyptic visuals, ricocheting across screens which resembled the shards of a damaged mirror, along with an unruly cascade of ambient beats, together coalesced to somehow create a melodious sound. One which had the old Goths and Rockers present clamouring for more. This topped off with Corner’s delivery—he used two microphones, screaming into each with equal contempt—was enough to lift the spirit and make those such as myself, with no prior experience of IAMX or their music, acquiesce to their charms, though a little wicked they may be, and enjoy the evening for the wild and raucous happening it was.

So, in retrospect, I think I’m left to sum up… The night was good—my friend who accompanied me most definitely enjoyed herself—and IAMX, if you’re a fan of that no-holds-barred, Rage Against The Machine fearsome delivery, are a band for you, and an outfit you should make a point of seeking out.