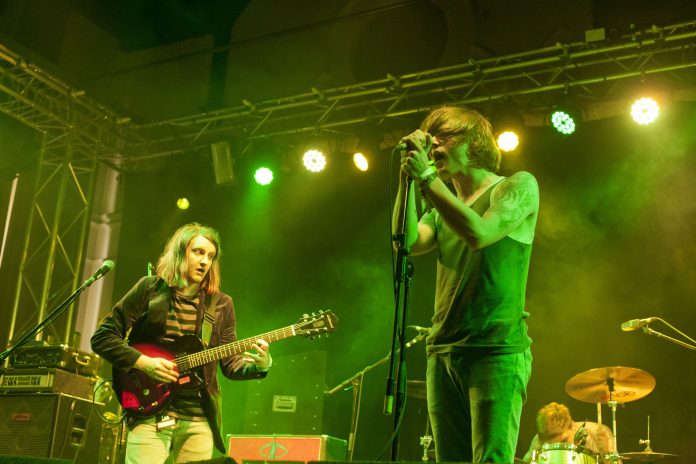 This Castleford band is quickly becoming hot property in the rock world, if the hype is to be believed. They toured with Enter Shikari earlier this year and now are rapidly becoming the band that festival organisers want on their line-up. In fact, they have just been announced to play the Vans Warped Tour at Ally Pally in October.

Always one for liking to catch a band on the up, particularly a local one, I went to see their gig at Unity Works – the main stage set up in Wakefield for Long Division. The anticipation was rewarded.

They play hard and they play fast and stay tight throughout; whilst jumping, thrashing and crashing around, somehow managing to avoid each other using the smidgen of space they have in between instruments and amps. They give their all to the performance – sweat, saliva and beer rains. They look and play as if they have played for the last 24 hours (and no doubt they have!) and they probably could go on for another week. 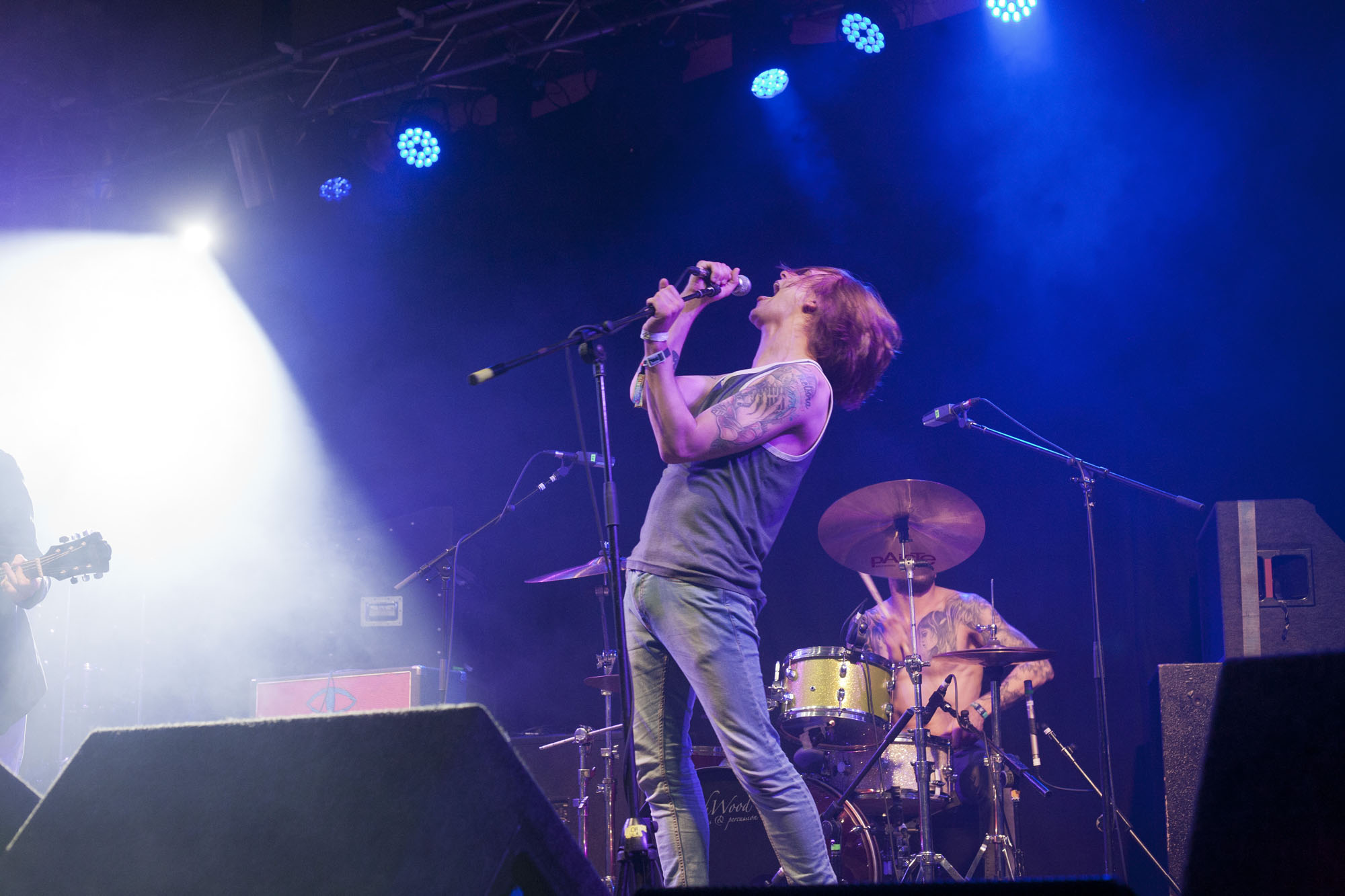 This a thrilling band to watch live, I left buzzing (although their frenetic movements may deter those who like the performance to not detract from the music). There is definitely an air of Iggy Pop, Ian Curtis and Kurt Cobain about the way Jason, the lead vocalist moves. These musicians have a serious amount of skill between them that backs up the hype. Keep an eye on these lads, I wouldn’t be surprised if you’ll be hearing a lot more about them soon. 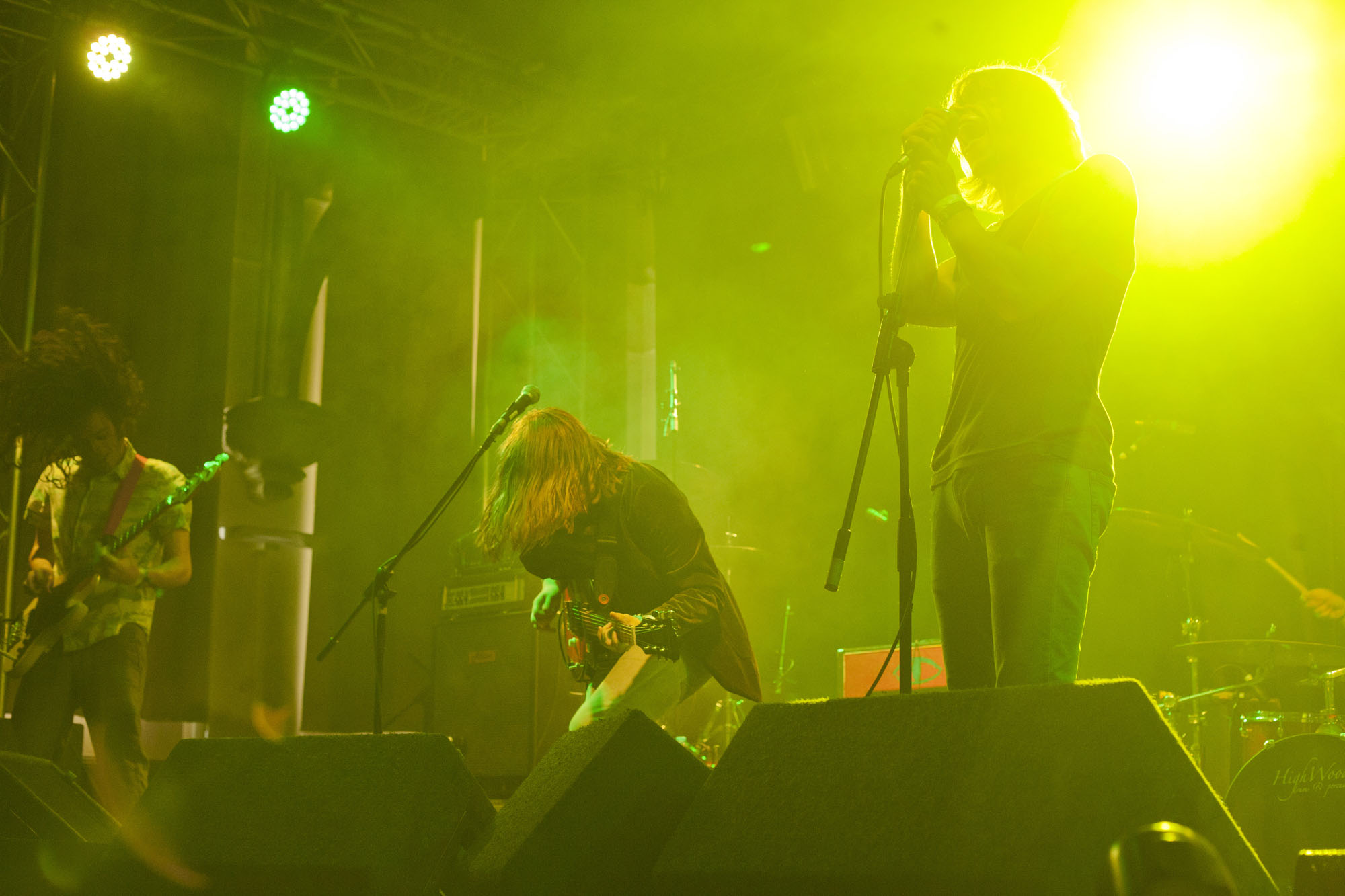 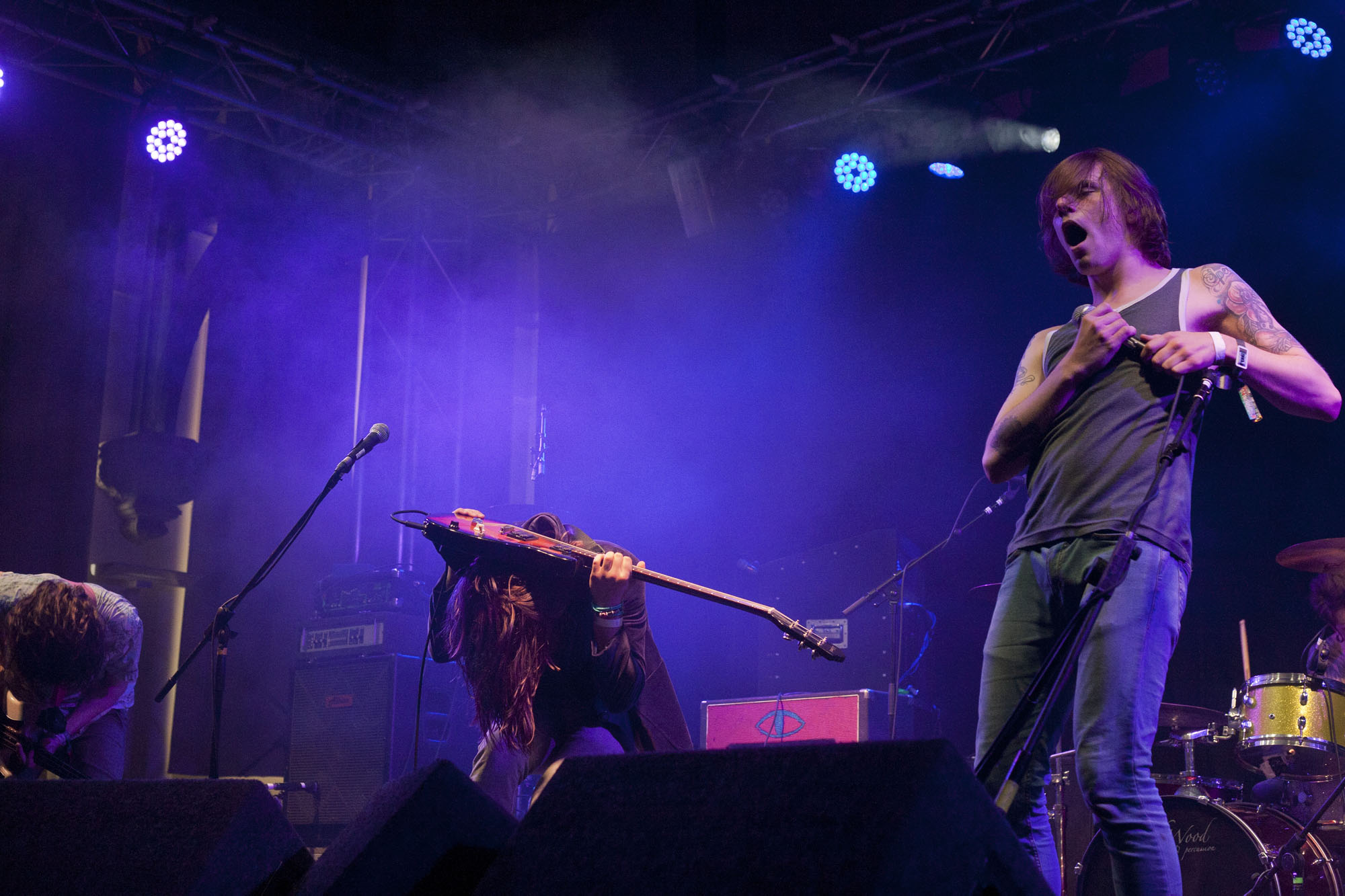 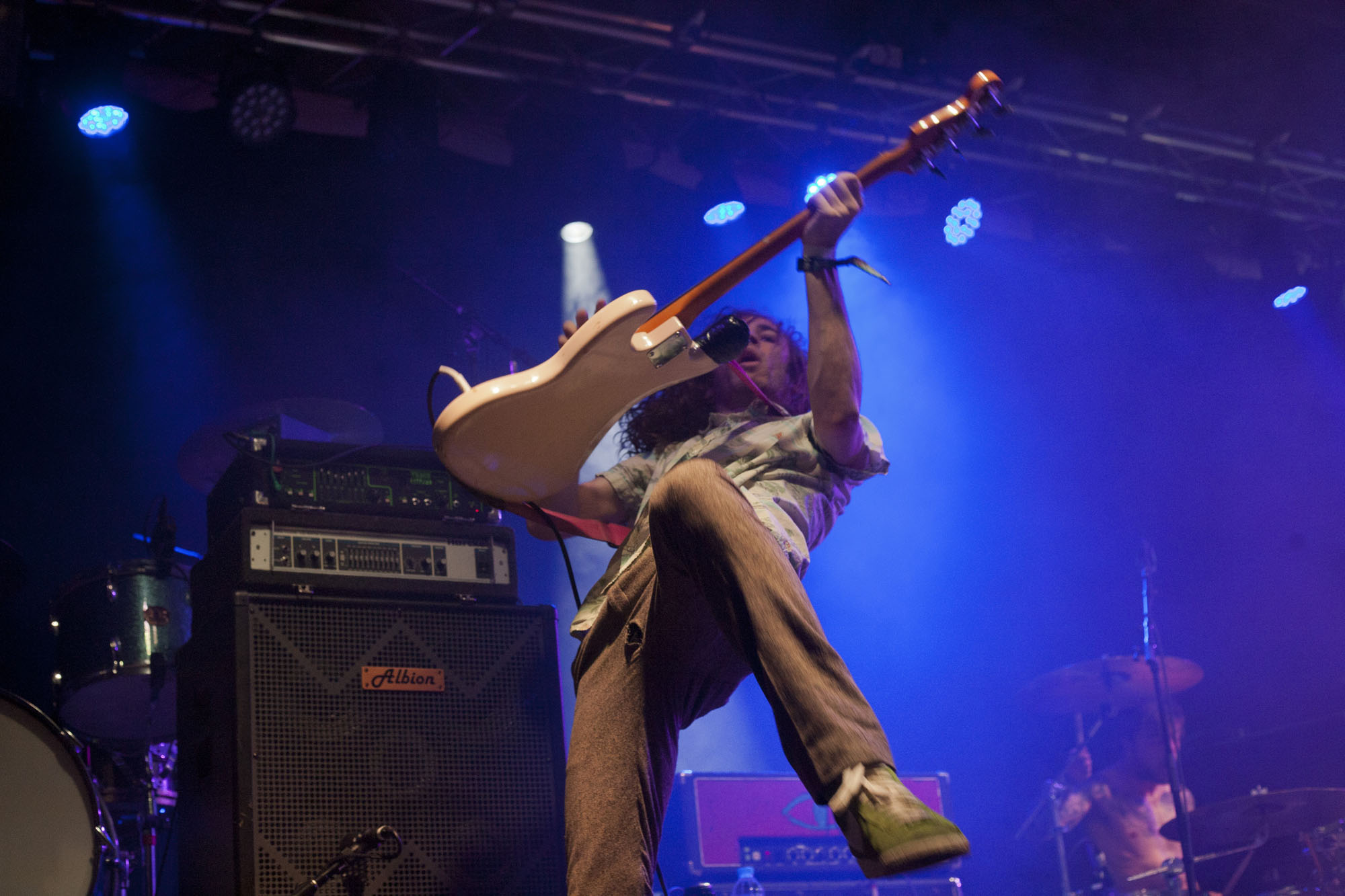 After their gig, I had the pleasure of being invited onto Allusondrugs’ tour bus to have a chat with Drey (guitarist), Damian (guitar, vocals) and Jason (lead vocals) about their debut Download appearance the previous day, Long Division and the Wakefield music scene.

LSF: How was Download? Have you been before as fans?

A: Really good, no we haven’t… what a way to start Download! Even though the weather was bad. The sound was great. We played Jake’s tent and it was full by the time it finished…that might have been something to do with the rain! The crowd were great, such friendly people and we saw a lot of black clothes and big, tall men with long hair going ‘rah’! We were watching Slipknot from the wheelchair bit, saw wheelchair users rocking out – it was proper great!

LSF: What is your favourite thing to see from the stage?

A: People singing back at you.

LSF: How would you compare Download to Long Division?

A: Download was a landmark gig for our CV so it had to go well. That means you’re more nervous about it. We’ve done Long Division a couple of times before, so we knew what to expect but we still put the same effort in to the performance. We give everything to every gig, and the fans. We do it until we throw up. Jason (singer) does anyway…

LSF: What other bands or artists from LD would you recommend keeping an eye on?

LSF: What is it about the Wakefield area that is creating such a vibe?

A: Good promoters are getting on it.

LSF: And such good music?

A: There’s absolutely nothing to do here, apart from do that. Your brain wants stimulation or maybe it’s the poisons from all the power stations!

LSF: Is there any competition between bands around here?

A: We all get on, everyone’s a musician here. Bands shouldn’t be like that as everyone is in it together.

LSF: What advice would you give to young starters in bands?

A: Work very hard, play as many gigs as possible, take pride in your work and don’t slack off.

LSF: Is it enough to be good or do you need to network too?

A: We applied for loads of festivals when we were starting out and got three replies, it’s hard to get in that way. Our advice would be to network, be a nice person, don’t be a dickhead. It helps if you’re really good as well…. Suppose they wouldn’t talk to you if you weren’t. A promoter who is good at their job wouldn’t put forward shit bands.

LSF: Do you do your own promotion?

A: As much as we can. We have a booking agent and manager. We’re still associated with Clue records. A lot of our releases have been DIY or self-releases more recently. We’re still feeling stuff out for ourselves.

A: Play all the festivals and try and get rich. Get rich real quick! 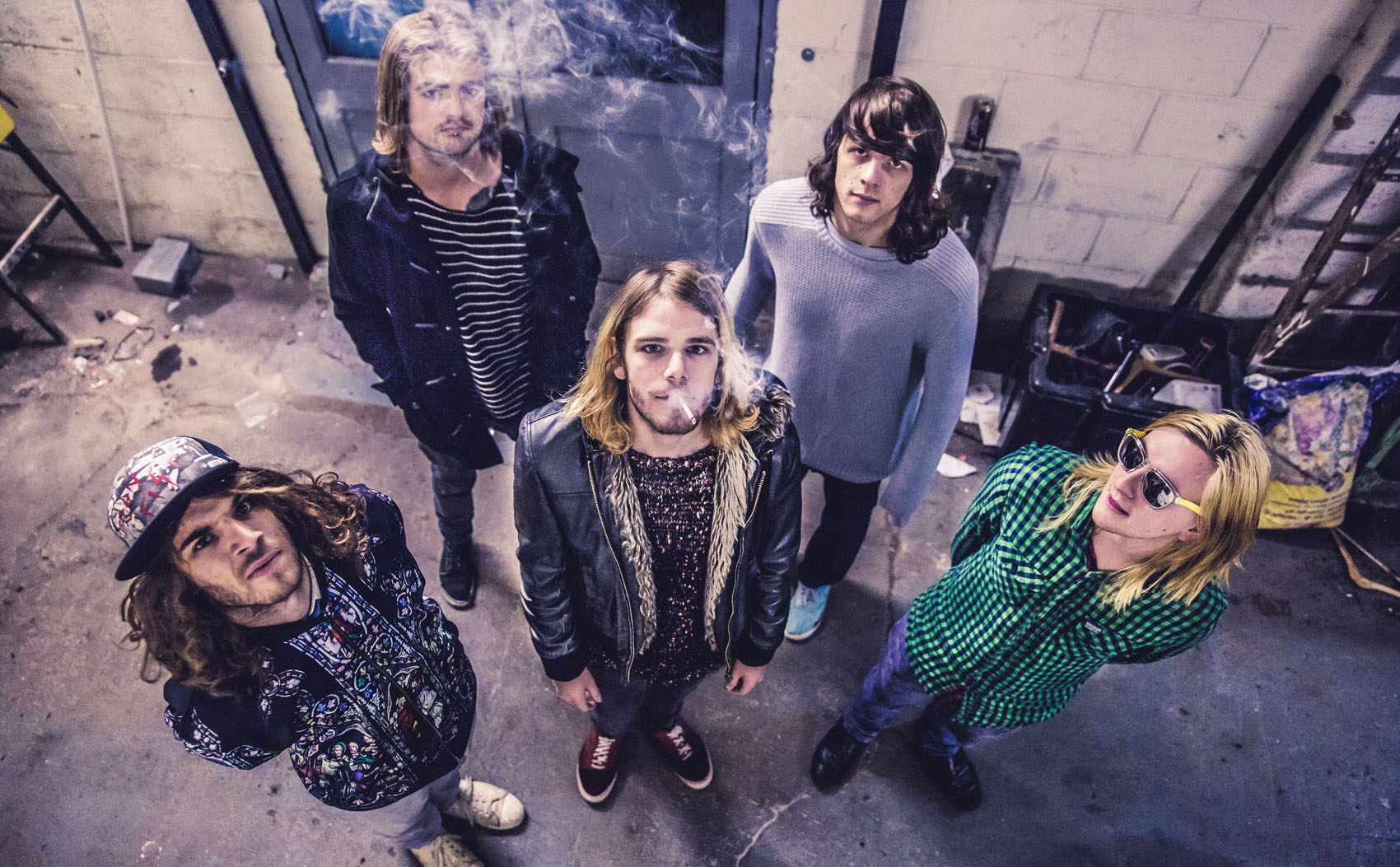