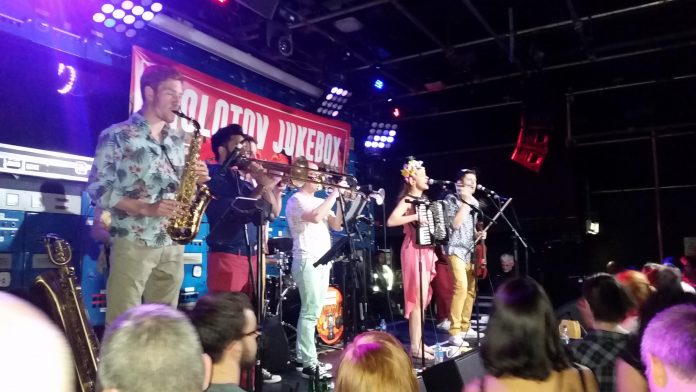 It was a dank, dreary, wet evening and we’d just surfaced from hail, rain, snow and in some places, thunder – in April – so Molotov Jukebox was just what Manchester needed that evening. Entering through the doors of Gorilla was more like landing amidst the Rio carnival rather than just another Mancunian venue; the place was simply bursting and bouncing with people and colour. Everyone seemed in a festival mood; it truly was like entering a different world and the sunny, yellow lighting actually started to make me feel as though I was on some sun drenched beach at some fiesta or other.

Molotov Jukebox seem to have a huge following as the venue was packed out with fans in joyous party mood many of whom were wearing flamboyant headdresses, which seems to be a ‘thing’ for this band.

The sunny atmosphere only intensified as the band exploded colourfully on stage – all 12 or so of them!!  There were loads of them – armed with all manner of instruments…a violin, drums, guitars, an accordion and a mini brass section of saxophone and trumpets …. let the carnival commence!  The crowd were delighted to see the band and the band delighted to see them… like old friends having an en masse catch up.

Frontwoman, vocalist and accordion player Natalia Tena was very charismatic and banter with the audience came easy – giving bananas out to the crowd on a whim for best headdress, or dancing, or t-shirt was a quirky part of her repertoire. I was also informed by a fan that she is also an actress most famed for her role in the Harry Potter films. All this and she has an entrancing voice too, which I felt particularly shone through when she sang the reggae/hip hoppy/rap style tunes.

I was immediately hooked by the uniqueness of Molotov Jukebox. Their overarching vibe was gypsy, but the array of instruments allowed for a medley of different sounds. The first tune transported me to a Russian wedding, starting slow then speeding up. The second tune wouldn’t have sounded out of place in a French cafe as the accordion was the dominant instrument. Molotov Jukebox have been described as ‘gypstep’ due to their fusion of hip hop, reggae, rap and at times synthy sound. They really are a creative, exciting, accomplished set of musicians who are well rehearsed and know how to entertain.

Again, sound was an issue as Natalia’s the lyrics couldn’t be clearly heard, which when it comes to dub-step/hip hop/ rap is really a must. There were a number of violin and trumpet solos, which did add variety to the set, but overall, an hour and half set was a bit too long and the last handful of tunes, whilst retaining their  fun, carnival ambiance, started to get a bit samey. If you’re heading to a festival this season, Molotov Jukebox are a must-see, bound to leave you with a smile on your face, possibly a banana in hand and wanting to don a festival headdress. They have party fun written all over them!