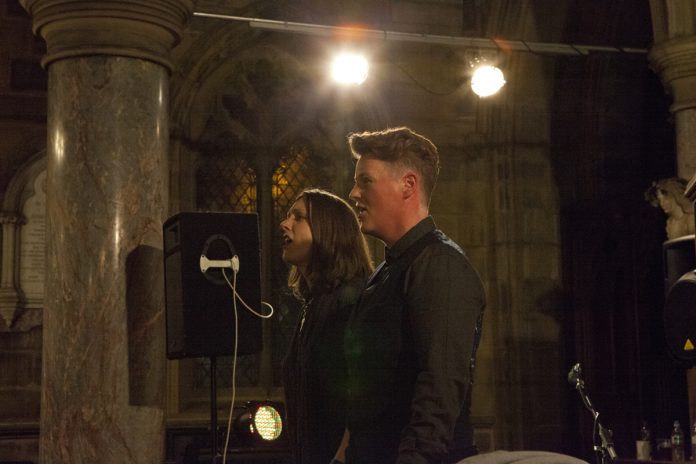 As you may have read in my previous gig reviews I’m not a huge fan of folk music so it was with a degree of trepidation that I set off to the Unitarian Church for the Todmorden Folk Festival Saturday night concert. I had a vague idea of who was playing having already seen Richard Parkes perform at the Floody Marvellous Benefit gig and I knew of, but had not heard, anything by the night’s headliners O’Hooley and Tidow. Mr Wilson’s Second Liners were to be honest a complete mystery to me.

Of the three acts Richard Parkes is perhaps closest to what most people think about when they think about a solo folk singer… but he has some surprises up his sleeve.

Richard gave us a mix of moving folk material and rousing non-folk material. I especially enjoyed the rendition of ‘Uncle Joe’s Minty Balls’ which had everyone’s feet tapping. Of the more tradition folk material my favourites were a song that was about people coming home from war (and I’m sorry that I didn’t manage to catch the name of this song) which was very moving and the by-now Calder Valley traditional song Richard wrote about flooding. During this song he switched from playing guitar to singing unaccompanied due to a technical problem. This was hugely effective – and left me wondering if maybe this should become the way he performs this song in future. I really enjoyed his performance and I look forward to seeing him again in the future.

Our MC’s – Sonya Moorhead – introduction to Mr Wilson’s Second Liners – left us somewhat mystified. She told us we needed to think of folk music as ‘ music for the people’ but that didn’t fully prepare for what came next. If you’ve every wondered what 80s rave and techno classics would sound like played by a New Orleans marching band, well wonder no more. From the moment Mr Wilson’s Second Liners marched down the aisles the whole church was up and dancing. It was complete and glorious chaos. 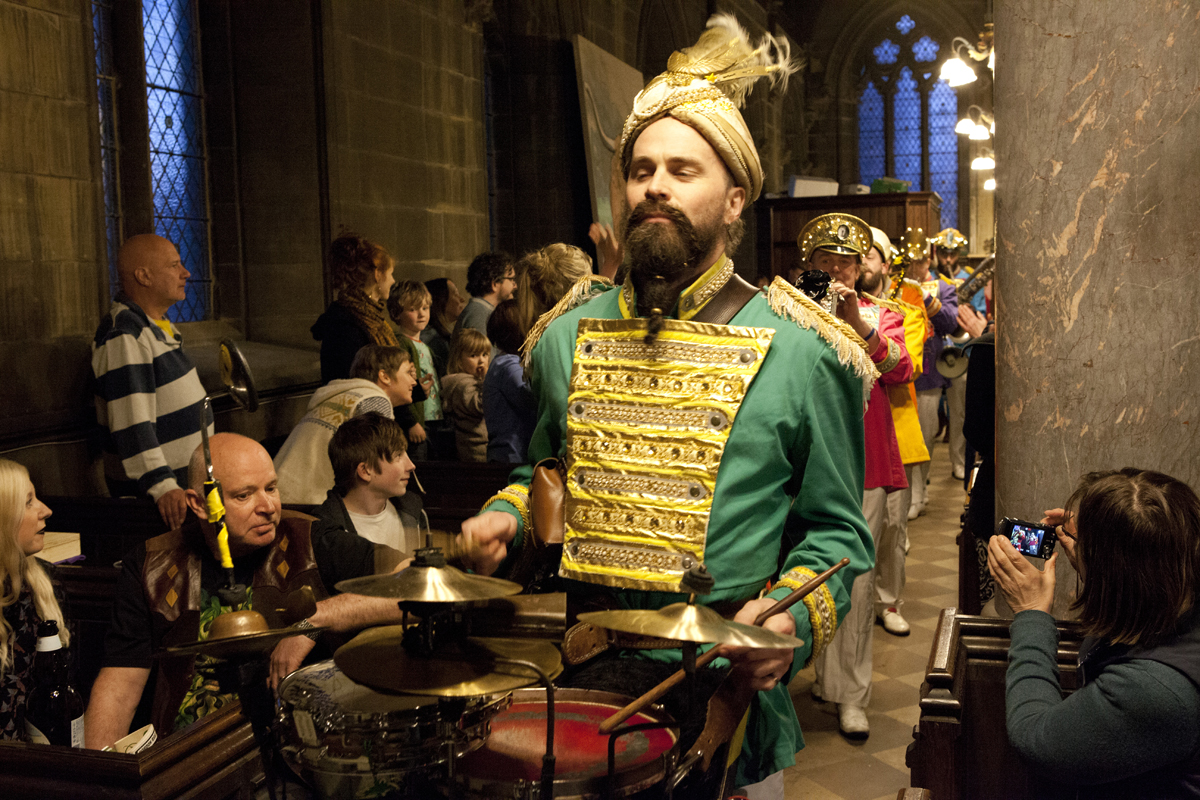 The more they played, the more the audience was into it. Band members started standing on pews to play, megaphones were deployed and all in all, it was a complete rave. 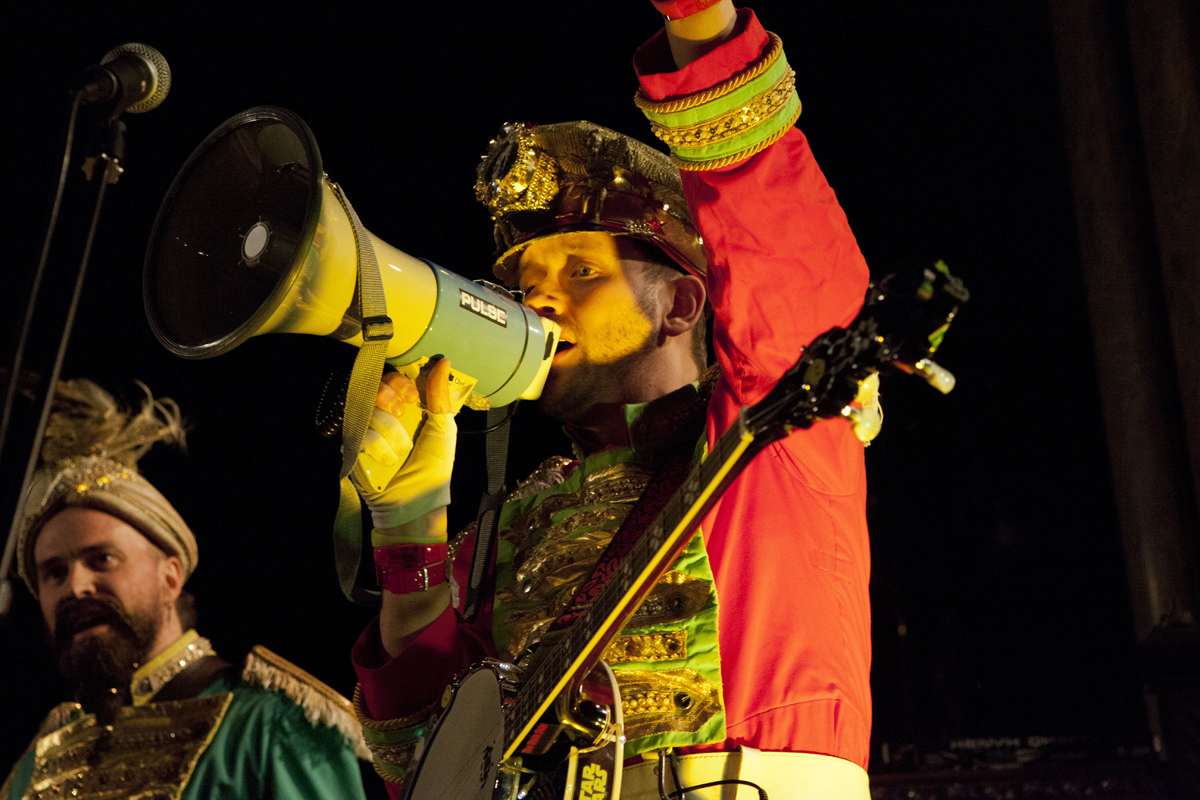 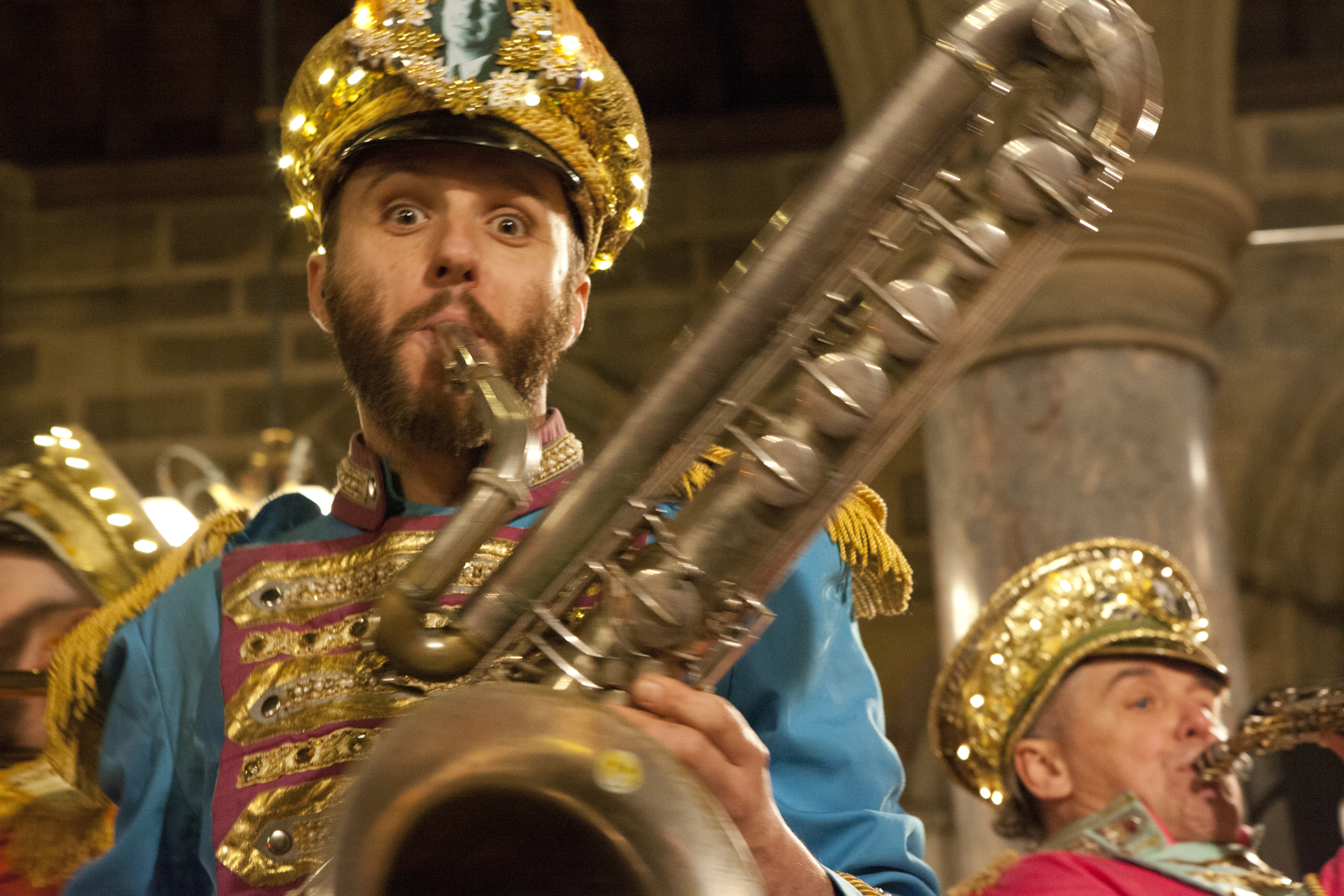 And then suddenly there were techno clog dancers and it all just kicked off. There was random clog dancing in the aisles, clog dancers on makeshift podiums, and frankly inappropriate ‘throwing of shapes’ quite wonderfully inappropriate for a church in Tod. It all became rather surreal. At one point I actually began to question whether this was quite real or whether that welcoming mug I had on arrival contained something a bit stronger than Yorkshire tea…. 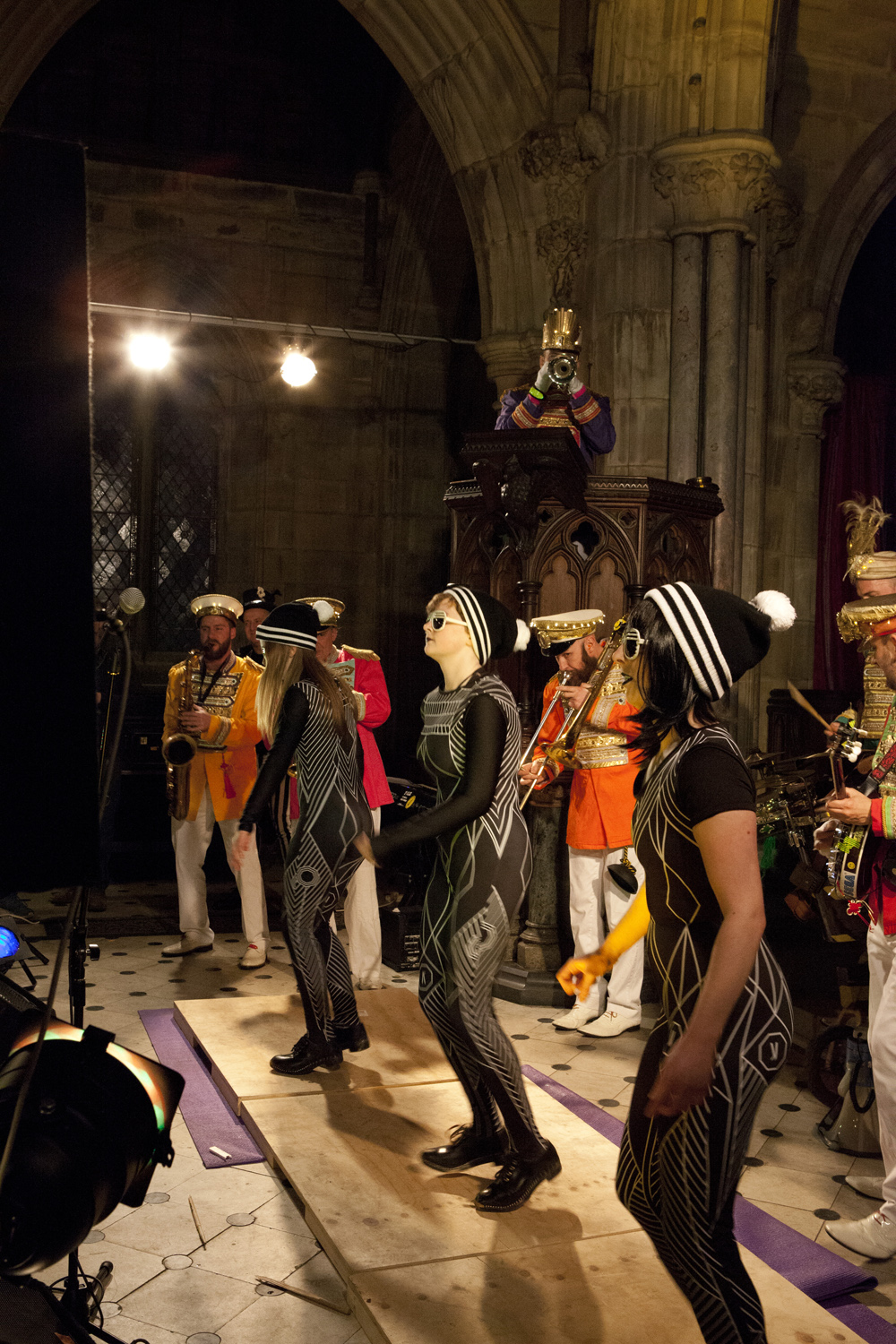 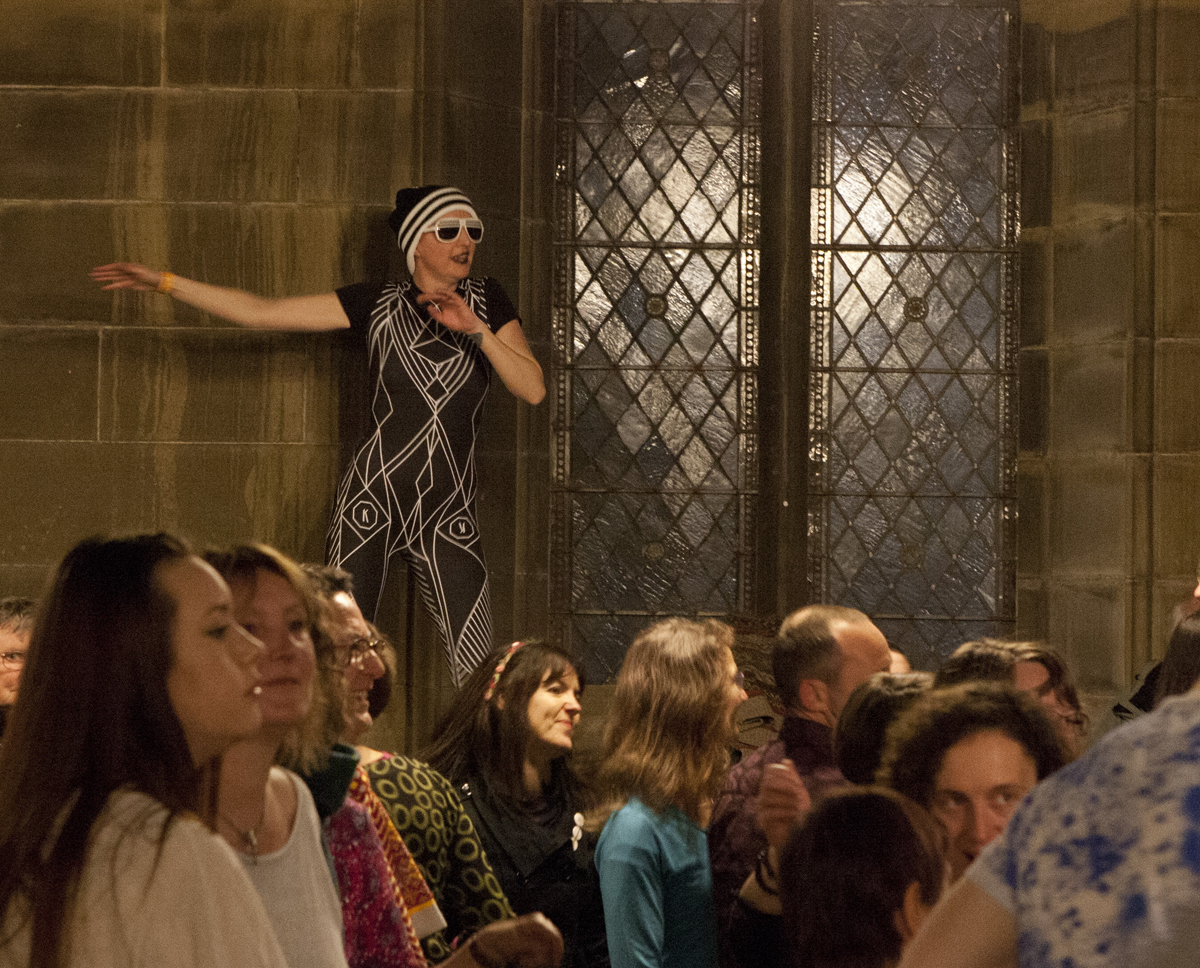 Readers, it was complete fabulous, if you get a chance to see Mr Wilson’s Second Liners, do and go prepared to be amazed. Can’t promise you techno clog dancers though.

And so to O’Hooley and Tidow – or as we got to know them Belinda and Heidi – who could be described as contemporary folk singers or people who sing and play music which is folk influenced. They have received lots of critical acclaim in the national press recently so I was looking forward to hearing them. 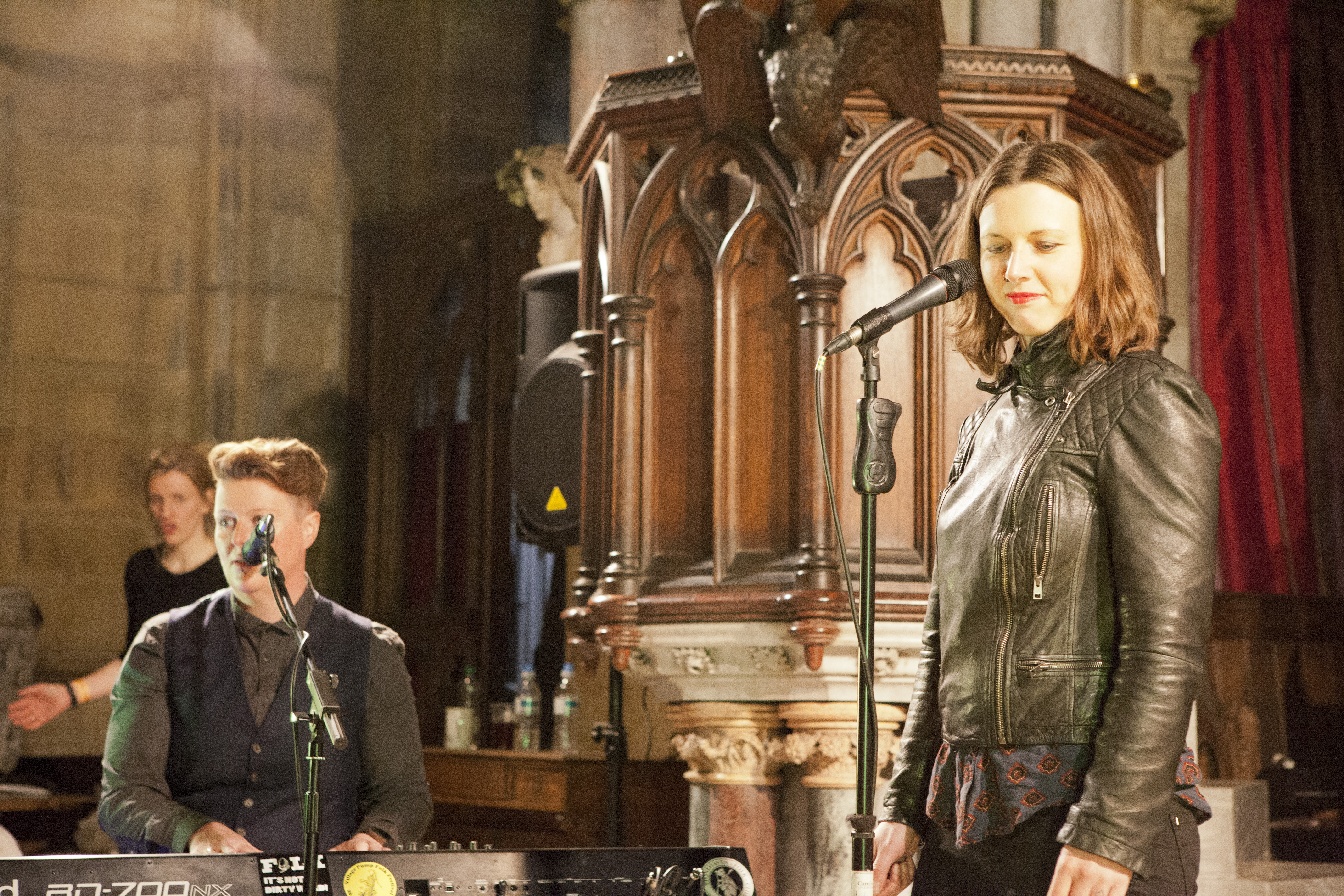 Just so you know who’s who, Belinda O’Hooley sings and plays piano and accordion, and Heidi Tidow sings. Sometimes when they sing together it seems as though there’s more than two voices.

For most of the songs there’s a reason; a story or an incident that triggered its writing. Their first song ‘The Hum’ is about a town and the hum is the sound of its people working. Heidi and Belinda explain it was inspired by a person who bought a house near a factory but when they came to see the house the factory wasn’t at work so they didn’t hear it working. Once they moved in they complained about the hum from the factory. However another neighbour pointed out they didn’t mind the hum at all, as it signified that people were being employed. The song itself is words and music perfectly blended together in a way that really captures this ‘hum’.

To be honest I could just tell you in huge detail about every song as there just isn’t one that I didn’t really enjoy or find myself moved by, so I’m just going to pick out my favourites. These aren’t going to be in the order they came in the performance. 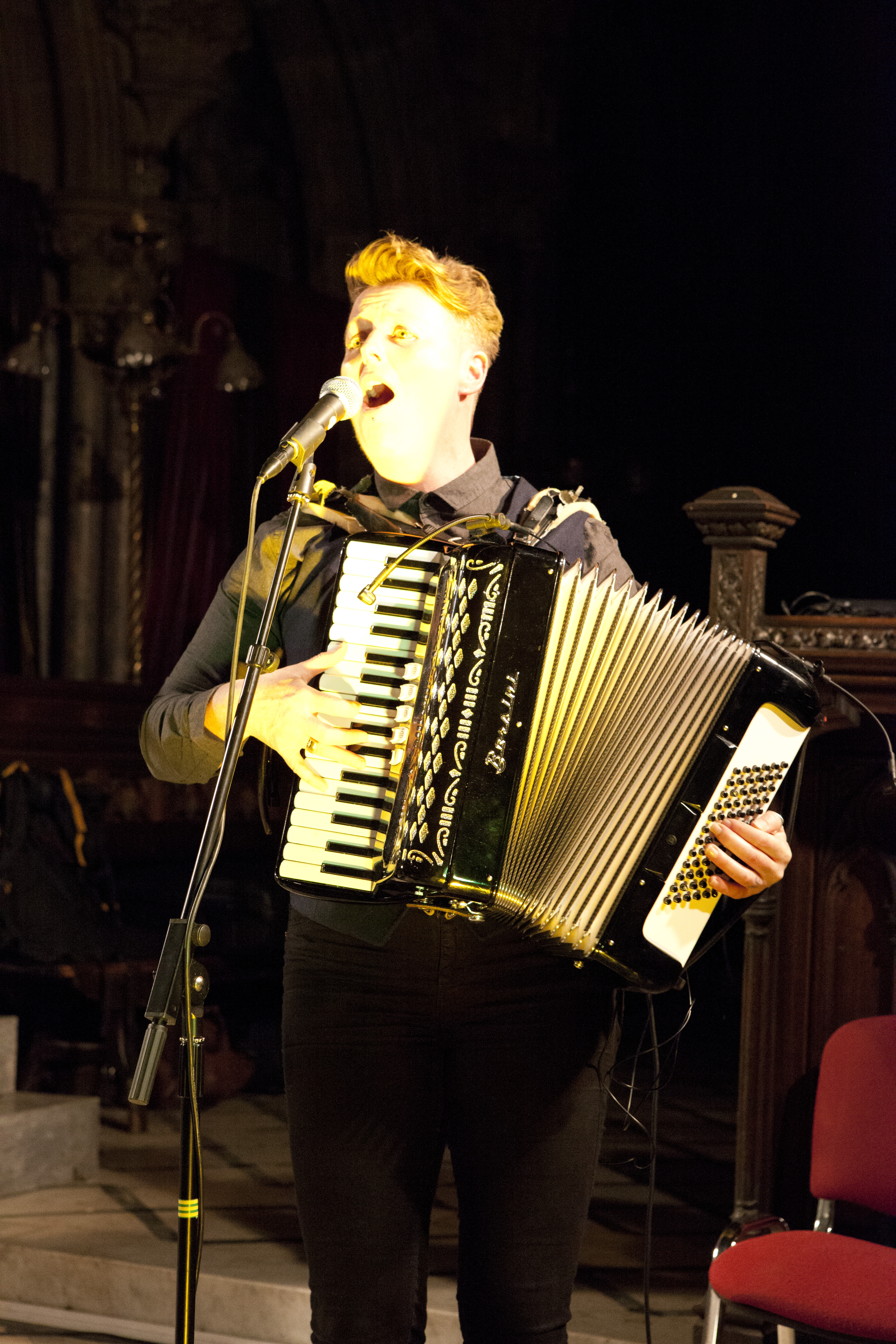 Belinda played something instrumental on piano called ‘The Copper’ – which reminded me of a Scottish air. This was taken from their album ‘Summat’s Brewin”. The piece itself is about the vessel that the beer is brewed in, and there’s a lovely bubbling to the music that evokes that.

There’s a traditional – but with some rewritten lyrics – sailors’ drinking song, with Belinda on accordion, that’s really great fun. Oh and there’s kazoo playing on this as well.

‘Like Horses’ was their final song in the set proper and they dedicated this to Tony Benn. This uses what I assume is echo effects on the vocals as it builds to a finish. The song asks why can’t we be all ‘like horses’. It’s huge and epic and the words are pure poetry.

‘Beryl’ is a song about Beryl Burton the cyclist. This song was inspired by a Maxine Peake’s recent play. For me this is a joy as I’m a big fan of cycling and Beryl Burton is one of those people we definitely need to celebrate more – she came from Leeds so she’s one of our’s (visit this page to learn more about Beryl). The music in this song conjures up the rhythm of cycling and the words tell Beryl’s story. Just lovely. 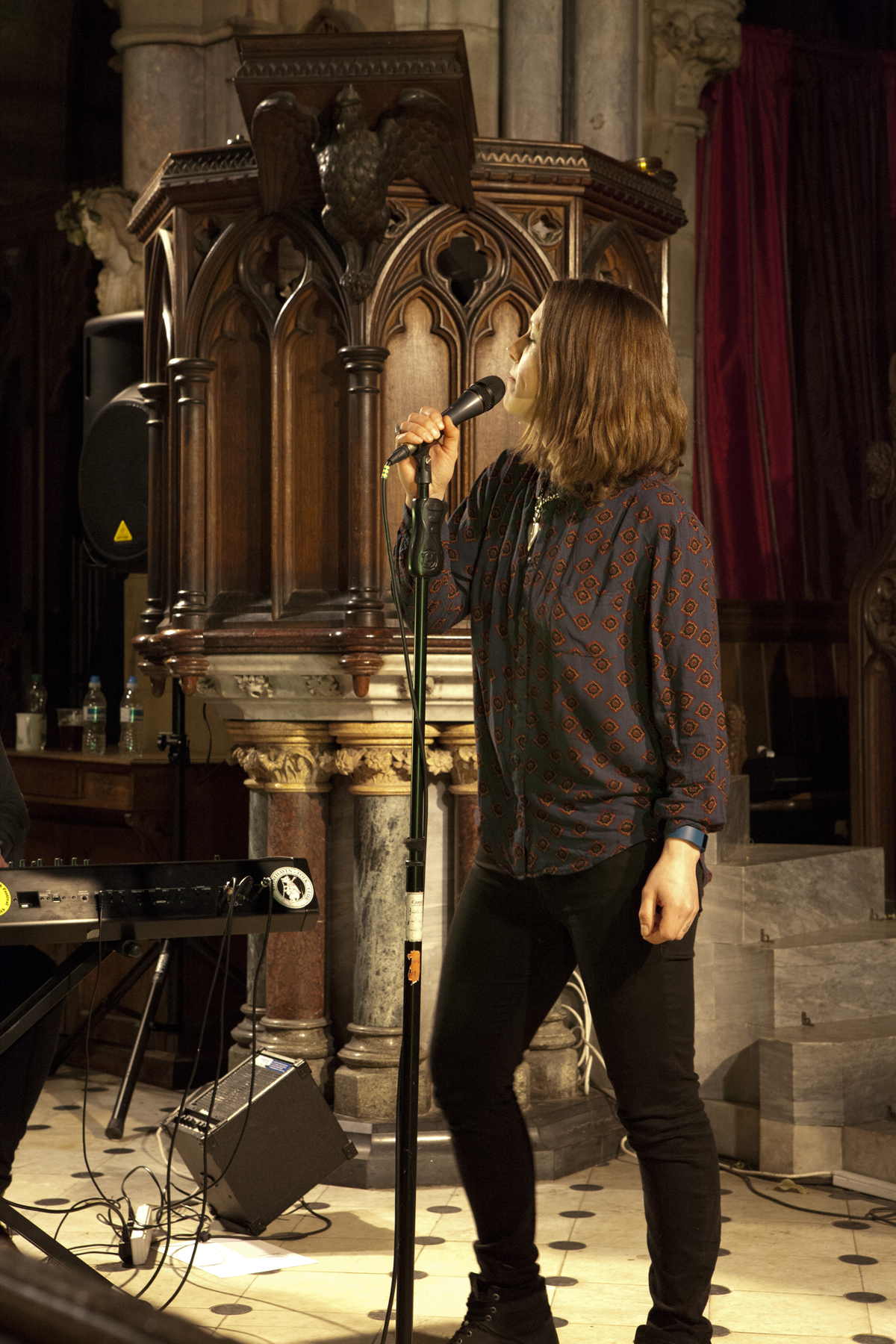 My favourite song was the song that affected me the most. ‘Two Mothers’ was inspired by a film about the child migration (when children were sent to places like Canada and Australia from the UK). They also described it as a lullaby to the adopted. This was a very moving song, and I have to admit I was in tears for most of it. I’ve spoken to other people since who were there and I wasn’t the only person in tears during this song.

They encored with a rousing song called ‘Gentleman Jack’ about that had the audience singing along and a lovely unaccompanied song with them singing in the aisle of the church. They end with a hug and this just seems ‘right’.

I’ve been trying to come up with a way of describing the music of O’Hooley and Tidow and the best I can come up with is, it’s like a huge hug. They drawn you in and take you through the emotions but you always feel safe in their hands. I can’t recommend them highly enough. Don’t be put off by the ‘folk label’ this is great great music for everyone – that is from the heart. I’m now a fan – as if you hadn’t guessed already.