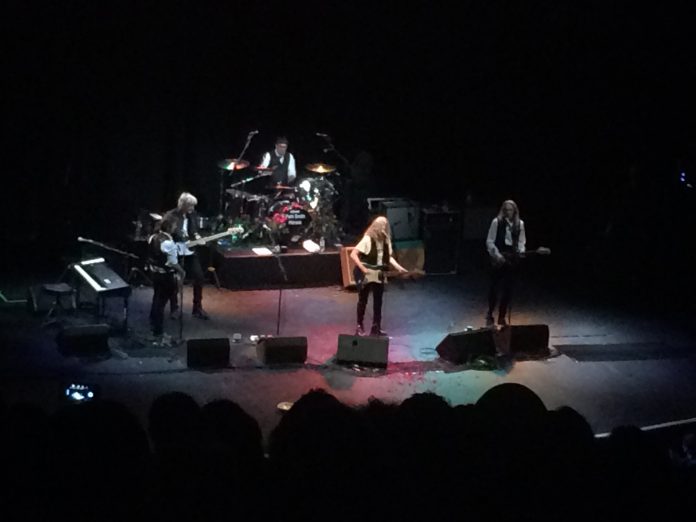 In 1975 Patti Smith released her debut album ‘Horses’ which went on to be a major influence on the New York punk scene and is still widely regarded as one of the greatest albums ever recorded. To celebrate the 40th anniversary of this classic album, the ‘Godmother of Punk’ is on tour.

Alongside her is a band featuring two of the original musicians from that first recording, Lenny Kaye on guitar and Jay Dee Daugherty on drums with Tony Shanahan on bass and Jack Petruzzelli on guitar/bass/keyboards. They are performing the entire album in sequence at each show.

The lights go down in the Apollo and Patti Smith strolls onto the stage to rapturous applause. She’s instantly recognisable in her black suit, white shirt and big black boots. No time is wasted as Petruzzelli plays the opening notes of Gloria (In Excelsis Deo) and Smith drawls ‘Jesus died for somebody’s sins but not mine.’

Her voice, deepened with age, is still a formidable force well capable of hitting those high yelps and furious snarls. Despite having, no doubt, performed these songs thousands of times over the past four decades, Smith delivers them tonight with the same power and intensity that was captured on the original record. The band follow her with an escalating rhythm, before exploding into the chorus.

‘Redondo Beach’ follows with the gentle reggae rhythm giving everyone a breather from the furious opening. The changes in pace and mood throughout ‘Horses’ are part of what makes it such a great album and it translates to a varied and interesting live set. The epic tale of death and loss that is ‘Birdland’ is next. A mesmerising performance, Smith switches from softly spoken verses to anguished howling as she throws her lyric sheet to the floor. The band backs her words with screaming guitar and the piano line which anchors the song throughout.

Smith takes time between the songs to talk to the crowd and her relaxed manner and disarming honesty make the gig more intimate. She tells a story about being in Manchester in 1978 and buying a Rickenbacker from a guitar shop that reminded her of a scene from the Dylan documentary ‘Don’t Look Back’. (We’re even treated to a pretty spot-on impression of His Bobness.) ‘Husbands come and go,’ says Smith, ‘but I still have the Rickenbacker!’

At the end of a frenetic ‘Free Money’ Smith politely informs us that we’ve reached the end of side one and it’s now time for side two, before the band starts with the upbeat ‘Kimberley’. And before the dramatic ‘Break It Up’ begins, we’re told it was written about the Lizard King himself, Jim Morrison. At times it feels like a listening party for the album – hosted by the artist herself.

One of the highlights of the set is a blistering version of the emotional rollercoaster that is ‘Land’- a swirling, intense, psychedelic three-part punk-rock opera based on a character from a William Burroughs novel. It mixes Smith’s poetic lyrics with a quasi-cover of the song ‘Land of a Thousand Dances’ made famous by soul legend Wilson Pickett. It segues from the tale of ‘Johnny’ and his spiritual journey, to a hollered chorus of dance moves, and this live version ends by bleeding back into ‘Gloria’ for a thunderous finish.

The ‘Horses’ set finishes with the fragile lament, ‘Elegie’. The song was originally written about the death of Jimi Hendrix but tonight Smith tells us that everyone has experienced loss of a loved one and so this song is for each of them. As the song comes to a close Smith starts to call out the names of the dead and the crowd applauds each name. Johnny, Joey and Dee Dee from The Ramones, Lou Reed and Joe Strummer, Robert Mapplethorpe and her late husband Fred ‘Sonic’ Smith. Lenny Kaye chimes in here with Tony Wilson which gets a loud cheer from this Manchester audience. As the audience starts to shout other names she smiles warmly and finishes the song saying ‘Yes, all of them’.

The second half of the set is comprised of other Smith standards such as ‘Privilege (Set Me Free)’, ‘Dancing Barefoot’ and a blazing version of arguably her most well-known song ‘Because the Night’, which was co-written with Bruce Springsteen. As a tribute to ‘New York’s greatest punk’ Lou Reed, the band play a medley of three Velvet Underground songs (Rock N Roll, I’m Waiting for the Man, and White Light/White Heat) as Smith walks down by the front of the stage, shaking hands with her fans. In a moment of spontaneity, she gives us a small excerpt from her early B-Side ‘Piss Factory’ which ends with delighted audience members helping her out with the words when she stumbles.

Patti Smith is by turns sweet and irritable, spitting punk and swaying hippy, equally at home dancing across the stage singing the positive chorus of ‘People Have The Power’ or furiously tearing the strings from her guitar with her bare hands during the chaotic closing cover of The Who’s ‘My Generation. It’s her fearless nature that makes her such a must-see performer and tonight’s breath-taking gig was proof indeed that the punk poet laureate is as fearless as ever. 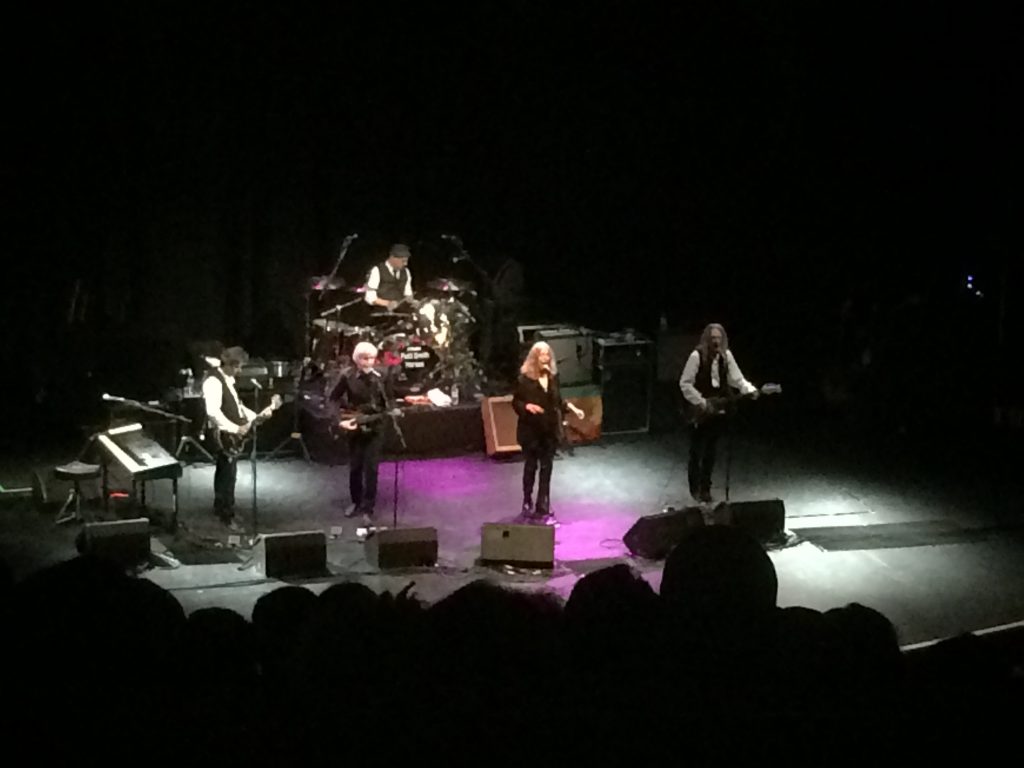 Encore:
People Have the Power
My Generation