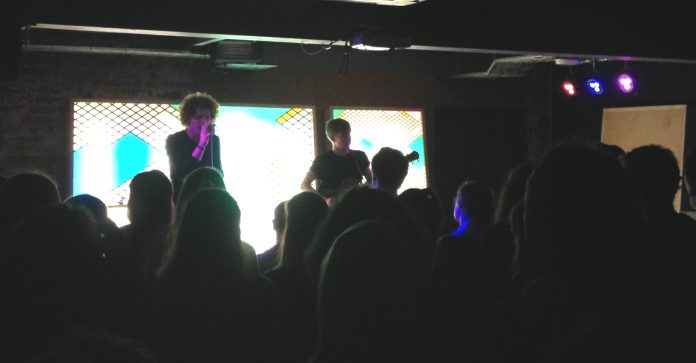 Seafret, who originate from Bridlington, played an intimate show in Leeds on the 4th February. This was the last date in a series of in-store shows at independent record stores around the country, following the release of their debut album ‘Tell Me It’s Real’, which came out on the 29th January this year. The Leeds leg of the tour took place at Headrow House, and was hosted by independent record store Crash, situated just a few doors down from the venue.

The free gig attracted a decent-sized crowd for the small venue. As people started filling the room, they edged their way forward towards the front of the stage, and sat down to await the arrival of the band. Once they came on stage, everyone immediately took to their feet to welcome them, eager and ready for them to begin their set.

To kick-start the night, they played ‘Atlantis’, setting the tone for the remaining 40 minutes of the set – a tone that was laid back, and made for enjoyable easy-listening. The whole atmosphere was very chilled and relaxed, and although this may have had something to do with the size of the venue, I think that even with a larger audience they would have had the power to create a calm ambience in the air.

With meaningful lyrics and rhythmic guitar chords, Seafret are all set to climb to success. Having already had a taste of what it’s like, supporting some top names like James Bay and Hozier, I can only imagine their hunger for more – and there will be plenty of people on board to see them succeed too. They’re a breath of fresh air that would be a great addition to anyone’s chilled Sunday afternoon playlist.

If you want to know where some of their musical influences come from, you just have to look to their East Coast home roots. As you look through the track listing of their album, you notice songs with names like ‘Oceans’, ‘To The Sea’, and of course ‘Atlantis’, which we heard that night. From their lyrics to the band name itself, the sea has naturally found a way to shape the band into who they are and what they produce, and it’s really worked for them.

After playing a few pre-selected tracks from the album, they did an encore of ‘Be There’, which was requested by the audience. This one was slightly more up-tempo, especially during the chorus, and was a definite favourite. It ended the gig on a high, and looking around, I couldn’t see one dissatisfied person in the audience.

With the venue being so small, it gave the band the opportunity to interact with the crowd throughout the gig on a more personal level. Vocalist Jack Sedman mentioned that he recognised a few faces in the audience, which demonstrated their appreciation for their fans. Sedman and his bandmate, guitarist Harry Draper, were also eager to encourage the crowd – faces new and old – to stick around after the performance for a chat while they signed albums.

To finish the gig, not only did the band thank everybody for taking time out of their lives to come and watch them, but they thanked Crash Records for hosting them too. They didn’t lose sight of what the performance was all about though, ensuring that they dropped in a quick light-hearted promotion – reminding people to grab a copy of ‘Tell Me It’s Real’.

Sedman and Draper are both so likeable, and if anyone deserves success I believe they do. It was clear to see how humbled they were to have the support of those who turned up, and of those who had already bought their album. I certainly only have fantastic things to say about them.