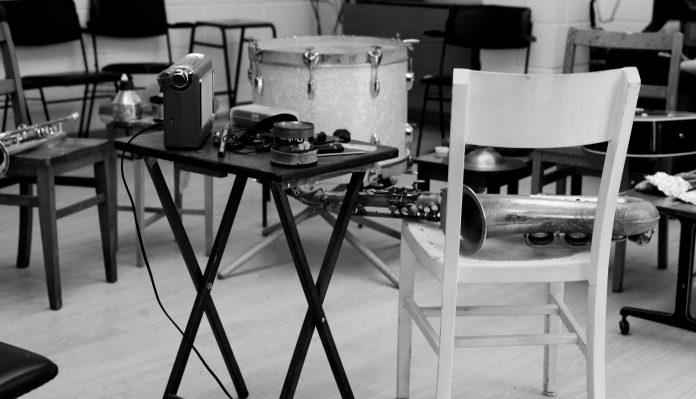 The launch event was to mark the start of a month-long exhibition by visual artist Mio Ebisu (Tokyo) and sound artist Sam Andreae (Manchester). In the blurb they describe their work as ‘focussed on the half-seen and mis-heard, movement from stillness, stillness from movement, the properties of sound as a time-based medium and art on canvas as a stationary object within a space and the ways these properties can be distorted’.

You might be forgiven for thinking that is a tad pretentious, but the overall effect has an honest and thought-provoking quality to it. Mio had transformed Fundevogel’s smallish peformance area with what she describes as ‘space collage – not imposing but inhabiting the space. The aim is not to make people stand and look, but leading the eye through the space with colour and shape.’

The opening night performance – which combined Mio’s space collage with a sound performance by Sam and guest performer, Matilda Rolfsson (from Sweden), certainly had the audience listening to everyday noises with a dedicated intensity that would have allowed you to hear a pin drop. Except it wasn’t pins that broke the moments of silence, but the familiar yet not quite pin-downable noises of several machines that Sam had set up around the round, amidst Mio’s visual creations.

There were pendulums on wires, a small mechanism in a cup, something hidden in the bookcase – all of these generated sounds that reminded you of … well opinions differed. This viewer heard a fly caught in light, a slightly faulty fan, an old-fashioned alarm clock … but other audience members had their own interpretations – which lead to lively discussion during the interval. However Sam explained that each sound was created by a simple mechanism and was meant to be whatever we heard it to be.

What also really intrigued the audience was the cry of geese and the steady clang of church bells (which seemed to be coming through a crackly old radio that Sam tuned and retuned). These sounds, it turned out, were being recorded live from a microphone position on the canal bank, just outside Fundevogel.

There were instruments as well as mechanisms. During the performance Sam played saxophone – focused far more on the amplification of his own breath, the effects he could make with an old paint pot manipulated in the bowl of the instrument and the discordance of sharp sometimes screechy sound, than anything you’d see in a jazz band.

Matilda Rolfsson brought a bass drum to the mix which she ‘played’ with a succession of percussion instruments and found objects – tapping it with a bow or fingers, resting Tibetan bowls on the drumskin and striking them with a bell, teasing the head of the drum with brushes, or creating haunting notes with cymbals swept across the surface. The sounds ranged from pleasingly harmonious to physically jarring sounds – some reminiscent of fingernails on blackboards – and there were moments when the audience were ready to break free from their seats to escape from the discomfort they caused.

The pair have clearly worked together many times and there’s a visible synergy between them. ‘It’s a constant dialogue with yourself, the music and the person you are playing with,’ Matilda explains. Everything however is unrehearsed and together with Sam she is constantly choosing instruments which react to the space Mio’s artwork has created, the cafe itself and the presence of the audience. When our camera clicked loudly during a quiet moment, Matilda and Sam simply incorporated that into their performance.

After the interval there was a performance by Pip (NO) an improvisational acoustic duo made up of Fredrik Rasten on guitar and Torstein Larvik on trumpet. This pair, who come from Oslo, describe themselves as ‘focusing on rich textures with gradual change. With inspiration from contemporary electronic music and minimalism, the duo searches for the meeting point between the static and the organic’.

Pip’s set was intense, focused and intricate, but somehow lacked the excitement and originality of the previous performance. Maybe just after you’ve seen one person using scrubbing brushes on a drum and listened to live geese, you’re less excited by seeing someone play the guitar with a bound bow that doubled as a drum stick, and a tiny circular windy instrument, reminiscent of a hurdy gurdy, held against the strings. However it was hard not to engage with what seemed like a intricate ‘sound story’ and my companion and I both ‘heard’ the build up of a storm, the intermittent patterns of rain, and then the onslaught of strong winds that blew unforgivingly across a flattened, desolate landscape. There was even a moment when it seemed that some crude form of industrial machines had taken over the landscape and this reviewer found herself picturing smoke stacks with flip lids – reminiscent of those on old steam trains.

However my companion commented that the piece didn’t really ‘go anywhere’ and I was a little inclined to agree with this. But maybe it was unfair to judge this after the startling originality of the previous performance – and the audience certainly applauded very enthusiastically at the end of Pip’s set.

Altogether it was a very interesting evening – you’d hardly use the word enjoyable because that clearly isn’t the intention of any of the performers. However you couldn’t help but leave the evening full of thoughts and ideas about the nature of sound and how it affects us.

And my last word of the night goes to the absolutely delicious dal that Fundevogel served with bread and salad in a metal basin. This out-of-the way venue – which has recently simplified its food menu to focus more on events – now needs bigger audiences to do justice to the projects it’s showcasing.