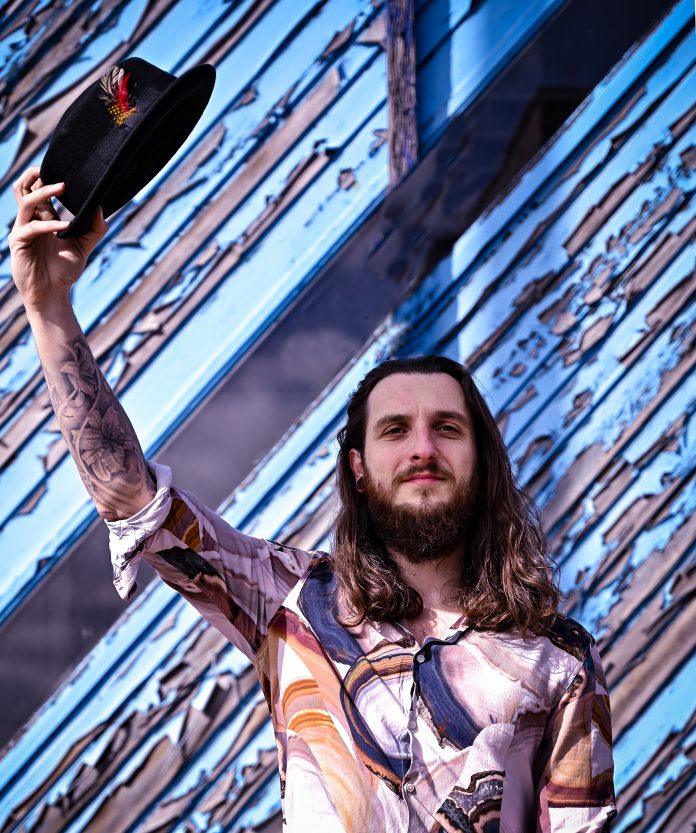 I’ve been reviewing – and raving about; both in print and to anyone who’ll listen – Liam’s music for some time now. Over the past few months Liam has been releasing a string of songs on a regular basis – every 6 weeks to be precise – which has been wonderful but I wanted to find out why. So the time seemed very much right to delve into his musical world and find out more about him.

But first. for those of you that haven’t come across him or his music, I’ll set the scene. I guess that if I was to reach for an easy way of describing his style I’d say ‘singer/songwriter’. I realise that this is more of a job title (so to speak) but it does come with some sort of assumption about a musical style. But I have to admit this is a lazy approach, and I think I need to be specific.

Liam writes songs about personal experiences and about how things we all experience affect him. His words are deeply moving, poetic and compelling. He sings these words over carefully crafted music that can be sparse or with a band feel in various styles – folk, Americana, rock to name a few. The key thing with his music is that the sound and feel always suits the words and the topic of the song.

He’s one of those artists that I always include when people ask me about artists or bands I’ve discovered – and love – while working on LSF. There are lots of great singer/songwriters in Yorkshire but I feel Liam has something very special musically – it’s that combination of beautiful words and fabulous music in perfect harmony.

That said, let’s dive in…

LSF: I’m trying not to use the word journey here, but how did you get to here musically speaking?

Liam: I’ve been making music since my early teens and never really stopped. I started playing drums when I was around 10 and then guitar when I was around 14. I used to record my own songs on a little 4 track recorder, showing my age now! From then later into my teens I played drums in a few metalcore/hardcore type bands before making the jump to fronting a band. After that I was in a band called No Trays or Foxes, we wrote loads of songs and did loads of gigs but just never seemed to get going, there’s still plenty of stuff online if people are interested! Once that band ground to a halt, in the ways bands often do, I recorded my first solo EP ‘Restless’ and in the wake of that put a band together and started gigging. The follow on EP ‘The News I Needed’ was released in 2018. Since then I have decided to put more emphasis on releasing singles as then I can have a higher output and keep things moving along!

LSF: One of the things I really like about your songs is that they seem very personal – reflecting either situations as you experience them or your emotional life. Is this an important aspect of your songwriting for you? And, if you don’t mind me asking. Why?

Liam: Songwriting has always been cathartic for me and the only thing I really know how to write about is the world as I see it. I feel that my strength as a songwriter and a lyricist comes from trying to speak the truth in my songs, I can only speak my own truth but I feel that other people can usually relate to honesty. If I look back at my back catalogue I can tell you exactly what was going on in my life. I have tried to write more abstract lyrics but I just find myself coming back to simple poetic truth.

LSF: Have you ever considered a topic or experience for a song, or even got as far as writing and recording a song, and decided that it’s too revealing? Or decided ‘well that’s one just for me’ in the same way therapists sometimes suggest writing a letter to somebody but not sending it – the act of writing it is cathartic, and that’s enough

Liam: I haven’t yet found a subject that is too personal. In my back catalogue, I have songs about the death of family members, breakdowns in relationships and other subjects such as losing my voice. The act of writing definitely helps to ease the pain sometimes but I have never shied away from releasing material like that. Sometimes it can cause a little bit of friction if the other person that the song is about feels that I am airing dirty laundry so to speak.

LSF: Musically you seem to surprise the listener with every release – sometimes it’s sparse and acoustic, sometimes a full-on sound. And vary the style of the music. Is this because, as I have always thought, because you write and arrange the music to suit the song, or just because you fancy changing it up?

Liam: The last few releases are the product of a few years of recording in different set ups. Sometimes I record with my band, other times I have just recorded with me and the guitar and a couple of the releases I worked on remotely during lockdown with my friend. I’ve had a lot of these songs backed up for a while because I was unsure how they all fit together. Then I realised that even though they do all sound relatively different, they are all worthwhile songs and that I shouldn’t be saving them for a rainy day, I should put them out there and continue to move forward. I am still trying to produce songs with different people and in different scenarios as this keeps songwriting interesting for me.

LSF: How do your songs come together? Does the idea come first and then you write words? Or do the words come to you first? Or even, just to cover all the bases, does the music come first?

Liam: The process varies from song to song. I’d say usually I have a lyric in my head, usually just one or two lines that float around in there for a while, then it will get coupled with a little riff or melody and I go from there. I used to beat myself up as I am quite a slow songwriter, sometimes songs can take months and months to come together. Now I realise that that is ok, but to be sure to make time to write. I find huge benefit in setting time aside to sit and try and write something, even if something terrible comes out it is better than just waiting for inspiration to hit.

LSF: Why did you decide to release a new song every 6 weeks? To me as a non-musician this seems like an almost impossible schedule to keep up with.

Liam: As I mentioned I had quite a few songs backed up so I decided to put those all out first, this schedule also gives me a push to be more consistently creative. I also think that, with the world the way it is, if you are putting out 1 song or an EP a year it isn’t really enough, people will quickly forget you and you won’t be able to build up any momentum. I feel like this way people are invested in the journey and as a result will connect more with the songs. It’s a slow process but I definitely feel as though people are starting to know me as a consistent songwriter, so that’s something! I also went to see Tom Robinson do a talk at the 360 club in Leeds last year. He said that the best thing you can do for your career as a songwriter is to produce and put out as much material as possible. It only takes one song to break through to the next level and your chances of finding that one song are greatly increased with consistency.

LSF: When’s the next release due? Could you tell me something about the song and the inspiration

Liam: My next release is a song called ‘Jerusalem’ I postponed the release a while ago because of the situation in Israel, but I’m trying again on July 2nd. This one is another personal one for me. My friend asked me to do the great honour of being Godfather to his twin children. This started me thinking about religion and spirituality. I had never considered myself religious before, but I did read some biblical stories and find some meaning and comfort in them. ‘Jerusalem’ is taking some of these stories and relaying them to my life.

Liam: One of my all time songwriting heroes is Loudon Wainwright III, he alternates between very silly, almost comedic songs, and very emotional and beautiful songs. I love the honesty and rawness of his lyrics and this has been a big inspiration to me. Another band I like but who have a very different style are Sleaford Mods. This is again driven by the lyricism and the way Jason Williamson uses language. I have also been listening pretty relentlessly to Future Islands for quite some time!

LSF: Now that, hopefully, we can see the light at the end of the long dark tunnel of lockdown; do you have any plans to play live?

Liam: Yes I have a couple of dates in the pipeline with my band. Nothing set in stone just yet but I’m working on it! I am also out playing solo quite regularly, I do plenty of pub gigs around Yorkshire and I’m loving playing live again.

LSF: Apart from continuing on the ‘release every 6 weeks project’ do you have any other musical plans, or anything upcoming that you’d be prepared to share?

Liam: My plan is just to keep on keeping on. The every 6 week project keeps me quite busy so I’m aiming to keep my consistency up, there’s plenty more where that came from!

Keep up to date with Liam

All the links in one place: https://linktr.ee/LiamSullivanMusic